German churches see rise in baptisms for refugees | Germany | News and in-depth reporting from Berlin and beyond | DW | 09.05.2017

Thousands of refugees in Germany are converting from Islam to Christianity, although it could carry a huge personal risk for them. Independent churches are especially seeing many new converts. 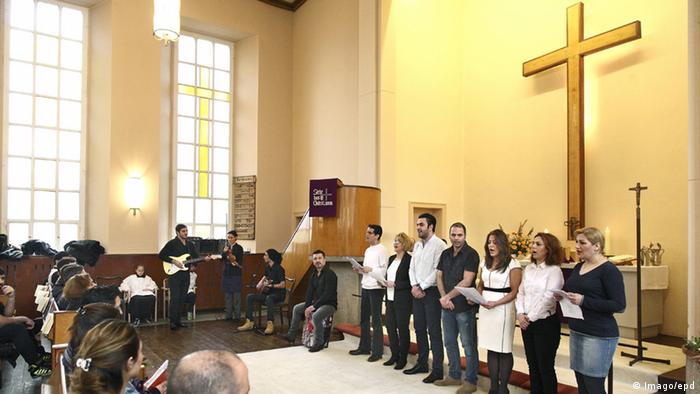 Gottfried Martens, a pastor at the Protestant Trinity independent church in Berlin, has already baptized 1200 refugees. He started in 2008 with two refugees from Iran who sought out his congregation. They brought an acquaintance with them, who Pastor Martens baptized. Over the years, more and more refugees came with the desire to change their religion. Now Marten's congregation is well known in Berlin, as hundreds attend sermons there that are given in both German and Persian.

The Iranian and Afghan converts are originally of the Islamic faith. Many of them are "newcomers" who were introduced to the congregation by other Christians. "Many were also in private house-held congregations in Iran or were touched by the Christian faith during their escape journey," Martens told DW.

"We had to move to another church because there is not enough space. The high point came when the Balkan route was closed," he said. During the so-called refugee crisis at the beginning of 2016, there were around 250 participants at pre-baptism courses at the Trinity Church. Usually Pastor Martens only teaches around 30 people per course.

All of the people that Martens baptized are refugees that speak Persian or some dialect of the language. "For these people it is very important that our congregation is bilingual." Some of them are waiting for a decision in their asylum process while others have asylum applications that have been rejected. They spend three months in the preparatory courses and then afterwards they have a test in which they have to tell Martens their personal reasons behind the conversion. "There were around 300 people we had to reject," he said. Others were baptized and received a certificate. 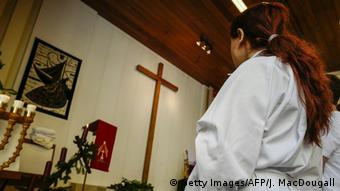 Conversion can be especially risky for female refugees, Martens said

Most of the converted congregation members live in refugee accommodations. "They tell other people from their countries about the congregation and then new people come." Martens is happy about this interest in the congregation and says the refugees are a blessing. "After everything they've been through, I am very thankful that they trust in God and join our congregation."

The so-called national churches, which include Roman Catholic and Protestant churches in Germany, are also witnessing a high number of baptisms. Although conversions are not recorded separately, "in recent years there has been a noticeable increase in refugee baptisms," Carsten Split of the Protestant Church in Germany (EKD) told DW. The number of protestant baptisms of people over 14 years old has risen, from around 17,000 in 2014 to 178,408 in 2015.

The number of baptisms in self-organized independent churches such as the Trinity church is not recorded. The Persian Pentecostal "Alpha and Omega" congregation in Hamburg is also very popular with refugees from Iranian and Afghan backgrounds. On Ascension Day last year the Pastor there, Albert Babjan, did a public mass baptism of 80 refugees in the city park.

The conversion itself, however, carries many risks. Converts to Christianity are exposed to hostility - in Iran and Afghanistan they face religious persecution. In some instances they could be dealt the death penalty. In the past years there have been more and more reports about converts being attacked in Germany. Pastor Martens says that the refugees who come to his congregation can no longer live in their shelters without being bothered by others.

"Right now we have five people with us who have been assaulted. One has lost some of his teeth and one of the others has a wound that had to be sewn up. " The authorities, according to Martens, haven't reacted. The security personnel are mostly on the side of the attackers and even though the police are involved "they are not looking further into the matter."

It's gone so far that the converts are secretly sneaking out of the refugee homes to attend the church services and are hiding their cross necklaces which they receive after baptism. One refugee convert who was attacked and filed a complaint then received 10 complaints from the other residents saying that he assaulted Muslim women. These claims were made up and served as a way to intimidate him. 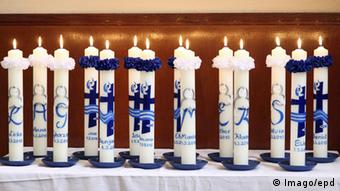 Candles celebrating those who have been baptized

The aggression towards converts is not new, the Pastor confirmed, but has become normalized. The attacks are partly the other people of the same nationalities of the converts but also "radical Muslims from different countries." Although he knows the change of faith represents a danger for people, Marten carries out the baptisms, as do many other churches in Germany.

Reports in the German media describe how missionaries have promoted conversion to the refugees for better chances at staying in Germany. Public broadcaster "Deutschlandfunk" reported of rapid conversions in private apartments by cult-like congregations and of missionaries proselytizing to the refugees. Missionaries targeted Afghan refugees who were threatened with deportation.

According to the Federal Office of Migration and Refugees (BAMF), conversion is "self-created grounds subsequent to fleeing." When the conversion could lead to the refugee being persecuted in their home country, the case has to be examined further. "The conversion of an asylum seeker will be considered in the asylum application if it is credible," the BAMF told German news outlet "Spiegel Online." The decision makers in the asylum process have to judge whether the change of faith was due to real convictions or if it was done due to tactical reasons.

"I make it very clear from the beginning, that conversion and baptism do not increase the chances of receiving asylum, rather, it could make it worse," Martens emphasized. Christian asylum seekers often receive negative responses from the BAMF.  "The BAMF will hardly look at the application if they see it is a Christian from Iran." Some of those Martens has baptized have already been deported.

Attacks on refugee centers in Germany have fallen and are now on par with levels prior to 2015, according to a newspaper report. The Left Party has warned, however, that the number is still too high. (09.05.2017)

The European Court of Justice ruled that Hungary's deportation of refugees to Serbia was unlawful. But Viktor Orban's national-conservative government is ignoring the judgement — and continuing to deport refugees.