′The conditions are catastrophic′ — Inside Germany′s factory farms | Environment | All topics from climate change to conservation | DW | 23.10.2020

From cramming livestock together in crates to needlessly brutal methods of slaughter, the factory farming industry has repeatedly been accused of engaging in animal abuse for the sake of profit. Yet, it remains incredibly difficult for journalists to gain access to slaughterhouses and verify these claims.

To get a clearer picture of what actually goes on inside factory farms, DW spoke with someone who knows the industry better than most — retired butcher and food inspector Franz Voll. Parts of this interview are included in DW's environment podcast "On The Green Fence".

DW: What are factory farming conditions like in Germany?

Franz Voll: The conditions are catastrophic, of course. But the main reason for that is that farms with intensive livestock breeding are dependent on the meat industry and in some cases are controlled by it. And it's just all about money, nothing else, just profit and gains.

In the industry, there are both pre-arranged and random checks, carried out by the veterinary authorities. You were a part of that system as an inspector. How did the inspections work? 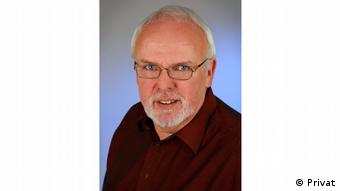 Let's take a food inspection in a large industrial setting. You arrive at the front gate, then you need about half an hour before the right person comes to pick you up. Then you go into a hygienic room and get changed before entering the plant. So theoretically they would have about 45 minutes to clean things up.  Whether or not they do that, I can't say.

A large factory is normally inspected by one veterinarian and one inspector. That's no way near enough because these factories are huge — two people can't inspect all of that, and definitely not in just three hours. You need five people at least, and they should be there for at least one full day. So that's the first mistake.

A rare glimpse inside an abattoir 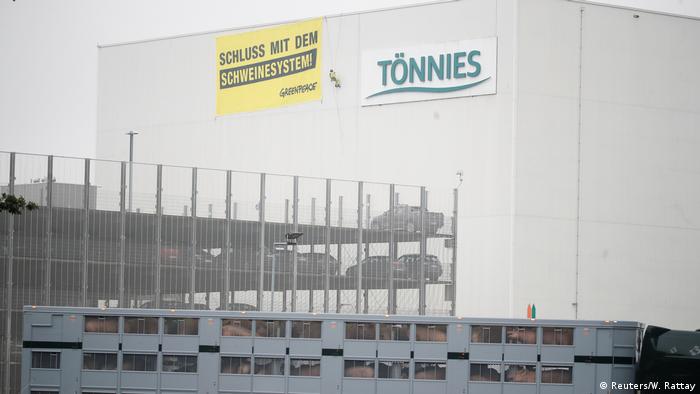 A truck full of pigs arrives at Germany's largest slaughterhouse Tönnies, while a Greenpeace activist unfurls a banner which reads 'End the swine system'

Read more:Undercover videos of organic chicken farms can be aired

We asked around at some factories ourselves but got no responses, so it's not easy for journalists to get inside either.  Is that a reason why so few violations get reported?

First off, these buildings are generally barred from the public like nuclear facilities.

The next problem is that inspectors can't go public with anything we find. So if we do find something, we start a process. Whether that's for a fine or criminal proceedings, it all happens behind closed doors, and that's the end of it. So, none of us are allowed to leave and say, let's give my friend at the newspaper a call and tell him what's going on. That's not allowed. 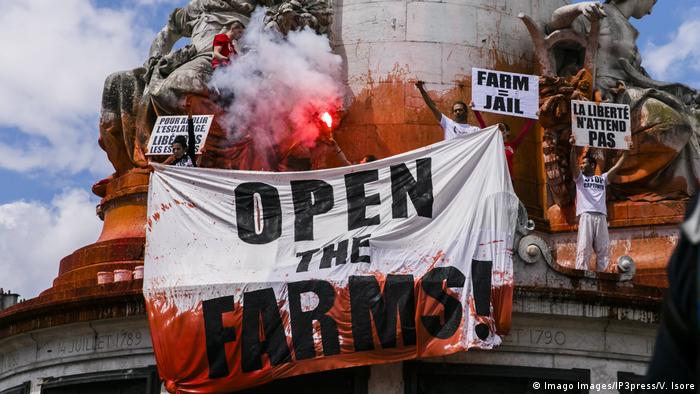 Slaughterhouses are no strangers to protests from activists 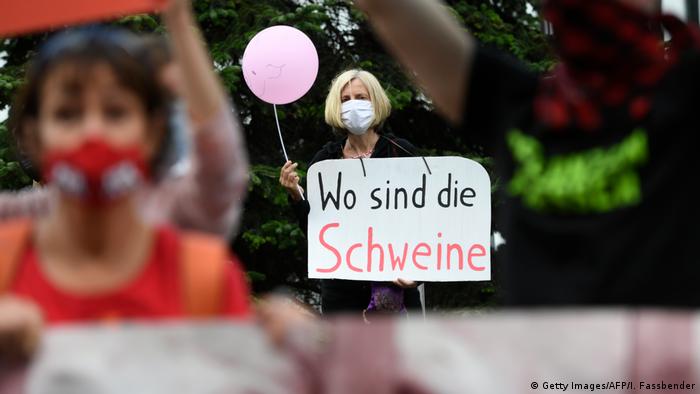 A protestor holds a sign that reads 'where are the pigs?' in front of the headquarters of German abattoir company Tönnies

Another question about the inspections, about the fines that are imposed when there's something wrong. Do these really serve to deter these companies?

When I was training, these companies were already making big profits. And that hasn't changed. Throughout my entire career, we never imposed a four figure fine.

Is that the reason the cheap meat industry is so hard to crack?

The main reason is definitely the inspections. We need to get away from these being organized on a local or even state level. It has to be at least on the national level. Ideally, the checks would be carried out by EU regulatory authorities.

You worked in a slaughterhouse, is that right?

I worked as a slaughterer from 1980-81— I stood at the conveyor belt, and I cut open dead pigs and took out their guts and kidneys. There are 20 stations and each person does one part of the process. Back then it was still quite humane, we only slaughtered 3,000 pigs per day. These days, with 25,000 pigs being slaughtered a day, things have not improved — especially not for the animals. 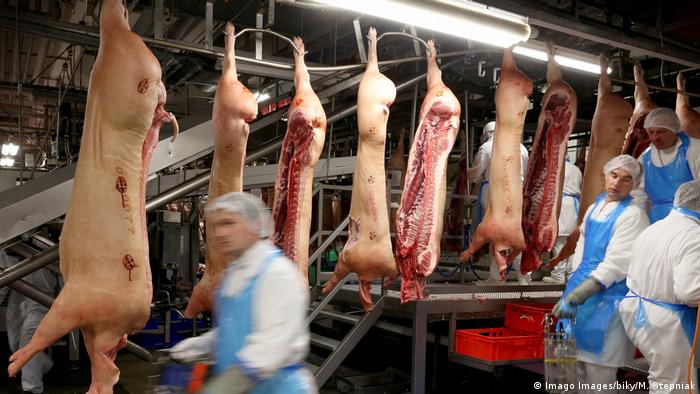 Up to 25,000 pigs are now slaughtered every day in Germany 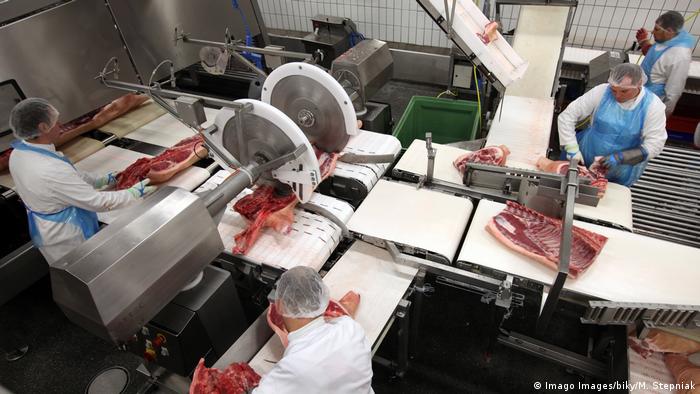 While butchers used to have a more personal connection with the animals, today everything is done on a much bigger scale

You're a meat-eater and you enjoy eating meat. How much did you pay for it last time you bought it?

For us as consumers, when we go to the supermarket and buy meat, what exactly are we buying?

You're buying a piece of beef that no one can tell you where it comes from. Even if it says on the packaging that it's from a cow that was born, raised and slaughtered in Germany. That may be true, but it is not necessarily the case.

It works like this. Cows have ear tags. The butchers remove them before butchering the cows. And these ear tag numbers are not printed on the labels. But at the end of the day, let's say that butcher has butchered 1,000 cows, that meat will all get the same number printed on the packaging. But the meat butchered that day comes from cows from Farmer Müller, Farmer Maier, but also from the US, Greece, and it's all mixed and packaged together. 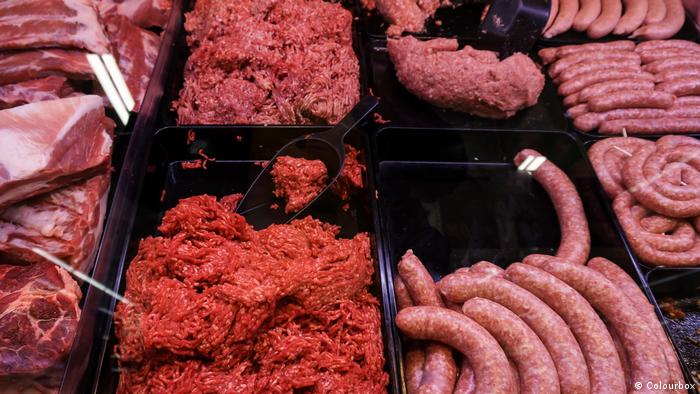 Most consumers buy their meat in a supermarket 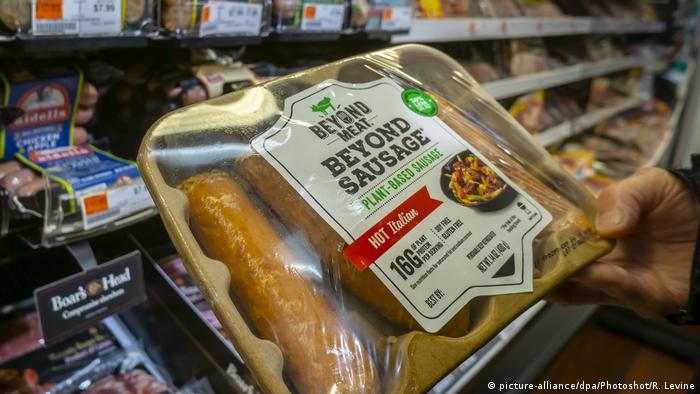 Read more: Butchering on demand — the way to a sustainable steak?

Can you remember the first animal you slaughtered?

Of course. It was a bull, and it's incredible but I can still remember that its market number, cut into its ear with scissors, was 291. I'll never forget that.  We brought it back to the slaughterhouse, and then a steel bolt was shot into its head with a special tool, and it collapsed. But its not dead, it's just brain dead. Its heart has to keep pumping so the blood comes out. It was strange when it fell down and spasmed. It gave me a strange feeling.  Then it was pierced and a huge fountain of blood ran out. And I have to say at that point I did ask myself if I had chosen the right job. But I stuck at it.

Do you think everyone should have that kind of experience?

That would be important. That's what it used to be like in the villages. And everyone who saw it treats animals with a different kind of respect. And then maybe it would be a bit easier for people to understand that they should eat less meat.

Everyone should see an animal being slaughtered; it should be a school trip. You have a different connection to the animal if you know it has had a good life and lived well for as long as possible, and it has died for me so that I have something to put on my plate.

Franz Voll is a retired butcher and food inspector who worked in the German meat industry for 50 years. He has written several books on the dubious practices of factory farms and has openly criticized major companies in the industry.