Justice Minister Sergio Moro wants Brazil to deport "dangerous foreigners." Observers believe that the threat is aimed at the US journalist Glenn Greenwald, whose Intercept has aggressively reported on Moro's conduct. 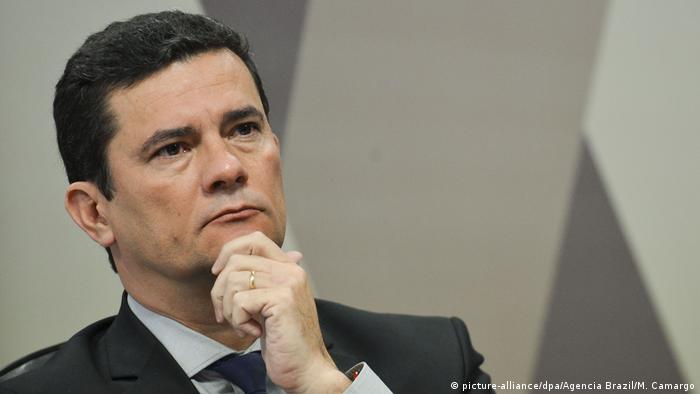 On Friday, Justice Minister Sergio Moro issued a decree, provocatively titled No. 666, that would expedite the deportation of noncitizens whom the government alleges pose a threat to Brazil — or even bar them from entering the country at all. Many observers call the timing curious.

"Nothing has happened in Brazil that would warrant such a decree," Tania Maria de Oliveira, of the ABJD jurist association, told DW.

About 11,000 people with official refugee status live in Brazil. Close to 160,000 applications are pending. "We have very few illegal immigrants," Oliveira said, "The numbers are low — so there are no grounds for this decree."

Under Moro's decree, people denied permission to remain would have to formally object within 48 hours — rather than the 60 days currently allotted. The decree would also allow for deportations should authorities allege that people may pose a danger to the country. The law would even permit deportations based on intelligence by foreign agencies.

Thiago Amparo, a law professor who works with the FGV education foundation, called Moro's decree problematic in that it "prevents immigrants from making use of their rights." Amparo said Brazil was echoing the "tough anti-immigrant rhetoric" of the regimes in the United States, Poland and Hungary.

The public defender Joao Chaves told DW that the decree came as a complete surprise to immigration specialists, Brazil, he said, has historically naturalized people with unauthorized status rather than deporting them. Chaves said, Brazil's 2017 migration law requires a guilty verdict in court before a deportation can advance. The law had also banned holding people prisoner ahead of deportation.

In many cases, Chaves said, Brazil has been well ahead of other countries — including Germany, where in many cases asylum applicants must wait for official decisions before searching for jobs or longer-term homes. "Brazil is more efficient because we issue refugees the necessary documents so they can lead proper lives," he said.

Chaves said noncitizens should be entitled to the same legal recourse as citizens. "Not even German courts would accept this despite Germany's strict laws," Chaves said. He added that the numerous violations of the 2017 law should automatically render Moro's decree unconstitutional.

"The government's new stance on immigration is comparable to the US position," Chaves said, "which does not make it a good approach." Chaves said Brazil should instead look to its own past in determining the future: "We should not follow their model, and instead stick to the South American tradition and make life easy for refugees." He added that the number of Brazilians moving abroad is three times higher than that of noncitizens attempting to take up residency in the country.

A major foe of President Jair Bolsonaro's is the US investigative journalist Glenn Greenwald, whose platform, The Intercept, recently leaked chat conversations that cast a particularly bad light on Moro and the investigators involved in Operation Car Wash, which led to the imprisonment of the wildly popular former president Luiz Inacio Lula da Silva.

The chats published by The Intercept showed Moro, a judge at the time, communicating with officials involved with the dubious prosecution of Lula in a corruption case that eventually led to his being declared ineligible to run for the presidency in 2018. Bolsonaro, who had polled weakly against Lula, eventually won the election in a runoff and installed Moro as his justice minister.

Greenwald reported that the chats were provided by an anonymous source. But over the weekend Bolsonaro and several minsters demanded the journalist be jailed. They allege that Greenwald had orchestrated a hacking operation through which the chat conversations became public. The president has complained that under current laws Greenwald cannot be deported as he has two adopted Brazilian children, and has labeled the journalist a "villain."

So, instead of expelling Greenwald, Bolsonaro has threatened to "jail him for a couple of years." On Monday, Brazilian government officials accused the journalist of having engaged in illegal practices to obtain the chat conversations.

"This is the typical Bolsonaro response to bad press," said Marina Iemini Atoji, of the Brazilian investigative journalism association ABRAJI. The president "tries to intimidate journalists," she added. That means that Bolsonaro "poses a danger to press freedom."