The AfD in Saxony: Germany′s far-right stronghold | Germany | News and in-depth reporting from Berlin and beyond | DW | 14.09.2021 The AfD's Tino Chrupalla has his home base in Görlitz

Whenever Tino Chrupalla travels to the German capital of Berlin, he needs police protection. He is the co-leader of the Alternative for Germany (AfD), which people in the capital regard as a far-right party that stirs up hatred against immigrants with racist slogans and whose members sometimes attract attention for their proximity to National Socialism or its relativization.

By contrast, when Chrupalla is in the Upper Lusatia (Oberlausitz) traditional region of Saxony, he is met with friendly greetings and handshakes, despite the coronavirus pandemic. He is at home in this area, and Berlin — though geographically close — feels far, far away. 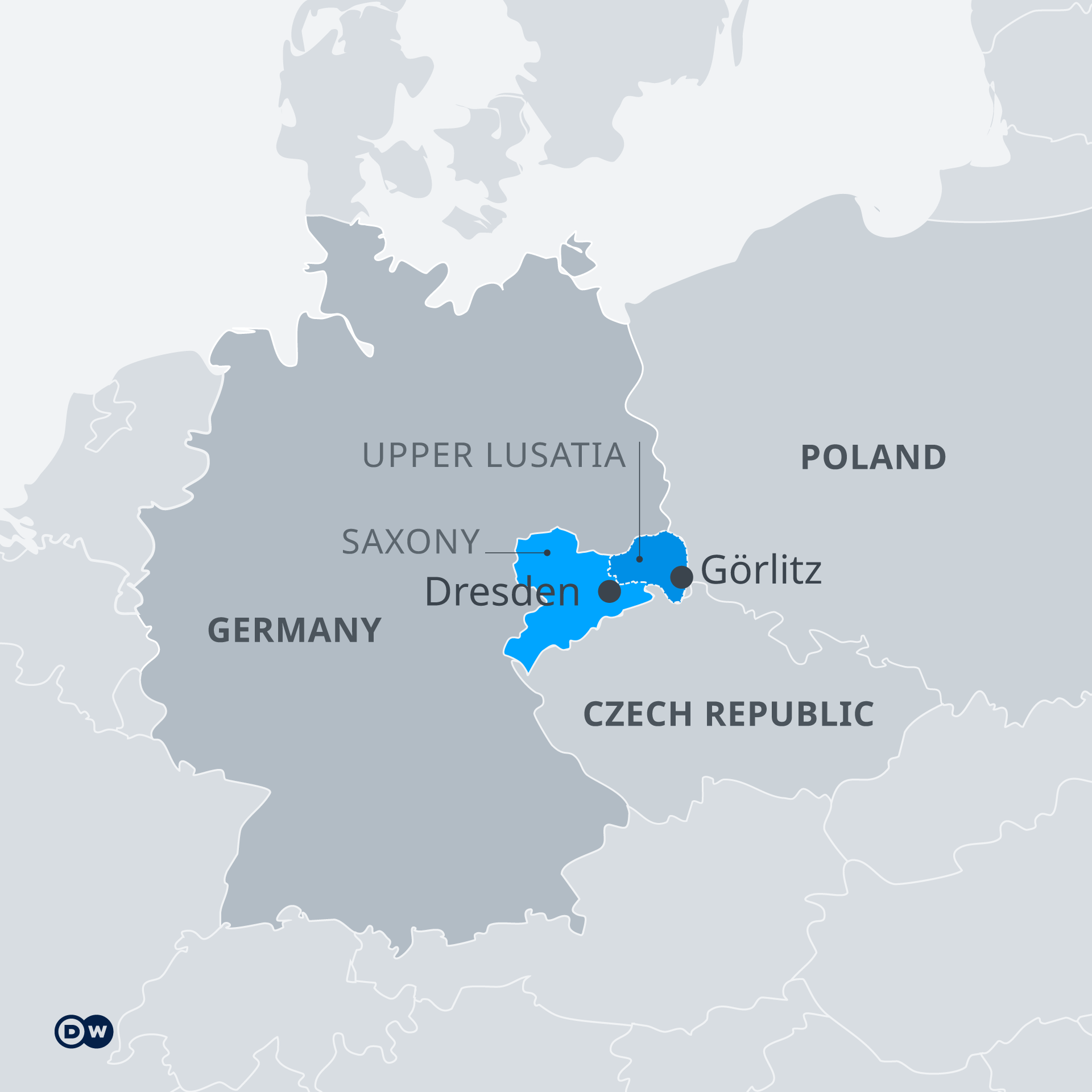 He won his constituency of Görlitz for the far-right populist AfD party during the last Bundestag election four years ago with more than 32% of the vote.

He now intends to repeat that success.

On a weekday at lunchtime in September, Chrupalla is out campaigning on the streets of Löbau, a small city of about 15,000 residents that lies about 35 kilometers (22 miles) north of the border with the Czech Republic. He is relaxed, standing under a parasol, ready to talk.

There's not much going on at the campaign stand. Heiner Putzmann is among the passersby. He is born and bred in Löbau, he tells Chrupalla: "I was a home birth. Winter of 1952. It was freezing cold," he says, and goes on to tells how "life is quite good" in Upper Lusatia. Beautiful mountains, chic cities. "That's why we live here and never want to live in a big city." But the infrastructure is bad, and there are far too many burglaries and car thefts. Putzmann's concerns are shared by many in the region, even though crime rates have been falling for years. 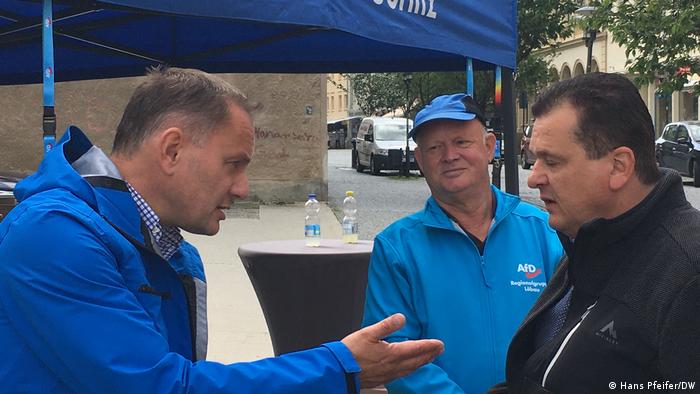 Here in the Upper Lusatia region, Chrupalla is simply the master craftsman with his own painting and decorating business who, in a down-to-earth way, fights for ordinary people. "The workers and those who really add value no longer feel politically represented," he tells DW at his election booth.

His sentiments strike a chord with many people in the region.

No room for refugees and gender-inclusive language

Black Lives Matter, gender-neutral language, the rights of LGBTQ people, the situation in Afghanistan and Syria — these debates are not of particular interest here. At most, they serve as topics that evoke anxieties.

"The politicians in Berlin and Dresden [the state capital] must finally take care of their own people before they carry their own people's money abroad," says Chrupalla. 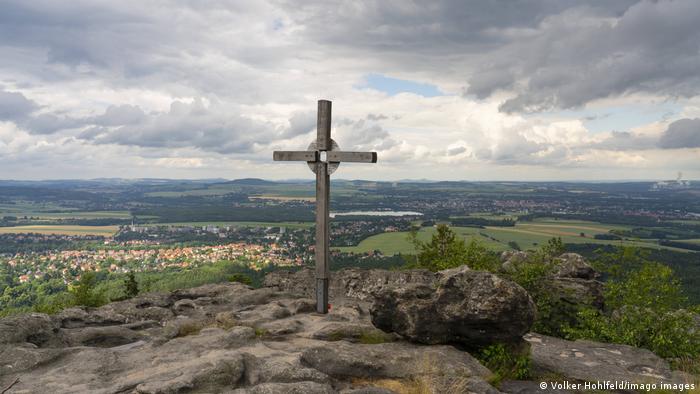 This only intensified as young and more educated people moved away as quickly as they could. Today, the region of Upper Lusatia is one of the most economically underdeveloped in Germany — and a stronghold for far-right parties like the AfD.

Bernd Stracke has been fighting against right-wing extremist structures on the ground since the late 1990s. At that time, he voluntarily moved to Upper Lusatia. "My parents and friends were shocked: "Are you out of your mind?" they asked him.

As a punk musician, Stracke was an enemy of the state back in the socialist GDR. He stuck out like a sore thumb. In GDR times, the Upper Lusatia region was already considered a cut-off point for the "valley of the clueless" ("Tal der Ahnungslosen") — an East German slang term for places where there was no reception for television broadcasts from West Germany.

Today, Stracke is an adviser to the state premier of Saxony — his job is to bring citizens and politicians together. His position is a recognition that many cities, municipalities, and families are torn between social awakening and a reactionary renunciation of modern democracy.

Stracke is tasked with promoting a new sense of cohesion. He calls it a revolution from within — because the change cannot be prescribed from the outside of that society. "We are now seeing this in Afghanistan too. It doesn't work. Importing new ideas and mindsets here won't work."

Bernd Stracke engages in dialogue — also with the AfD. "It takes a certain aptitude for tolerance to withstand things that are different from what you think yourself." 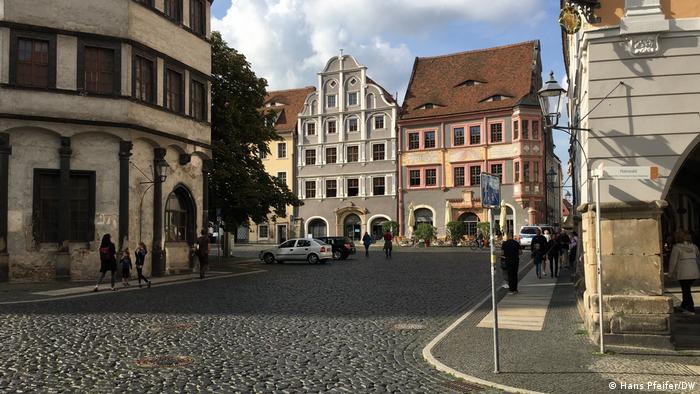 Upper Lusatia is a region full of contrasts: Some cities still look like ruins of the defunct GDR. In contrast, the city of Görlitz is a tourist magnet. Görlitz was spared the bombs of World War II. Immaculate old streets lined with grand historic buildings have also attracted Hollywood blockbusters: Quentin Tarantino shot his 2009 film Inglourious Basterds here, bringing the Nazi era back to life. The city has proudly dubbed itself "Görliwood" due to the many film productions.

At the Kretscham inn in the small village of Lawalde, Tino Chrupalla is holding an election campaign rally. About 300 people crowd in. Despite the close quarters and ongoing coronavirus pandemic, nobody is wearing a mask.

This DW reporter, who is wearing a protective face covering, is eyed with looks ranging from mocking to hostile. At the door stands a young man in noticeably neo-Nazi dress. His neighbor's arm is tattooed with skulls. Every second arrival greets him — they seem to all know each other.

Most of the attendees are retirees. "Bürgerlich" (middle class), as they say in Germany. But among them, there are also those with the skull tattoos — some featuring runes popular in the Nazi era, some with bullet casings slung over their heads. The crossover between far-right and right-wing extremist is fluid here. 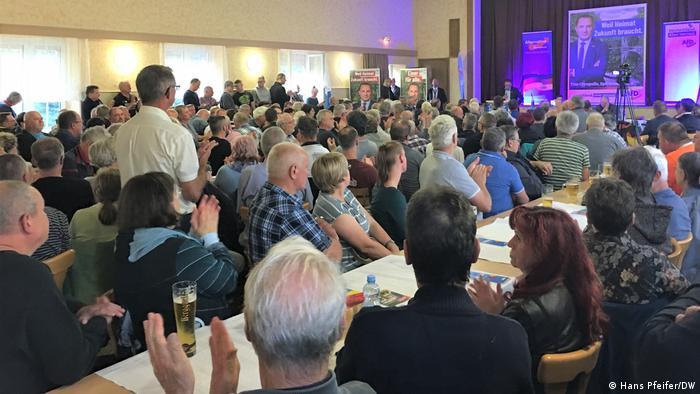 At the Kretscham inn, Tino Chrupalla performs to a home crowd

In this environment, Chrupalla makes no attempt to distance himself from the more extreme right wing of his party. It was this group that elected him as one of the party's two top candidates in the German federal election.

When he speaks here warning of erosion of supposed German virtues, of overdue deportations to foreign countries, of an impending progressive dictatorship, a resounding "Jawoll!" ("yes Sir") echoes through the hall.

With his supposedly pragmatic course, Chrupalla has come a long way in the AfD. And he has an announcement for his voters in Upper Lusatia: from 2025, the AfD intends to be part of a ruling coalition government in Germany.