Exclusive: Afghans should be 'sent back at the border,' says AfD lead candidate Tino Chrupalla

Interview with Tino Chrupalla, lead candidate of the AfD

One of the two lead candidates for the right-wing populist Alternative for Germany (AfD) party, Tino Chrupalla, says he opposes offering asylum to the vast majority of Afghans.

Chrupalla complained that of the first 4,000 people who had been flown out by the German military from Kabul airport during the recent multinational airlift, only 136 counted as what he would consider to be local support staff in Afghanistan.

Asked to clarify how he would define the term local support staff, Chrupalla said: "They are for example interpreters who worked for the German military." When asked if only Bundeswehr staff, he said he did not want "NGOs or anything else diluting the term. Otherwise, it can't be verified. Who can say for sure which people are truly local staff?"

Given one last scenario of someone working for a German foundation in Afghanistan, he said: "You'd have to look at what they did exactly. If they just brought eggs or milk in the morning, then I wouldn't count that as actual support."

On 'floodgates' and border security

An Afghan who had managed to reach Pakistan in recent weeks submitted a question to Chrupalla, asking if Germany planned to offer help for people fleeing his homeland more generally in a manner reminiscent of 2015.

Chrupalla said that his party was "in line" with the governments of Austria and Denmark, which had said they planned not to take refugees from Afghanistan.

The German government currently estimates that around 40,000 people still in Afghanistan would qualify for evacuation either as local support staff or as their relatives. Chrupalla disputed this calculation from the government as inflated.

"This opens a floodgate. We don't want that. Local aid is much more important," Chrupalla told DW's Manuela Küfner and Erkan Arikan. He went on to say his first priority would be sending home Afghans who had arrived in Germany in previous years but had not successfully secured asylum or residency: "There are still 30,000 Afghans in this country who do not have the right to stay here."

He also said that Afghans should be turned away at the German border "in accordance with EU law," because if they reached it under the current conditions, they would have passed through several "safe" third countries en route. EU law requires asylum seekers to apply in the first member state they set foot in.

Reminded of comments from former AfD leader Frauke Petry during the so-called migrant crisis of 2015 about using weapons at the border, Chrupalla said that in "emergency situations" such as a "violent attack," all national border forces reserved this right, saying "you must be able to defend yourself."

The right-wing AfD's tough rhetoric in the aftermath of the migrant crisis contributed to it entering the national parliament for the first time in its history in 2017 on 12.6% of the vote. Most of Germany's volatile opinion polls see the party in danger of losing some of that support this time, as it battles to be the fourth-largest party with the pro-business Free Democrats and the socialist Left party. 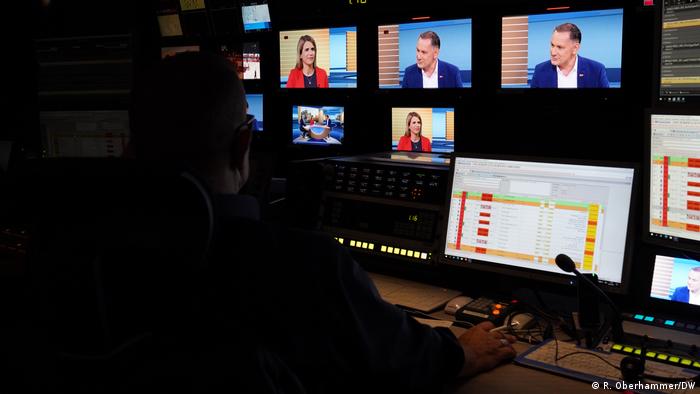 In the aftermath of major flooding in Germany and other severe adverse weather events around the globe, Chrupalla said that the AfD "does not deny climate change," but did say they were highly skeptical of UN-sponsored and other reports on the scale of mankind's contribution to it.

"That's a big difference... We don't deny... Why do we even have to use the word 'deny,?'" the 46-year-old from the eastern state of Saxony asked. "We're saying that the impact human activities have on climate change is minimal – and it is! Germany's contribution to this even more so. We don't deny climate change; it has been happening for thousands of years. We do need to think about how we can adapt to this situation and to these circumstances."

The AfD advocates withdrawing from the Paris climate accord, and extending the running times of coal and nuclear power sites in Germany, with coal currently set for a slow phase-out in Germany and the last atomic reactors soon to go offline at the end of 2022.

On 'fear,' 'hysteria' and COVID

Chrupalla described COVID-19 as "a virus that has spread throughout the world and needs to be taken seriously."

The AfD has been among the more skeptical parties where the government response to the pandemic is concerned, challenging several of the government's plans and restrictions, either in parliament or the courts, or both.

Asked whether that was really all it was, he said: "Of course. It is another virus and we will have to live with it for the coming years."

Amid a debate in Germany on whether employers should be given special exemption to ask staff if they have been vaccinated, Chrupalla said he was not in favor of this proposal. He declined to say whether he had been vaccinated, calling it a "personal decision." He also said that if he still ran the painting and decorating business he operated before diving into politics full time, he would not have asked his employees.

He said he believed climate change and COVID were two sides of the same coin, examples of a culture of "hysteria."

"Fear and panic is being pushed in all areas, with COVID, with the climate. It is like some kind of new religion, that is supposed be cultivated here, in order to take money out of taxpayer's pockets with taxes on CO2 emissions."

On (lacking) coalition options and the upcoming vote

Chrupalla became chairman of the AfD in 2019 and was named part of their two-person ticket for the chancellery in May this year.

The euroskeptic AfD has the dubious honor of being perhaps the only thing that can unite all of Germany's other political parties. On one point, all the other five major players say they're unanimous: they would not join a coalition with Chrupalla, Weidel and their colleagues.

But given the wide open polls and the likely difficulties forging a coalition this year, Chrupalla said he would wait until all the votes were counted before ruling anything out categorically. But the party's primary goal was simple, he said: "We are aiming first of all to become the strongest opposition party again. That is our target at these elections. We want to clearly state what is going wrong in this country."

Finally, Chrupalla told DW he would not miss the CDU chancellor of 16 years when she leaves her post after a new government is formed.

"I am happy that this woman is stepping down. She has done damage to Germany like almost no other [post-war] chancellor before her," he said, adding that a prominent former editor of Der Spiegel magazine and then newspaper Die Welt had also described the current government as the worst since World War II.

Interview with Tino Chrupalla, lead candidate of the AfD