Thailand protests: What′s next for the stalled pro-democracy movement? | Asia | An in-depth look at news from across the continent | DW | 24.03.2021

Thailand protests: What's next for the stalled pro-democracy movement?

Bids to reinvigorate Thailand's pro-democracy movement have been hampered by the pandemic and arrests of key protest leaders. DW spoke to some demonstrators about the movement's future and what it means for Thailand. 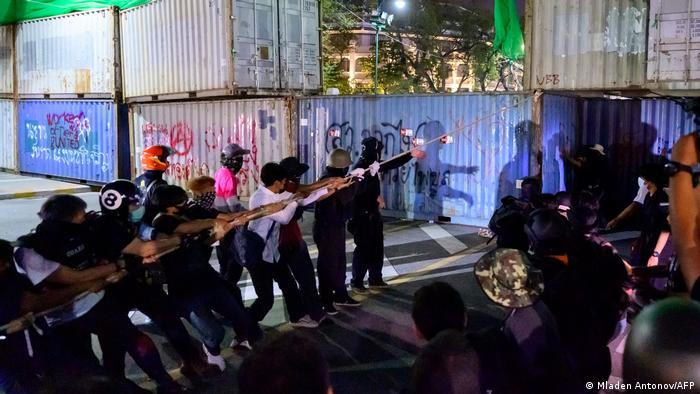 Protesters pull down a shipping container set up to block access to the nearby Grand Palace on March 20, 2021

"The movement is lacking a clear direction. The government has been pressuring protesters by falsely accusing them [of defaming the monarchy]. There are barely any speeches these days. Perhaps because the leaders were arrested," 29-year-old Pattha (name changed), a state-owned enterprise employee, told DW.

The youth-led pro-democracy movement that rocked Thailand throughout 2020 lost momentum when the country was struck by a COVID-19 outbreak at the end of the year and was further suppressed by the arrests of key protest leaders.

Prime Minister Prayuth Chan-ocha, one of the movement's principal targets, has retaliated against the mass rallies by rounding up its prominent figures.

Key pro-democracy activists were charged with royal defamation and sedition in February and have been denied bail. With the movement's leaders languishing in jail, the campaign has been derailed.

The government has also employed increasingly tough measures to disperse the demonstrations. The most recent protest, on March 20, ended with riot police using water cannon and rubber bullets against the crowd. At least 11 people were injured and five were arrested.

Demonstrators have called on Prayuth to resign, as well as for reforms to the constitution and the powerful monarchy.

DW spoke to several protesters to understand how they perceive the current political climate. Most of their names have been changed to protect their identities. Below are some excerpts from the interviews:

DW: What do you make of the current, stalled state of the protests?

The momentum has slightly decreased compared to last year because of the pandemic. The three demands — Prayuth's resignation, constitutional amendments and royal reform — are causing friction in our society, especially with the older generations.

Varitha, 23, who last protested in October:

The movement no longer has a clear goal like it used to. Perhaps because nobody is coordinating the different pro-democracy groups. But I still try to monitor and spread the news on social media, mainly on Twitter, and I also donate money to support the movement.

DW: What did you make of the protest leaders' arrests?

Their arrests were not unexpected. I knew this would happen sooner or later. But even then, when they were actually arrested, I still felt depressed. It really shows the injustice and hopelessness of this country.

Pak, 29, a consultant who recently stopped going to the protests because she has to travel outside of Bangkok for work:

I feel sorry for them. They have sacrificed [for the cause]. They think like me but they have the courage to step up and speak up. Their arrests have greatly affected the movement because the protests lately seem to lack a goal. There's no planning. We are unable to pressure [the government]. In the end, people will get bored and stop coming out to protest.

DW: What's next for the movement and the country?

Pattha: The movement is likely to lose steam. Not much will change in the next 10 years, but it's a long battle we're fighting. If people have more knowledge, Thailand might change in 30 years, but the economy will collapse in the near future. For those aged 20-35, it's difficult to be fully financially independent. Educated people will move abroad to work.

Decha: Younger generations are still fighting for the future. We have seen injustice after injustice. Although it's difficult to reach our goal, time is on our side.

DW: How do you see your future in Thailand given the political climate?

Varitha: Those with power and money, who can easily make their voices heard, remain indifferent to the violence shown right now. But I plan to continue protesting without being discouraged, even when it will still be the same corrupt government in the future. If I start feeling tired and stop fighting, I'd have to put up with the country's repression forever. At least people will receive more information and have a broader viewpoint if we continue to fight.

Nattakarn: The only way to have a better life is to go study abroad and not come back here. I wouldn't even mind unskilled labor. I just need to get out first. But at the same time, I think to myself: "How can I be happy as if I couldn't care less about the suffering of those in jail?" But I'm powerless.

Decha: The thought of migrating to another country has crossed my mind because of how hopeless the economy and politics are here. But why do I have to leave my hometown and move to a better country? I was born here and live here. I'll stand with the demonstrators. I'll go to the protests as much as I can. I believe the wind of change is coming and I'll never give up.