A former civil servant has been convicted of 29 counts of violating Thailand's strict lese majeste law. She pleaded guilty to posting audio clips of a podcast produced by a prominent critic of the monarchy. 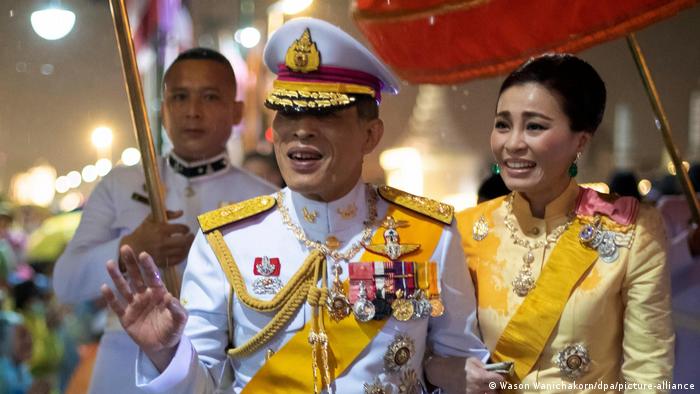 A former civil servant accused of insulting Thailand's monarchy was sentenced to a record prison term of 43 years and six months, for violating the country's strict lese majeste laws.

The Bangkok Criminal Court found the woman guilty of 29 counts of violating Thailand's strict law on insulting or defaming the monarchy, for posting audio clips to Facebook and YouTube with comments deemed critical of the monarchy, the group Thai Lawyers for Human Rights said.

The court originally announced her sentence as 87 years, but reduced it by half because she pleaded guilty to the offenses. The sentence comes as Thailand increases its use of the controversial legislation against pro-democracy protesters, and a growing wave of open criticism of the monarchy.

Anchan — whose last name was withheld by lawyers in order to protect her relatives — was first arrested in 2015 after being linked to a podcast host who was a vocal critic of the monarchy. She was then held in pre-trial detention for three years before being released on bail.

When her case was transferred to criminal court, she pleaded guilty with the hope that the court would have sympathy for her actions, because she had only shared the podcaster's audio clips, and had not posted or commented on it, she told local media on Tuesday.

"I thought it was nothing. There were so many people who shared this content and listened to it. The guy [who made the content] had done it for so many years," Anchan said. "So I didn't really think this through and was too confident and not being careful enough to realize at the time that it wasn't appropriate.''

"Today's court verdict is shocking and sends a spine-chilling signal that not only criticisms of the monarchy won't be tolerated, but they will also be severely punished," said Sunai Phasuk, a senior researcher for Human Rights Watch.

"Anchan, a 60-year-old woman, was sentenced today to 87 years in jail for sharing 29 audio clips of 'Banpot', a radio host critical of the #Monarchy… It's #inhuman. It's #Dictatorship," tweeted Emilie Pradichit, executive director of the Manushya Foundation, a Bangkok-based NGO.

The previous record for a lese majeste sentence was issued in 2017, when a military court sentenced a man to 35 years in prison for making social media posts deemed defamatory to the monarchy.

Abolishing the lese majeste law is one of the key demands of the current pro-democracy movement in the Southeast Asian country.

Since demonstrations against the Prayuth Chan-o-cha-led government started in July, over 40 activists have been charged under lese majeste laws for their participation in demonstrations, demanding reforms to both the government and monarchy – led by King Maha Vajiralongkorn.

Violating the lese majeste law — Article 112 of the constitution — is punishable by three to 15 years in prison per count.