Thai prime minister found not guilty of conflict of interest

Thai Prime Minister Prayuth Chan-ocha had been accused of conflict of interest because he continued to live in a military residence after retiring as army chief. A court has cleared him, allowing him to keep his job. 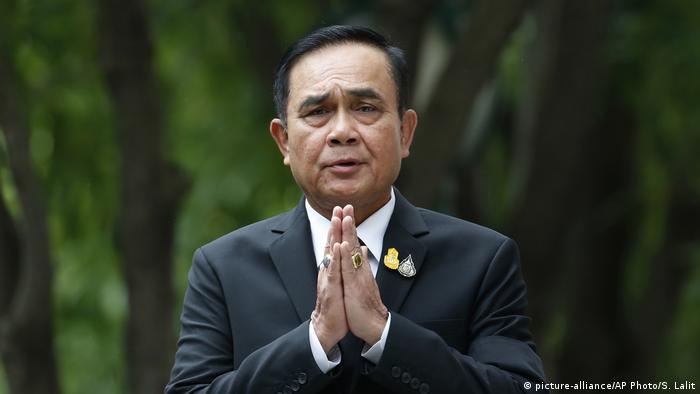 Thailand's highest court on Wednesday ruled that Prime Minister Prayuth Chan-ocha was not guilty of breaching ethics rules in the constitution, meaning he can stay in power.

The case in the Constitutional Court was filed by opposition lawmakers, who claimed Prayuth had broken the law by continuing to stay in military housing after leaving the army in 2014.

But in handing down the acquittal, the nine-judge panel said it agreed with the army's explanation that retired senior officials are entitled to stay in army housing in recognition of their service.

Prayuth, a former military commander who came to power in a 2014 coup, has also previously argued that he needs to stay at the army house for security reasons.

Thai king is a headache for Germany

The opposition's legal challenge pointed to constitutional articles on conflict of interest that prevent government ministers from receiving special benefits from state agencies or enterprises. Ministers found guilty of violating these standards can be thrown out of office.

Wednesday's court decision came after months of student-led pro-democracy protests demanding Prayuth's removal. Even before the court decision was handed down, demonstrators began to gather in Bangkok to respond to the verdict.

Besides Prayuth's resignation, the demonstrators are also calling for an overhaul of the country's army-penned constitution and reform of the monarchy.

In Thailand, the court system, like the military, is considered a pillar of the royalist establishment. Chulalongkorn University political scientist Thitinan Pongsudhirak told the AFP news agency that the judges' verdict came as little surprise.

"Anyone who's followed Thai politics for the past 15 years will think it's a foregone conclusion ... because the constitutional court has been so politicized since 2006 that it does not engender public trust," he said.

Court rulings have ousted three Thai prime ministers in the past 12 years. In each instance, the politicians were associated with former prime minister Thaksin Shinawatra, who was ousted in a 2006 coup after being accused of corruption and disrespecting the monarchy.

Thailand's king can be expelled if he rules from Germany: parliament

Thailand's King Maha Vajiralongkorn may be expelled from Germany if he issues decrees from his Bavarian villa, the Bundestag has said. The monarch's long stays in Europe have been under scrutiny amid democracy protests.