Where is Thailand's protest movement heading?

The pro-democracy protest movement shaking up politics in Thailand has been interrupted by a COVID outbreak. With public attention turned elsewhere, widespread crackdowns on protesters continue behind the scenes. 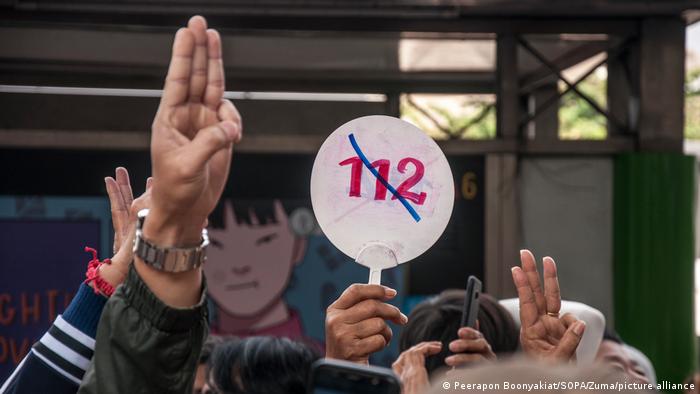 A recent resurgence of coronavirus in Bangkok has put a damper on the massive pro-democracy rallies that gripped the Thai capital at the end of 2020.

The outbreak has also forced the pro-democracy movement to put off having their three demands met. The protesters seek the resignation of Prime Minister Prayuth Chan-ocha, the rewriting of Thailand's constitution and monarchy reform.

"Most of the protesters have decided to bide their time until there is a drop in the pandemic," Paul Chambers, a political scientist at Naresuan University in northern Thailand, told DW, adding that the pandemic will only "temporarily" keep protesters off the streets.

In the absence of lager rallies, demonstrators are carrying out flash mobs and small-scale, guerilla-like protest tactics calling for changes to Thailand's lese majeste law, known as Article 112. In Thailand, criticizing or insulting the monarchy can entail a lengthy prison sentence.

Protesters have hung banners calling for a repeal of the law in Bangkok shopping malls and from pedestrian bridges. They also hoisted a red flag with the number "112" at a police station.

While the protests have remained largely peaceful, Bangkok police chief Suwat Jangyodsuk recently warned that his officers would "use force if necessary" to stamp out these new tactics.

Flash mobs in Bangkok on January 16 were met by a harsh police response, followed by "immediate arrests and even abductions of demonstrators," according to Chambers, adding that the crackdowns, which have included lengthy prison sentences on lese majeste charges, are designed to "intimidate demonstrators into silent acquiescence." 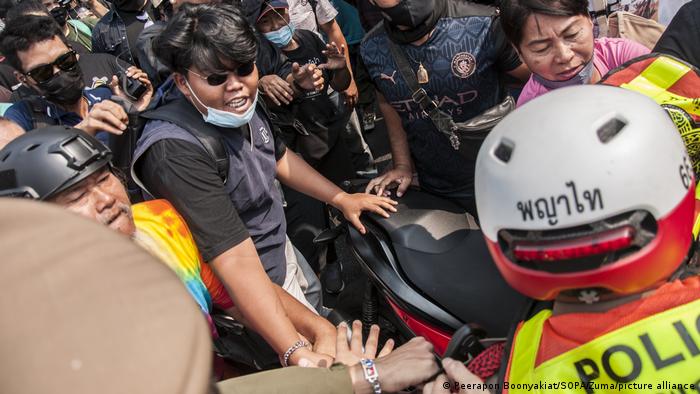 A pro-democracy flash mob clashes with police in Bangkok

"The regime has unwisely tried to take advantage of the suspension of protests to increase repression," Buchanan told DW, adding that this tactic is likely to motivate demonstrators.

"If the protests were indeed running out of steam, this is likely to make things start boiling again," he said.

In November, Prime Minister Prayuth threatened to apply the full force of the law against demonstrators.

Since then, at least 55 people have been charged with insulting the monarchy, according to the Thai legal watchdog iLaw.

"The regime is clearly trying to send a strong signal that the dissent towards the monarchy we saw in 2020 has gone far enough and will no longer be tolerated," said Buchanan, adding that applying the lese majeste laws is a double-edged sword for Thailand's establishment, as it may cause more people to support reforming the role of the monarchy.

"That's why it was suspended for a few years. So, reaching for it now is a sign of desperation. It shows that the regime has run out of ideas on how to handle the monarchy's legitimacy crisis," Buchanan added.

Chambers, who researches civil-military relations, said that the application of lese majeste laws could "have the unintended effect of making Thailand an international pariah state and turn more Thai people against the government and even the current monarch."

Last Tuesday, a 63-year old Thai woman was sentenced to 43 years and six months for posting audio clips deemed critical of the monarchy — a record prison term for lese majeste.

Anchan Preelert, a former civil servant, was convicted of 29 counts of violating Article 112. The initial sentence of 87 years — three years for each of the charges — was halved because she had pleaded guilty.

Preelert was first arrested in 2015, and has been imprisoned for nearly four years while the trial was held. Chambers said that the timing of her sentence was politically motivated to "cause the utmost intimidation of progressive demonstrators."

Buchanan agreed that it was "certainly not a coincidence that the law has suddenly been revived and we've seen the harshest sentence ever handed down at this time."

"It's clearly a threat and a warning to others, as the regime attempts to shield the monarchy and stifle the protests," he said.

While the coronavirus is currently keeping protesters off the streets, it is possible that 2021 could see a repeat of last year's pattern, in which protests were sporadic at first, but then occurred almost daily.

Last year's demonstrations, initially triggered by the disbandment of the Future Forward Party in February, were interrupted by the first phase of the pandemic but resumed five months later once COVID-19 restrictions were relaxed.

"It's only January and the political temperature in Thailand is already starting to rise. I expect the contentious politics we saw in 2020 to continue throughout 2021, and the monarchy and the lese majeste law will be at the very center of it," Buchanan said.

He also pointed out that an initial year-end break to the protests was announced shortly before the latest COVID outbreak.

The intention was for the students "to focus on final exams, which is a very poignant reminder of just how young these protesters are, and that they have lives and aspirations outside of their activism," he added.

The pro-democracy movement has addressed speculation that the campaign is losing steam, saying in a recent Facebook posts: "Our movement is not dying down or fading as many would have you believe."

"Prayuth and his cohorts have not resigned, the constitution is still not written by the people, and the monarchy is still above the constitution. Our movement will continue. Get ready for a big show."