Activists are trying to reinvigorate the pro-democracy movement after a break due to the pandemic. Protesters risk being prosecuted under a draconian royal defamation law. 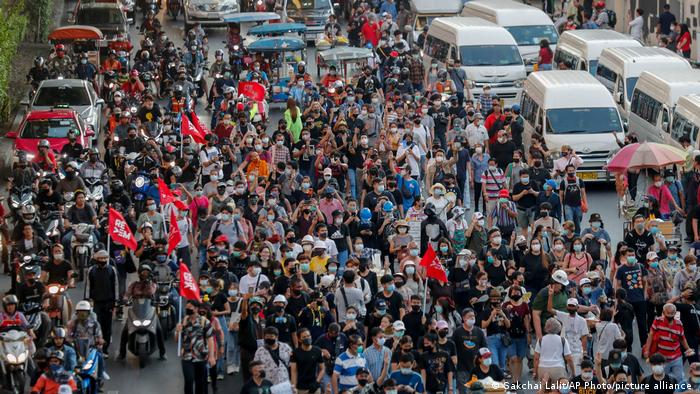 Hundreds of protesters marched in the Thai capital of Bangkok on Saturday to draw attention to a draconian royal defamation law and the plight of their detained leaders.

The protest was largely peaceful and was organized by a coalition of several protest groups. The groups are calling for the resignation of Prime Minister Prayuth Chan-ocha and his government, the constitution to be made more democratic, and for the monarchy to be made more accountable.

Critics of the regime have been effectively silenced by a lese majeste law that shields the kingdom's powerful King Maha Vajiralongkorn and the royal family from defamation, with prison sentences of up to 15 years per charge.

Protesters on Saturday marched to Bangkok's criminal court, where some protesters piled up garbage and set it on fire beneath a portrait of the king. Others wielded posters of prominent activists currently locked up under the lese majeste law.

They chanted the names of human rights lawyer Anon Numpa and student leader Parit Chiwarak, and called for the release of former civil servant Anchan, who was jailed in January for more than 43 years for insulting the monarchy.

More than 3,000 police were stationed ahead of the protest — one of several across the city. Several dozen protesters were reportedly arrested.

The pro-democracy movement has lost momentum since it took a break in December and January due to the pandemic, but attempts to reinvigorate the cause have been hampered by the arrest of protest leaders.

At least 382 people, including 13 children, have been charged over the protests since July 2020, according to Thai Lawyers for Human Rights.