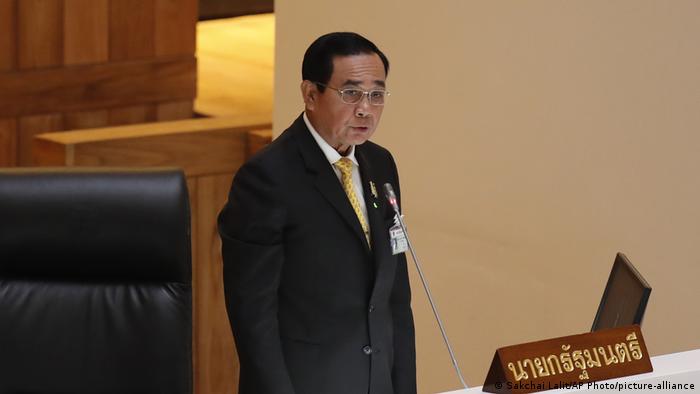 Thai Prime Minister Prayuth Chan-ocha survived a no-confidence vote in parliament on Saturday as protesters called for demonstrations against his government.

Prayuth faced accusations of mismanaging the coronavirus pandemic and human rights violations in his second no-confidence vote since he took office in 2019.

After four days of debates, Prayuth and nine ministers survived with 272 votes, while 206 lawmakers voted against him and three abstained.

Thailand's parliament is comprised of 487 legislators, with 277 ruling coalition and 210 opposition members.

Over 1,000 protesters eventually gathered at the gates of the parliament, with protest leaders calling for a peaceful demonstration.

"We want a peaceful protest," protest leader and pro-democracy activist Panusaya "Rung" Sithijirawattanakul told the media after meeting with police, adding "there is no reason for police to break up this demonstration."

Journalist May Wong said on Twitter that police expected to deploy some 4,000 police officers during the protests.

Dozens of protesters gathered outside the parliament on Friday evening to hold a mock censure motion against the prime minister and his cabinet.

Opposition politicians and protesters have accused the prime minister of using the monarchy as a shield from criticism against his cabinet, referring to a law that prohibits criticism of the king.

"The biggest fault of Prayuth is that he does not understand the principles of the constitutional monarchy," said Pita Limjaroenrat, leader of the opposition Move Forward Party.

"He used the monarchy to protect himself whenever he was criticized or opposed. This is an evil action, making him no longer qualified to be prime minister," he said.

Article 112 in Thailand's criminal code, known as the lese majeste law, allows authorities to prosecute opposition members if they criticize the monarchy.

he criticized the government for its slow COVID-19 vaccine rollout and alleged favoritism in signing deals.

Criticizing vaccine rollout in Thailand relates to the monarchy. Most of the shots that Thailand ordered were produced by a private company owned by the king, Siam Bioscience.

The pro-democracy movement has long protested the lese majeste law and continues to call for its reform.