Thai monarchy - a hindrance to democracy?

In his birthday speech, Thailand's deeply revered king called on his people to maintain unity after the recent anti-government protests. But the monarchy, too, has played a part in the current political unrest. 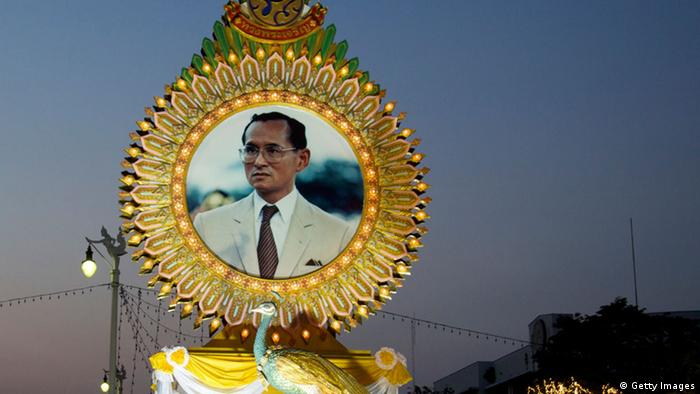 During his traditional birthday address to the nation, Thai monarch Bhumibol Adulyadej asked his fellow countrymen to work together for the stability of the nation. On the occasion of his 86th Birthday, the monarch said: "Our country has long experienced happiness because we have been united in performing our duties and working together for the good of the whole country."

The king did not comment directly on the protests, which escalated over the weekend. With his speech he fulfilled his important role as a unifying figure in Thai society, as he is respected by all sides. His words carry weight and have the power to unite the country.

But at the same time, the royal house and the 86-year old monarch are also part of the problem. "The protests of the past few days are just a struggle for dominance of the country's political system after the succession to the throne," says an expert who declined to be identified in the media citing lèse-majesté law, which forbids any critical speech against the king, his family or the monarchy. Violators of the law face imprisonment in Thailand.

Human rights organizations have been criticizing this statute for many years. Since its introduction in 1908, it has been repeatedly used to silence political opponents. According to Brad Adams, Asia director of Human Rights Watch, the courts seem to have increasingly become the main protectors of the monarchy. "It comes at the expense of freedom of expression," Adams told DW, referring to the condemnation of Thai activist Somyot Pruksakaemsuk in January 2013. 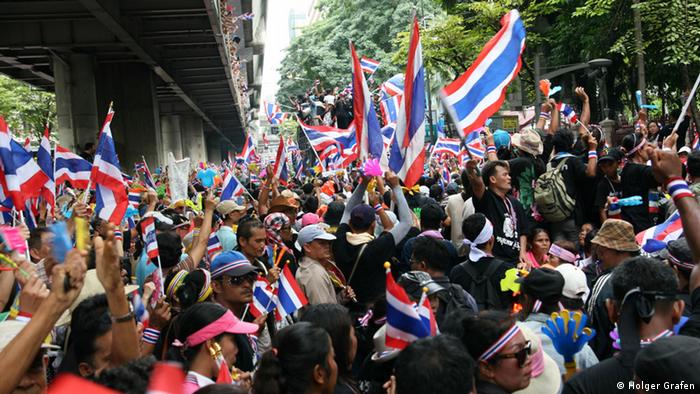 The demonsrators want to topple the government

The anti-defamation law is only the visible expression of a much more deep-rooted problem: the sweeping powers of the monarchy beyond the reach of any controls.

Officially, Thailand has been a constitutional monarchy since 1932, a form of government that limits the powers of a ruler through a constitution. In Thailand, however, the limitations on royal powers are not very transparent, according to Jost Pachaly from the Heinrich-Boll-Foundation in Bangkok.

"The monarchy plays an important role behind the scenes. But the role is difficult to assess because nothing is reported about it and no one really knows anything specific," he said.

The diffuse powers of the monarchy contribute to the ongoing power struggles inside the country. Asia expert, Marco Bünte, of the German Institute of Global and Area Studies (GIGA), described Thailand's history as a "vicious circle of military coups, constitutions, crises and renewed military coups." The monarchy's involvement was considerable, he added.

When the current king ascended the throne in 1946, the monarchy was in a shambles, as explained by Paul M. Handley in his royal biography "The King Never Smiles." In the years that followed, however, the king and other members of the royal family won back control.

Thailand: a society in upheaval

Violent protests have engulfed Thailand. The opposition is calling for the elected government to step down. But, the protests go against the will of the majority, which wants the government to remain in power. (03.12.2013)

Thai officials have allowed opposition protesters through barricades outside the government and metropolitan police headquarters. Officials have said the move was made to avoid futher violence and confrontation. (03.12.2013)

All legal means to topple the government have been exhausted in Thailand's power struggle. 'Will the middle class back the escalation of violence?' Southeast Asia expert Marc Saxer asks. (28.11.2013)

Only when the scenes of brotherhood that followed the street clashes in Bangkok lead to far-reaching social changes will Thailand be able to become a stable democracy, says DW's Rodion Ebbighausen. (03.12.2013)

"Bhumibol's ability to regain power and respect for the monarchy was no accident, but rather the fruit of a tireless, decisive and sometimes unscrupulous effort by the persevering prince."

The king's powers rest, above all, on his moral integrity and reputation. The image of a god-like Buddhist king - a Dharma Raja - was created with the help of enormous financial and propagandistic resources. Many Thais, even today, still view the king in this light. The trick, Handley noted, is "to exercise power without having any political power."

In Thailand, this ordinarily occurs through the secret Privy Council consisting of former members of the government and military who still maintain intimate ties to the corridors of power. Decisions by the council are made in secret and therefore circumvent any kind of democratic control.

In other words, according to Handley, the country has developed over the years into a sort of Buddhist-theocratic society under the motto "nation, religion and king."

In addition to the king's charisma and prestige on which his extensive powers rest, there is also his wealth, which could damage his Buddha-like image, despite the fact that it does not belong to him, but rather to the domain of the Crown Property Bureau (CPB). The CPB is a completely independent institution and is not part of the palace administration, the state, or a private company. It not only administers the real estate of the royal family but also owns shares in the country's largest corporations. And it pays no taxes. It is difficult to judge just how wealthy Thailand's monarchy is, but Forbes magazine estimates that it spends more than 370 million euros annually ($495 million). 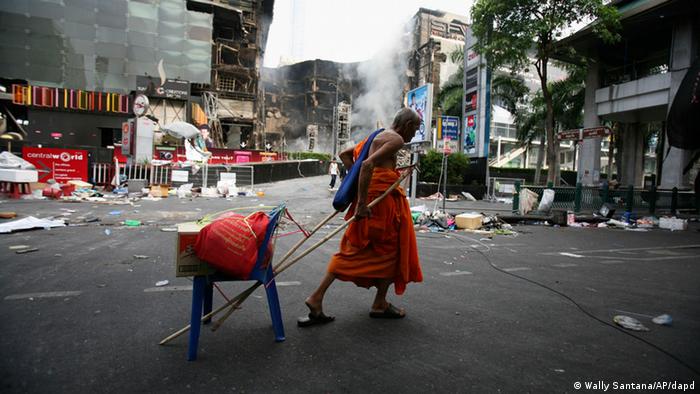 More than 100 people died during the 2010 protests

The political and economic clout of the royal family is a problem because no one is allowed to report on it due to the anti-defamation law," Pachaly said.

It also makes the democratic decision-making process difficult as the key factors remain opaque and not open to public scrutiny. Furthermore, the lèse-majesté law is used as a tool to imprison political opponents in an increasingly polarized country. The mere allegation that someone has insulted the king is sufficient in some cases to end a political career.

Although a national reconciliation process has been initiated, after a wave of protests which erupted in 2010, not much has been achieved. Pachaly says "Everyone talks about the reconciliation process, but there is no progress, because the two main groups remain stuck in their positions, waiting for the other side to give in."

The recent turmoil is a proof of this and the old age of the king aggravates the situation even further. The supporters of the current government intend to expand their influence over the monarchy during the transition from the present king to his successor, a scary thought for the royal family and the old elites, says the unnamed source. "The royal palace is naturally afraid of republican ideas."

Thai King Maha Vajiralongkorn is under fresh scrutiny for questions over whether he paid the correct property and inheritance taxes.

The pro-democracy protest movement shaking up politics in Thailand has been interrupted by a COVID outbreak. With public attention turned elsewhere, widespread crackdowns on protesters continue behind the scenes.