Three pro-democracy figures have been charged with violating royal defamation laws over a rally in Bangkok last year. They were also charged with sedition, along with 15 other protesters. 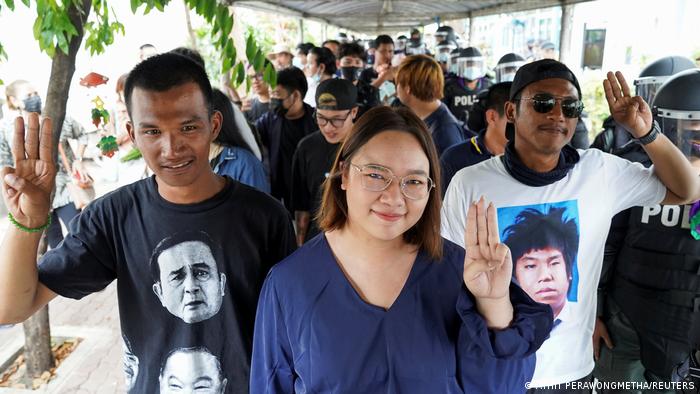 The activists are facing charges of insulting the monarchy

A court in Thailand has denied bail to three pro-democracy activists who have been charged with insulting the monarchy.

Jatupat posted on Facebook on Monday afternoon that he, Panusaya and Panupong had been remanded in custody.

"Fight on everyone," he wrote.

They were also charged with sedition along with 15 other pro-democracy protesters. The court released the other activists on bail for 350,000 Thai baht ($11,350/€9,570). The sedition charges carry a penalty of up to seven years in prison.

The Thai government is currently trying to quell growing dissatisfaction with the royal family.

Corruption and the lese-majeste law in Thailand

Thailand's youth movement has posed the biggest challenge so far to Prime Minister and former coup leader Prayuth Chan-ocha, who protesters say designed the rules of the 2019 election to keep himself in power. Prayuth's government has denied any wrongdoing.

Protesters also say the constitution gives Thai king Maha Vajiralongkorn too much power and have called upon the monarch to renounce his royal fortune.

In January, a former civil servant was sentenced to a record prison term of 43 years and six months, for violating the country's lese-majeste law — Thailand's strict legislation on insulting or defaming the monarchy.

Criticizing the monarchy is a serious crime in Thailand. But a popular chatroom app is giving reform-minded Thais a forum to discuss politically sensitive topics.

With Thailand's king currently in his favorite foreign retreat — and with his return date uncertain — protesters pushing for royal reforms turned to Germany's embassy instead of the Thai palace to deliver their message.

Thailand protests: What's next for the stalled pro-democracy movement? 24.03.2021

Bids to reinvigorate Thailand's pro-democracy movement have been hampered by the pandemic and arrests of key protest leaders. DW spoke to some demonstrators about the movement's future and what it means for Thailand.

At least 23 activists have been charged with insulting the monarchy as authorities attempt to crack down on pro-democracy demonstrations.