Six explosions, one near a famous skyscraper, have hit Bangkok as US Secretary of State Mike Pompeo attended a regional security summit. Unconfirmed reports suggest that other devices were found across the city.

At least four people were injured on Friday when several small bombs went off in the Thai capital, Bangkok, during the morning rush hour, police said.

The explosions sounded as the city hosted a regional security meeting of foreign ministers from the Association of Southeast Asian Nations (ASEAN), along with representatives from the United States, China and Russia.

One blast hit the city's Suanluang district, a short distance from the international airport.

Suesattaya, director of the Suanluang region, said: "I received a report that they are pingpong bombs hidden in bushes by the road."

"Pingpong bombs" are called as such due to their size.

At least three other bombs detonated in the area around a government complex hosting several ministries on the northern side of the city.

Thai media reported two further blasts near a Skytrain station in the city's Silom business district, including one close to a famous downtown skyscraper. 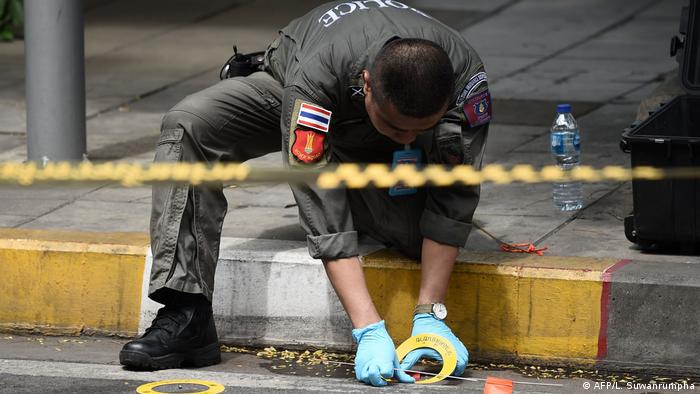 Eyewitnesses said a security guard was hurt close to the 77-story King Power Mahanakhon building. Police cordoned off nearby streets and conducted a full search of the area.

There were unconfirmed reports of several other devices being found across the city. Police said one small explosive was recovered before it blew up.

Two men were reported arrested, though it is unclear what their connection to the bombings may be.

The men were detained after wires and ball bearings were found in an inactive device outside police headquarters. Thai authorities confirmed the discovery was linked to the attacks. However, later information available to DW showed the men had no discernable connection to the attack.

Police head Jakthip Chaijinda said the men originated from the Muslim-majority region bordering Malaysia which is in the midst of a 15-year insurgency that has resulted in nearly 7,000 deaths.

However, the superintendent said it was "too early" to establish a distinct connection to the rebellion.

"I would like to condemn those causing a situation which destroys peace and damages the country's image. I have instructed officials to take care of public safety and those affected promptly," he said.

There was no immediate claim of responsibility for the blasts. Thailand has a long history of political violence linked to mass protests, coups and short-lived governments.

Bangkok was hit by a series of small bomb blasts in 2017 in opposition to Thailand's then-military junta. One man was jailed for planting a bomb that wounded 21 people at a hospital.

US Secretary of State Mike Pompeo and China's top diplomat Wang Yi are in the Thai capital on Friday to attend the regional security meeting of the Association of Southeast Asian Nations (ASEAN).

After a Chinese ban, a rise in plastic trash exports to Malaysia, Vietnam, Thailand, Indonesia and Philippines causes a political stink. (04.07.2019)

The US-China trade dispute is high on the ASEAN summit agenda. The bloc's leaders are set to sign an economic partnership deal at their annual meeting in Bangkok, but not all countries want Beijing's economic hegemony. (22.06.2019)

During filming for a reality TV show, the actress pried open two giant clams that are protected under Thai law. The show's producers have apologized but she could now face a 5-year jail sentence. (06.07.2019)