Thailand: Growing COVID crisis heats up political tension | Asia | An in-depth look at news from across the continent | DW | 11.08.2021

Thailand is experiencing its worst COVID surge since the pandemic began, which has increased discontent with the government and reinvigorated an ongoing protest movement. 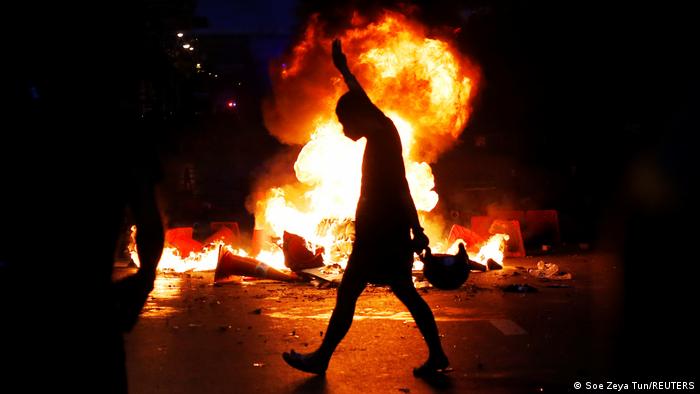 As Thailand continues to battle its most severe wave of COVID infections yet, frustration is mounting over the government's poor handling of a Delta variant-fueled surge, a sluggish vaccine rollout and the heavy toll that the pandemic restrictions are having on the battered economy.

High-risk areas including the capital Bangkok and its surrounding provinces have been in lockdown since mid-July, while hospitals have been overwhelmed by the number of patients.

"Their management is not effective. Lockdown measures are imposed and people are told to stay at home but the government is not doing enough to alleviate the financial burdens," said Pattha, a flight attendant with a major airline in Thailand who asked to use a pseudonym.

The public health emergency has sparked a backlash against Prime Minister Prayuth Chan-ocha, with protesters taking to the streets in recent weeks to again demand his resignation.

The protesters are calling for funds to be redirected from the army's and monarchy's large budgets to Thailand's flagging COVID response. "Since he can't do his job, Prayuth should just quit before things get worse than they already are," said 31-year-old Pattha, whose husband is a frontline health worker at a public hospital.

Last week, Prayuth insisted that he would neither answer the increasing calls for him to step down, nor dissolve parliament, as the coronavirus surge pushes new cases and deaths to record highs nearly every day.

Thailand has recorded a total of 756,505 cases and 6,204 deaths. More than 95% of the cases and deaths have been reported during the surge that began in early April.

Strict measures introduced to rein in the virus are dampening hopes of economic recovery in Thailand.

The Finance Ministry last Thursday slashed its 2021 economic growth forecast for the third time to 1.3% from 2.3%.

Workers in the informal economy are bearing most of the burden, suffering the highest number of job losses.

"The third wave has hit us much harder than the previous two. Our income has decreased by 60% but since the beginning of this month, it has ground to zero," Taveesak Puttisawet, a 57-year-old motorcycle taxi driver, told DW.

Puttisawet is currently required to sit in home quarantine for 14 days after his wife and son tested positive for coronavirus. While his wife is being medically treated, his son is sitting out the illness at home, as the hospital where he got tested has run out of bed space.

"We just bought a new motorcycle because the old one broke down. I haven't figured out how we're going to pay the installment at the end of the month," said Taveesak, who has continued to take odd jobs to provide for his family throughout the pandemic.

In 2019, more than half of Thailand's workforce of 37.6 million was in the informal sector, according to the National Statistical Office. This means they are not covered under social security schemes.

Public disaffection with the Prayuth regime is aggravating hesitancy about the Sinovac COVID vaccine.

Many Thais say they do not trust the effectiveness of the vaccines procured by the government.

As someone with an underlying health issue, Sunitsa (name changed) is skeptical of the Sinovac formula. Her parents haven't been vaccinated against coronavirus either.

"We wouldn't know which vaccine we'd actually be getting until we actually got there [to get the jab]. That's why we never registered in the first place," she said.

All three family members caught COVID, and were recently discharged from hospitals.

Rising cases despite vaccinations have raised concerns over the efficacy of the Chinese-made vaccines, which has driven demand for mRNA shots.

Sunitsa was able to secure doses of Moderna's vaccine — which cost 1,650 baht per shot — for her family last month when a batch became available. She is one of the lucky few to get an order in, as they sell out within minutes.

Thailand began its mass vaccination drive in June, with the aim of vaccinating 50 million people by the end of the year.

However, only 6.1% of Thailand's population of nearly 70 million are fully inoculated, with 21.8% receiving at least one dose.

Sinovac makes up 50% of the vaccine mix, followed by AstraZeneca at 45% and Sinopharm at 5%, according to Thai Health Ministry data.

Despite initially being the only country in Southeast Asia to opt out, health authorities have turned around and begun the process of joining the COVAX scheme that donates vaccines to developing nations.