Tesla had its worst day of trading since 2016 after Elon Musk took a puff of marijuana on a podcast and his chief accountant quit. The incident came as Musk faces intense scrutiny for a series of incidents. 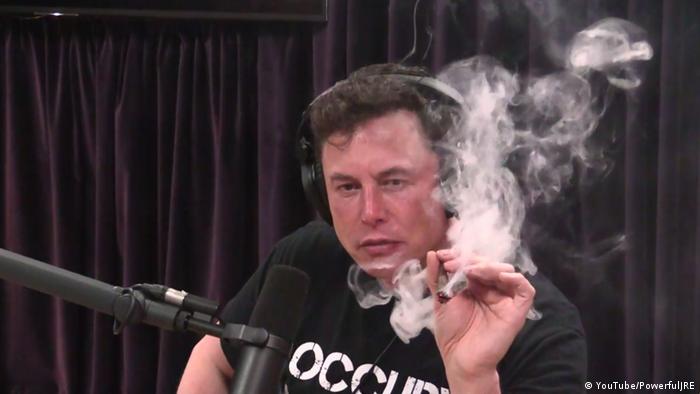 Shares in Tesla dropped 10 percent in a single day of trading on Friday after CEO Elon Musk took one puff of marijuana on a live podcast, followed by his chief accounting officer resigning within weeks of taking the job.

The outspoken billionaire was on a live stream with comedian Joe Rogan when he was offered a cigar-like mix of tobacco and cannabis known as a blunt on Thursday night.

He took one on-screen puff from the blunt during the two-and-a-half hour show. The show was filmed in California where recreational marijuana is legal, according to state laws. He does appear to inhale.

However, Musk attracted criticism for the incident, as he is already under close scrutiny for potential stock manipulation, is facing legal action from a prominent short seller, and potential defamation action for calling a cave rescuer a "child rapist.”

"We have been calling for a Co-CEO or COO to assist to codifying the leadership structure and in so doing, the culture at Tesla," said James Albertine, an analyst at brokerage Consumer Edge, intensifying recent investor calls for a senior leadership appointee.

"We think this is further evidence that the time is now for management and the board to address these issues."

When Rogan offered the blunt he said, "You probably can't because of stockholders right?" Musk responded by pointing out it was legal in California, but also said that he very rarely partook.

"As a result, this caused me to reconsider my future. I want to be clear that I believe strongly in Tesla, its mission, and its future prospects, and I have no disagreements with Tesla's leadership or its financial reporting."

Bloomberg also reported that Tesla's Chief People Officer Gaby Toledano would be stepping down after about a year in the job.

Early in Friday trading, Tesla shares had dipped by roughly 10 percent to around $252 (€217), their biggest single-day drop in two years. The stock later rallied and recouped much of its losses. As recently as early August, a Tesla share fetched almost $380.

The Tesla boss has abruptly pulled the plug on taking the electric-car maker private. The stunning turnaround may not be enough to ward off US regulators and pacify angry investors. (27.08.2018)