Canada's Senate has passed a landmark law, known as the Cannabis Act, legalizing recreational marijuana use. Canadians will have to wait until September at the earliest, however, before they can buy the drug legally. 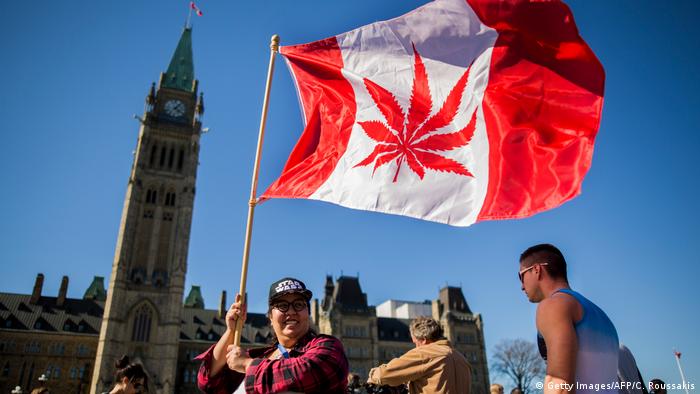 The Canadian Senate on Tuesday gave the final passage to the Cannabis Act, a landmark bill legalizing the purchase and consumption of marijuana.

The bill passed its final hurdle in a 52-29 Senate vote. It is expected to come into force within eight to 12 weeks.

How will Canada's cannabis market work?

Under the Cannabis Act, or Bill C-45, Canadian adults will be able to:

'Good for kids, bad for criminals'

Canadian Prime Minister Justin Trudeau, who pledged to push for legalization during his 2015 election campaign, tweeted minutes after the vote: "It's been too easy for our kids to get marijuana — and for criminals to reap the profits. Today, we change that. Our plan to legalize and regulate marijuana just passed the Senate."

"We've just witnessed a historic vote for Canada," Senator Tony Dean, who sponsored the Senate bill, told broadcaster CBC. "The end of 90 years of prohibition. Transformative social policy, I think. A brave move on the part of the government."

Provinces given some leeway: Although the law applies nationwide, individual provinces will be allowed to make a handful of their own rules. For example, certain states have indicated they intend to set the legal age at 19. The standard legal age is 18. Quebec, Manitoba and Nunavut have also said they want to prohibit marijuana cultivation at home.

Following in Uruguay's footsteps: Tuesday's passage of Bill C-45 makes Canada only the world's second country to introduce a nationwide marijuana market, after Uruguay fully legalized the drug last year. The US has seen nine states legalize recreational cannabis use, while another 29 states allow medicinal use. However, Washington has so far refrained from introducing a nationwide legalization law.

Legalization by September: Trudeau's government had initially said it hoped to legalize cannabis by July 1. That deadline was pushed back, however, after the Senate requested more time to review the bill. The delay also gives each province eight to 12 weeks to prepare for the upcoming retail sales. Nevertheless, the bill is expected to receive royal assent in order to formally become law by as early as Wednesday.

Prof. Markus Leweke is a medical doctor at the Central Institute of Mental Health in Mannheim, Germany, he's conducting research on pharmacological treatments for neuropsychiatric disorders, with a focus on cannabinoids. (05.11.2015)

Not all dangerous drugs are banned - and not all banned drugs are more dangerous than legal ones. Here, an overview of legal and illegal narcotics, and what they actually do to those who consume them. (19.05.2015)