Germany's medicinal cannabis market has grown rapidly since legalization in 2017. But as demand increases, importers and producers are grappling with a shortage in supply and many patients are forced to pay a premium. When Christoph Schäkermann was diagnosed with multiple sclerosis (MS) in early 2015, it came as a shock. "I was full of despair, I was angry," he said. Sitting in a cafe in Dusseldorf and talking about his illness, Schäkermann does not look like he is chronically ill. But he certainly is. He's been forced to quit his job and his plans to emigrate to Uruguay are indefinitely on hold.

MS attacks occur suddenly. Symptoms can include feeling hot, sweating, suffering from epileptic seizures affecting arms and legs, and vision trouble. Stress, in particular, can trigger these attacks. A simple train ride can become an ordeal for Schäkermann. After consulting a range of different doctors and numerous hospital stays, Schäkermann discovered a neurologist who specializes in MS. They immediately discussed possible therapies and their respective side effects, including the use of marijuana, or dried cannabis buds. "It was an odd feeling getting asked by my doctor if I preferred five or 10 grams of cannabis," Schäkermann said.

Schäkermann received his first prescription for medicinal cannabis in August 2017. But when he arrived at the pharmacy to collect it, he was told the drug would only become available again in October. Schäkermann couldn't believe it and shook his head as he recalled that day. "Some might not see is this way, but this is medicine," he said. 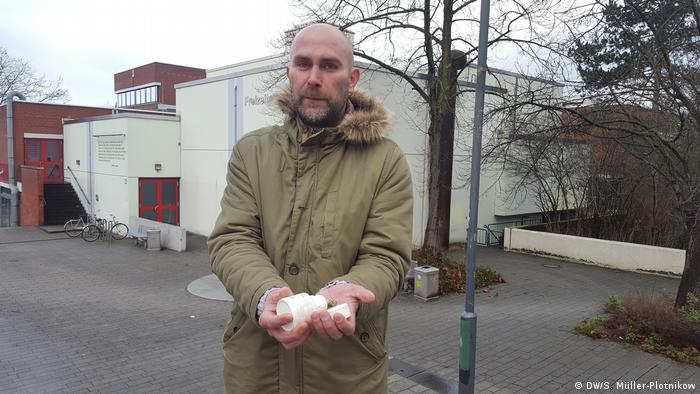 Schäkermann, who suffers from MS, says that medicinal cannabis significantly improves his quality of life

The limited availability of medicinal cannabis and the refusal of his health insurer to pick up the costs have made life difficult for Schäkermann, who lives on welfare. "Consuming cannabis allows me to go about my regular day and makes the pain and seizures bearable," he said. "Cannabis makes me feel much better when I'm in pain or have trouble moving my body. And then I can deal much better with the remaining pain."

There was a long, heated debate in Germany over whether cannabis should be allowed for medicinal purposes before it was legalized in March 2017. Those suffering from severe illnesses can purchase it in pharmacies without needing a special license. Studies have shown cannabis to help with nausea, alleviate pain for the severely ill, and to stimulate the appetite of cancer and HIV/AIDS patients.

Doctors may only prescribe medicinal cannabis to severely ill patients if they can demonstrate that other therapies are not promising. THC, the active ingredient in cannabis, can be prescribed as dried cannabis buds. In the past, many patients had to pay for the cannabis themselves and health insurers only occasionally covered the costs. With Germany's new law in place, insurers are now obliged to foot the bill for cannabis therapies. Presently, health insurers reject one out of three requests for this treatment, according to a survey conducted by German daily Rheinische Post among the country's biggest health insurers. Christoph Schäkermann is one of these unlucky patients. It means he faces huge costs. The pharmacy charges €125 ($150) for five grams of dried cannabis buds. 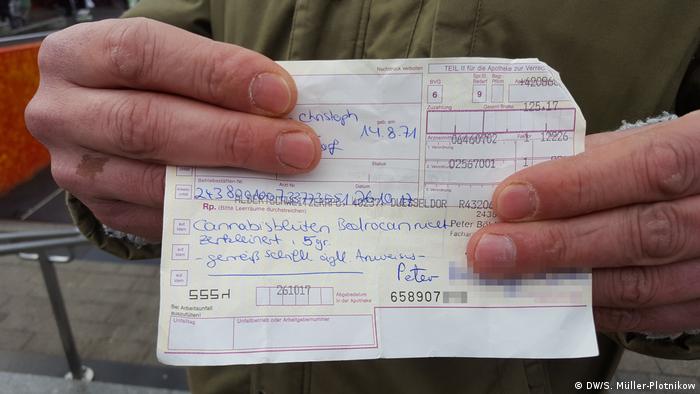 Despite obtaining a perscription, Schäkermann and other patients sometimes wait months for medicinal cannabis

Since medicinal cannabis was legalized in Germany, the market has grown tremendously. In the first half of 2017 alone, doctors prescribed more than 10,600 units of dried cannabis buds, according to the Federal Union of German Associations of Pharmacists (ABDA). The number has been rising rapidly. In March 2017, 560 units were prescribed and this figure continuously rose over time to almost 5,000 prescriptions in June. And these numbers only pertain to medicinal cannabis paid for by health insurers. Pharmacies also sold 12,500 so-called finished medicinal products based on cannabis ingredients to patients who paid themselves. No wonder, then, that cannabis supplies ran low during the summer.

David Henn and Niklas Kouparanis were quick to capitalize on this burgeoning cannabis market. In November 2016, two months before Germany passed the medical cannabis law, Henn founded Cannamedical Pharma. It is one of four companies that have received permission by Germany's Federal Opium Agency to import medicinal cannabis and supply it throughout the country. Cannamedical began as a tiny office in downtown Cologne but has quickly expanded and will soon work together with the world's largest cannabis producer.

The sudden increase in demand for medicinal cannabis poses a major challenge for importers and producers. Cannamedical has vowed to ensure patients have access to the highest quality medicinal cannabis. "The supply shortage was a serious issue not only for us but also for patients depending on this medicine," explained Kouparanis, who works as Cannamedical's sales manager. "At the moment, we have only one cannabis producer in all of Europe, located in the Netherlands. This producer has to meet the entire European demand for medicinal cannabis, which is almost impossible." 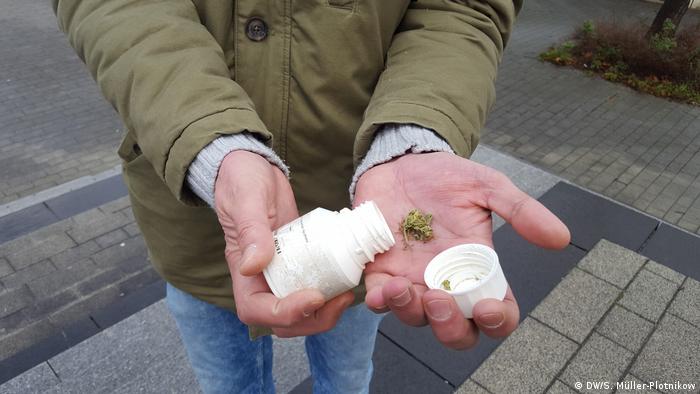 In hindsight, Kouparanis thinks the demand for medicinal cannabis in Germany was hugely underestimated. The early months were also complicated by financial issues. "We had to pay huge sums upfront for orders placed with the Dutch Office of Medical Cannabis," he said.

Cannamedical is planning to significantly expand its business in 2018. "We have found a partner who has guaranteed to supply us over the long run," Kouparanis said. "This partnership allows us to meet the entire demand for medicinal cannabis in Germany." Cannamedical still needs Germany's Federal Opium Agency to sanction the new cannabis producer and supplier.

Cannamedical plans to important cannabis from a Canadian producer. In Canada, as in the United States and Israel, the medicinal cannabis market has exploded. Along with the Netherlands, it is the main supplier of cannabis to Germany. Cannamedical is expecting huge growth and estimates some 30,000 severely ill patients will require medicinal cannabis in 2018. Of these, 10,000 are registered with public health insurers. And an internal survey has indicated that some 20,000 privately insured patients consume medicinal cannabis.

"On top of that, there are patients who pay for the medicine out of their own pocket," Kouparanis explained — an additional estimated 30,000 individuals. Kouparanis projects his company will import about 22 tons of cannabis throughout this year to meet the demand of those 30,000 patients alone. Their cannabis warehouse is in an undisclosed location "somewhere in the middle of Germany." 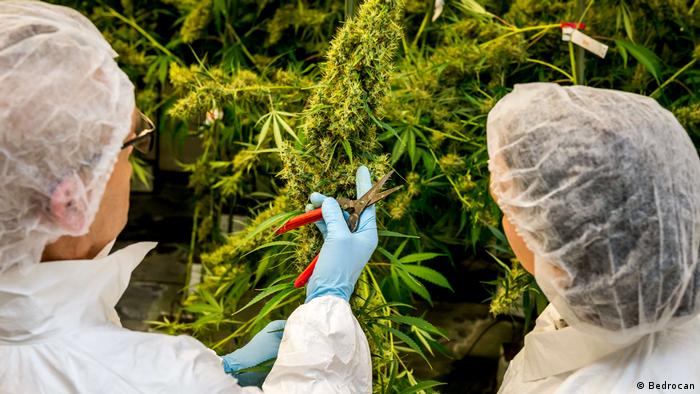 In places like Canada and the US, the production of medical cannabas has skyrocketed — is Germany next?

The German market is highly regulated. And that extends to what Cannamedical is permitted to tell the media. In this inchoate industry, caution and respectability are key. Stereotypes about people abusing medicinal cannabis for recreational drug use, paid for by health insurers, are still widespread. Likewise, some fear that importing cannabis will fuel the illicit drug trade, and thus increase the perceived risk of addiction.

Kouparanis argues that society has not yet grasped that different standards are applied to medicinal cannabis. "The kind of cannabis medicine we import has to meet extremely high quality standards and has nothing in common with coffee shop weed," he said.

His company would like to grow cannabis in Germany — a potentially lucrative business. This, in turn, is regulated by the cannabis department of Germany's Federal Opium Agency. Securing a tender to produce cannabis is somewhat of a catch-22, however. The Federal Opium Agency only licenses producers that have grown medicinal cannabis, which is illegal in Germany, in the past.