A London schoolgirl has opened a charity card to find a disturbing message from foreign prisoners claiming forced labor for Britain's largest retailer. Tesco says it is "shocked" by the allegations. 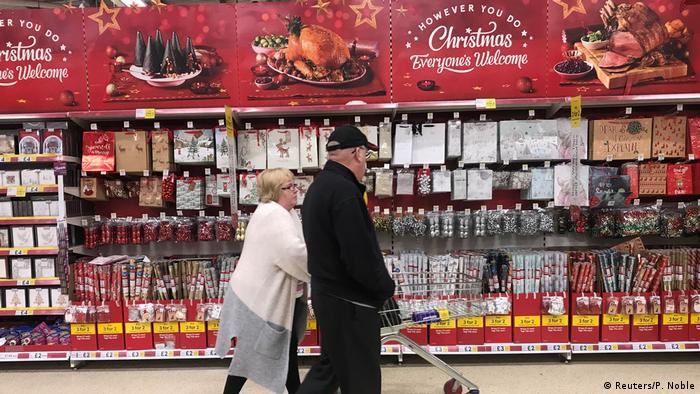 Tesco announced Sunday it has halted production at a factory in China after one of its charity Christmas cards was discovered with a cry for help from people who said they were inmates at Shanghai's Qingpu Prison.

Britain's The Sunday Times newspaper said that 6-year-old Florence Widdicombe opened the Christmas card featuring a kitten in a Santa hat last week and found the message inside.

"We are foreign prisoners in Shanghai Qingpu Prison China ... Forced to work against our will. Please help us and notify human rights organisation," it read.

In response, a Tesco spokesperson said Sunday it abhors the use of prison labor and "would never allow it in our supply chain."

"We were shocked by these allegations and immediately suspended the factory where these cards are produced and launched an investigation. We have also withdrawn these cards from sale whilst we investigate."

Tesco is also the world's third-largest supermarket chain and has a number of global operations including China, India and Ireland.

Tesco said it had 35 full-time sourcing managers across Asia who visited the factories on-site to ensure safe working conditions.

The card was produced at Zheijiang Yunguang Printing in the east of the country. The spokesperson said that an independent audit was conducted in November this year and that "no evidence was found to suggest they had broken our rule banning the use of prison labor." She added that no other complaints had been received.

"If evidence is found, we will permanently de-list the supplier."

At the bottom, the note said: "Use the link to contact Mr Peter Humphrey."

Humphrey is a former British journalist and corporate fraud investigator who had spent nine months in Qingpu.

The girl's father contacted Humphrey via the social network platform LinkedIn, and Humphrey proceeded to contact several other former prisoners, who confirmed that foreign inmates had been packing cards for Tesco.

Humphrey and his American wife, Yu Yingzeng, ran an investigative firm hired by the pharmaceutical company GlaxoSmithKline, which faced a bribery probe in China.

The pair were charged in 2013 for illegally obtaining private information from people, then convicted in 2014 and deported the following year.

Writing in The Sunday Times, Humphrey said he did not know the identities or the nationalities of the people who wrote the card, but he "had no doubt they are Qingpu prisoners who knew me before my release in June 2015 from the suburban prison where I spent 23 months."

Charity cards are popular in the United Kingdom around Christmas time and are often sold at very low cost.