Bangladesh′s textile industry works towards becoming more eco-friendly | Asia | An in-depth look at news from across the continent | DW | 25.10.2019

The world's second-largest garment exporter, Bangladesh, is trying to introduce greener alternatives in textile production. The attempt could help the country secure its position in the international market. More than 100 garment factories in Bangladesh have recently received the "green building" certificate from the United States Green Building Council (USGBC), an NGO that assesses environmental issues of commercial and residential settlements.

Around 500 more manufacturers are waiting for their certificates, according to Bangladesh Garment Manufacturers and Exporters Association (BGMEA). These efforts to make the industry more eco-friendly are expected to secure Bangladesh's apparel and textile exports a competitive place in the global market.

What makes a factory building green?

Therefore, in order to be declared eco-friendly, a building must contribute to nine different aspects that encourage sustainability. These are location and transportation, sustainable sites, water efficiency, energy and atmosphere, materials and resources, indoor environment quality and innovation in design.

Based on how companies rate in these aspects, the USGBC awards a "green building" certificate in four categories, including platinum, followed by gold and silver, and a basic category known as "certified."

Depending on size of a factory, establishing green infrastructure requires 20 to 25% percent additional investment compared to a traditional garment building, according to Bangladesh's garment exporter association.

Additionally, the demand for eco-friendly fashion is also getting bigger and although "green investments" do not produce immediate returns, there is a need to meet this demand, Faisal Samad, a senior official at the garment exporter association told DW.

The dark side of fashion 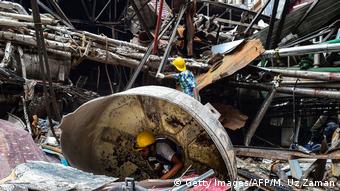 Recently, an explosion at a textile factory near Dhaka killed 10 people

Factories in Bangladesh are notorious for their low level of safety and poor rights for workers. In 2013, a multi-storied garment manufacturing unit at Rana Plaza in Dhaka collapsed,killing over 1,000 workers. A year before, 112 people died in a factory fire near the capital, Dhaka.

The incidents generated huge international attention, together with the demand for immediate action to ensure safety standards in the country's apparel sector.

Plummy Fashions' Fazlul Hoq is aware of the close scrutiny Bangladesh's factories are subjected to and believes that an additional "green" certificate may help the country's factories become more competitive in the global market.

Abdul Matin, General Secretary of Bangladesh Paribesh Andolon (Bangladesh Environment Movement) feels that the introduction of green buildings in the garment industry would definitely contribute to climate protection, but factory owners need to treat effluents effectively as well. He urges textile entrepreneurs to set up waste treatment plants in every factory to reduce pollution.