Tentative Europe reaches out to Trump′s America | Europe | News and current affairs from around the continent | DW | 09.11.2016

He is not the president the European Union would have elected. Now, just like the pro-Hillary Clinton voters in the US, Europeans have to get used to President Donald Trump. 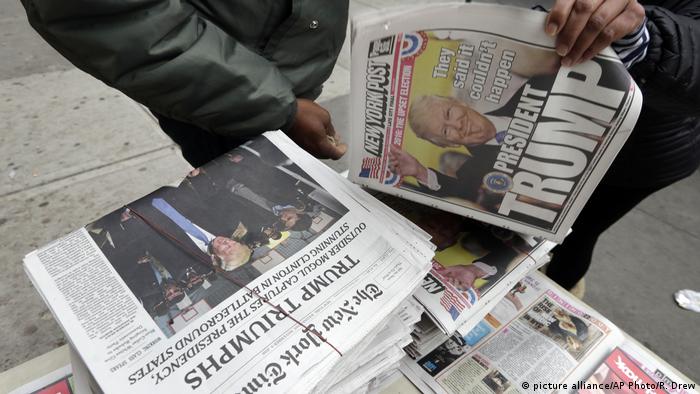 On the wall over EU Commission Vice President Federica Mogherini's right shoulder is a huge framed poster of President Barack Obama, with the design that reads "HOPE" in capital letters. Mogherini said it dates from Obama's first presidential campaign, when he declared that "in America, anything is possible."

The EU's foreign policy chief candidly noted that today, that phrase can be taken two ways.

As a candidate, Donald Trump was often dismissive of the EU, saying, for example, that Britain would be better off after Brexit than as a member.

With him as leader of the EU's closest partner, Mogherini is clearly focusing on the "hope" message. "It is still very unclear to us what will be the course of the foreign policy of the new administration," she said. "We will wait and see what comes on that side but from our side it will be important to continue to work together."

"We also know as Europeans that sometimes what you do and what you say in an electoral campaign is different than what you do as a president," she added, "and we will have to see what happens from January 21st."

Similar points came up over at NATO headquarters, where Secretary General Jens Stoltenberg and visiting dignitaries were also fielding election questions. Stoltenberg said he looks forward to speaking soon to president-elect Trump and he front-loaded messages to the man who had threatened to check bank accounts before deploying collective defense and who has a perceived affinity for Russian President Vladimir Putin, NATO's nemesis.

"The US commitment to NATO and the US commitment to the collective defense of Europe has been rock solid for almost 70 years," Stoltenberg said, "and I’m absolutely confident that, that will still be the case and that the US will be committed to the defense of Europe and to the NATO obligations and our security guarantees." He reminded for good measure that the only time Article 5 has ever been used was to protect the US after 9/11 and that thousands of soldiers from allied countries have fought in the US-led war in Afghanistan that followed.

Standing alongside Stoltenberg, Finnish President Sauli Niinisto also chose the "hope" theme, noting that in Trump's acceptance speech he already sounded different than candidate Trump.  "He was very constructive and surely we hope that he will continue on that way with regard to Europe, to the European Union and surely to NATO," he said. "I will trust that the US keeps its word, not only to NATO, but also otherwise to the international community."

Asked whether Trump's ascendancy would change Finland's calculation about staying outside NATO, Niinisto turned the question around and suggested that instead the Trump win should prompt EU countries to "wake up to take more responsibility for their own security."

Belgian Foreign Minister Didier Reynders, watching the end unfold at the US mission to Belgium, echoed that thought. "It's maybe a shock in Europe to see such an election," Reynders said, adding that many of the things Trump said during the campaign had alarmed him, particularly the protectionism. He said he'd felt the same way during the Brexit campaign and is worried there will be the same "evolutions" in other European countries. 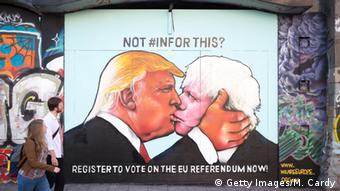 US Ambassador to NATO Doug Lute, a veteran of both the military and multiple presidential administrations, had been trying since early morning to dampen concern. "If there's one common theme for NATO, it's that we adapt over time," he said. "We're in the process of an adaptation right now because a new security setting." Lute pointed out that there are Dutch, French and German elections pending.  "When you assemble 28 democracies," Lute explained, "elections and political shifts are nearly a constant phenomenon. [NATO] has been doing this for 67 years. We're going to be fine."

Gregg Svingen, spokesman for Democrats Abroad, wasn't feeling so fine as the results were announced. Svingen had been up all night watching returns come in and he was visibly shaken but determined to move on. Svingen said he hoped Trump would quickly switch out of campaign mode too. "Talking the talk of politics is one thing but walking the walk of leadership and stable and sane governance is an entirely different thing," he worried. "Obviously the majority of Americans who voted for Donald Trump will be able to check what they bought on the inside of the box that they were sold."

Roberta Bonazzi was also watching events with concern. She works on counter-radicalization efforts with the European Foundation for Democracy, an organization that has many Muslim partners, among the groups stigmatized in the Republican Trump's campaign.  "We don't know where America is going to go and what we've seen in the campaign is not inspiring," she said. "I worry about the characterization of individuals, of groups, of cultures, of countries in a very populistic way. That doesn't help anybody."

Pauline Massart is with the think tank Friends of Europe as well as a leader in "Women in International Security". She was pulling for Clinton and more generally, for social improvements for women in a new administration. Massart had a litany of fears based on Trump pledges: "No raise of the minimum wage will affect women, especially single mothers more. Obamacare will probably be undone in the first 100 days, again affecting women disproportionately. Contraception may be more difficult to come by and will certainly no longer be covered by insurance companies; Roe v Wade may be overturned if the Supreme Court is all-out Republican, which will likely also have an effect on 'pro-women' legislation at state level too."

Former Spanish Foreign Minister Ana Palacio said the overnight ride had made her dizzy but determined to come out of the experience having learned a thing or two. She emphasized that the double shocks of Brexit and Trump had made some things clear: that polls can't be trusted in popular elections and that leaders need to examine their failed attempts to connect with their publics. "We should be humble and understand that we cannot just dismiss this as irrational," Palacio said, urging deep reflection and a new approach to both governance and communication.

Mogherini was determined to take on even potentially awkward situations with humor. Asked whether she'll be uncomfortable meeting President Trump after his infamous remarks about women, the foreign policy chief gave a wry laugh. "I'm Italian," she joked. "I've heard it all."

Opinion: Europe is staring into the abyss

The unthinkable has happened: Donald Trump will be the next president of the United States. Europe will experience great uncertainty and witness the end of an era, writes DW's Barbara Wesel. (09.11.2016)

Big bowl of wrong: What good are polls and pollsters when they get you all wrong?

First Brexit. Now the US Presidential election. What will the "global network of pollsters" get wrong next? The far-right in Europe: Le Pen in France or AfD in Germany? What if they do? Does it ever matter? (09.11.2016)