Opinion: Europe is staring into the abyss

The unthinkable has happened: Donald Trump will be the next president of the United States. Europe will experience great uncertainty and witness the end of an era, writes DW's Barbara Wesel. 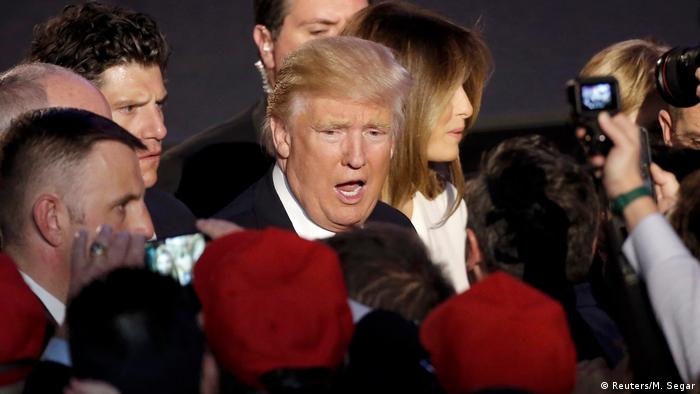 We don't exactly know what to expect from President-elect Donald Trump, but after his election campaign, it's safe to assume that most if it will be bad. Much of what he proposed - in all of its inconsistency - is going to harm European interests.

He questions NATO, admires Russian President Vladimir Putin, discriminates against immigrants, wants to tear up trade deals - the list of horrors is endless. We don't know, of course, which of these campaign statements he will act on, which of his untutored political impulses he will follow. But the uncertainty is shattering. And it is also extremely dangerous.

The popularity of US presidents has always waxed and waned, but never has one struck fear into the heart of his allies like Donald Trump. To paraphrase former US Defense Secretary Donald Rumsfeld: He is the known unknown, about whose probable course nothing is really known.

This election result feels like the end of an era. An era in which the transatlantic relationship, with all its strengths and weaknesses, was the main stabilizing factor in world politics. If Trump gives in to his isolationist impulses, global trade will be in peril. The security partnership that has protected the West for decades may be broken up. And if he cozies up to Putin, the global balance of power will shift.

The rise of Donald Trump may also herald the end of liberal democracy as we know it. He could act as a catalyst for the further rise of extreme populist movements in Europe. And if you add President Recep Tayyip Erdogan in Turkey, Putin's ongoing reign, North Korea going rogue and violent newcomer Rodrigo Duterte, the global political landscape looks completely frightening.

Even if the worst political consequences can be avoided, the culture shock caused by this election campaign runs deep. This is the end of the American dream, the myth of the country of Bob Dylan and Susan Sonntag, of Robert Redford and all our liberal heroes. They have been buried under the nasty and banal rhetoric of Donald Trump, who has basked in breaking every taboo with his sexism, racism, lies and general vitriol. This is the point where we say goodbye to the America we used to know and love.

The world has become a more dangerous and more unpredictable place. Donald Trump has the potential to turn into the stuff of our worst nightmares - and there is little evidence to suggest we might be spared the worst.