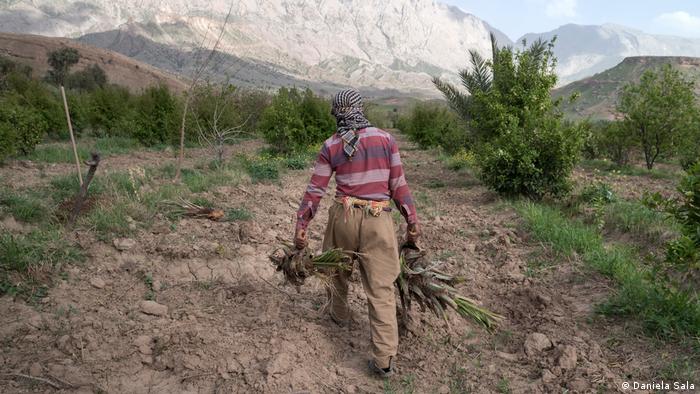 Agriculture suffers from drought in the Kurdistan Region of Iraq

Alqod Mahmoud stands on the bank of the Diyala River, staring helplessly into the stagnant pond where deep waters once swelled. Diyala means "shouting river" in Kurdish. But, these days, it's barely a whisper.

The rainy season in the autonomous Kurdistan Region of Iraq (KRI) usually lasts less than three months of the year. But, in Mahmoud's village of Topkhana, which depends on the Diyala to water its crops, locals say the situation has never been as bad as this year.

Three years ago, Mahmoud, who, at 33 years old, is Topkhana's mukhtar, or village leader, invested $1,700 in a new pump to bring water from the Diyala to irrigate his fields. Now, the pipe hangs uselessly over a bed of dry gravel. What remains of the river runs too far from the village, and too low, to water its fields.

Climate change, driving rising temperatures and irregular rainfall in the region, is a factor. But Mahmoud points the blame squarely at a more tangible culprit. "This is Iran," he said. "They built a new dam to cut the water and keep it for themselves." 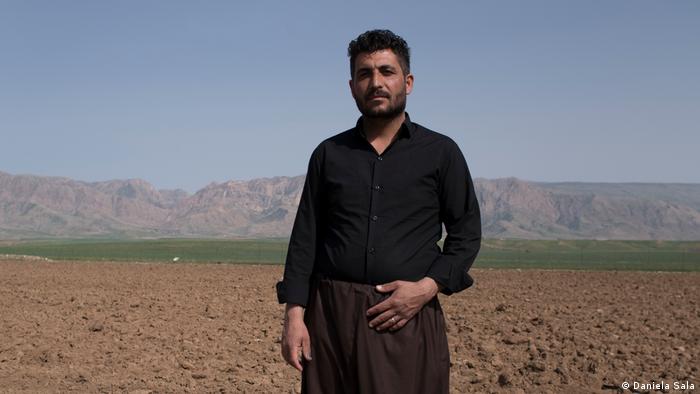 Iraq is highly dependent on water resources originating beyond its borders. Like the Diyala, which begins in Zagros mountains in eastern Iran — where it is called the Sirvan — and runs along the border between the two countries before crossing into Iraq to join the Tigris in Baghdad.

But 28 kilometers (17 miles) upstream from Topkhana, inside Iranian territory, the 169-meter (555-foot) Daryan Dam cuts the river's flow. It is the largest dam in an even larger national project. Iran's ongoing Tropical Water Project includes 14 dams with a capacity of 1.9 billion cubic meters, as well as 150 kilometers of underground tunnels diverting waterways to rural areas in southern Iran.

Drought has been displacing farmers and fuelling unrest in Iran for years. In late July, the Iranian authorities reportedly fired on protests sparked by water shortages in the southwest region of Khuzestan, where temperatures topped 50 degrees Celsius (122 degrees Fahrenheit).

"Unless Iran harnesses its water resources, the country will hit a major crisis by 2036 and will face mass migration," said Banafsheh Keynoush, a fellow at the International Institute for Iranian Studies and former consultant to the World Bank. As far as the Iranian authorities are concerned, "Iraq's interests are irrelevant," she adds bluntly.

The Daryan Dam was officially inaugurated in 2018 but sources in Iraqi Kurdistan say they began to feel the impact in 2020 and it has been more intense since the end of the last rainy season this spring. 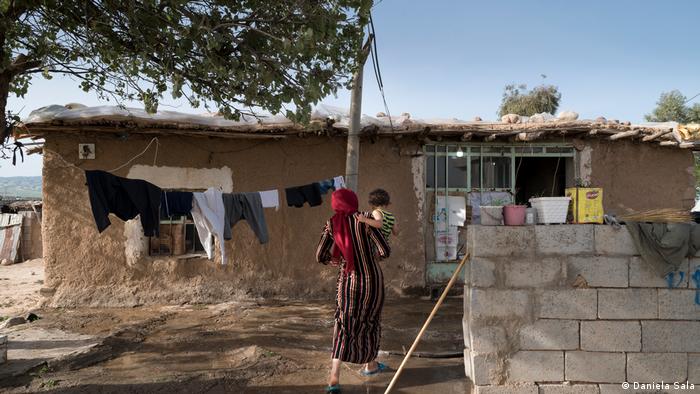 Residents of Topkhana are under pressure from the lack of water

Mahmoud says he's not sure how long the people of Topkhana will be able to hang on. "In one or two years we will have no choice but to leave," he said despondently. "We will be displaced to the city and work like slaves for some company or try to survive as street vendors."

They are not the only ones feeling the pinch. Around 30 kilometers upstream from Topkhana, the Darbandikhan dam is a key source of drinking and irrigation water in the Diyala basin area. But this year, the reservoir is dangerously low.

Namiq Mustafa, deputy director of the hydrology and meteorology department at the Darbandikhan dam, drops a ream of data and stats onto his desk. "Normally in March, after three months of rain, the average inflow in the dam would be 400 to 500 cubic meters of water per second," he said. "This year it was barely 28." 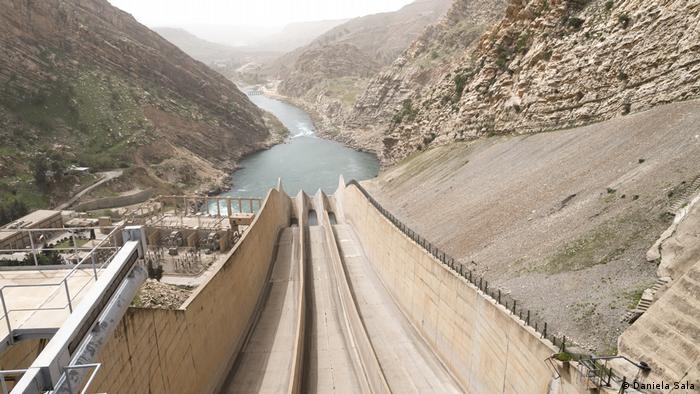 Local officials say the Darbandikhan dam in KRI was down to 28 cubic meters of water in March, compared to a usual volume for that time of year of 400 cubic meters or more

And knock-on effects are being felt throughout the economy, as farmers are forced to abandon water-intensive crops.

Soon after daybreak, long before the sun reaches its blazing zenith, crowds gather in a market square on the edge of Kalar, a city of 250,000 on the Diyala River south of Topkhana. Traders holler into megaphones to advertise fresh fruit, vegetables and fish. What they don't shout out loud is where their goods are from.

Privately, they report that crop failures in Iraq mean they are now importing much of their produce from across the border. "A fish from Iran," says one stallholder, is half the price. "Same for vegetables — for us, it has become much cheaper to import goods than produce them ourselves." 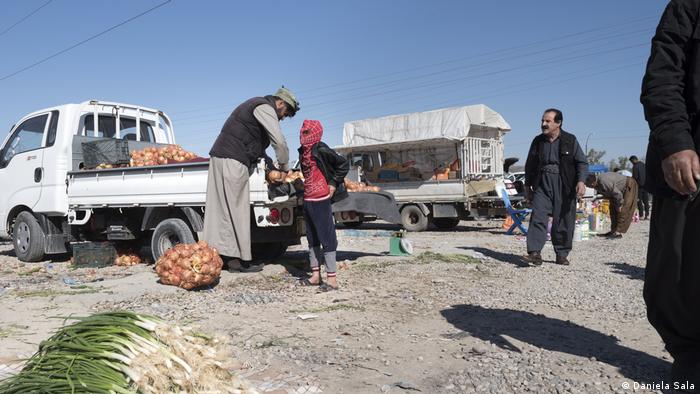 In Kalar city center, traders tell much the same story. Jabar Abdallah Mawlud, 56, sits outside his shop dressed in the gray jacket and wide trousers typical of Kurdish men. "I had a farm in Qoratu, just by the river,'' he said. "We used to grow rice, tomatoes, okra, watermelons, and I used to sell them here. Now it's all gone. All the goods you see here I had to import from Iran."

According to Iranian authorities quoted in local media, since 2016, Iraq has been the destination for 35% of Iran's agricultural exports. Abdulmutalib Raafat Sarhat, a lecturer on water management resources at Garmian University in Kalar, believes the dams therefore serve more than just Iran's water needs: "As Iran's economy struggles due to US sanctions, they are trying to solve the problem by turning Iraq into its marketplace."

Whichever way you look at it, water security is a deeply political issue, and as climate change increases the risk of drought, one country's adaptation strategy risks becoming another's crisis. The only applicable international legal framework — the UN Watercourses Convention — is vague and largely unenforced. Iraq ratified the convention in 2001. But Iran never adopted it, and Turkey, a major player in the area, voted against it.

In June this year, the Water Peace and Security tool, said it "predicts emerging and ongoing conflict throughout much of northern, central, and southern Iraq over the next 12 months," as a result of water shortages.

In summer 2018, some 118,000 people were hospitalized in Basra with symptoms related to poor water quality, driving citizens to storm the local health authority.

Activist Ali Alkharki, who took part in the protests that shook Baghdad in October 2019, says water shortages lurk often behind public outrage against corruption and economic hardship. "When I train young activists in Iraq, I always like to take them by surprise by saying that protests in Baghdad and Basra are caused by water," Alkharki said.

"It is a chain," he explained. "If we do not have enough water, we lose agricultural land, farmers, drivers, sellers, will lose their jobs ... You have poverty and insecurity. That's how you end up with people protesting in the street."

Last year, Alkharki fled the Iraqi capital for Sulaymaniyah in the KRI, where he works with the Save The Tigris campaign. "You can call us environmental activists," he said, "but actually, ours is humanitarian work — it's the future of the current and the next generation that is at stake."

With no power over what Iran does across the border, one strategy the Kurdish Regional Government (KRG) can employ is, ironically, to build more dams.

Since 2014, 245 dams have been proposed in Iraqi Kurdistan. Akram Ahmed Rasul, general director of the Directorate for Dams and Water Reservoirs of the KRI, says 14 have already been completed, 17 are under construction and another 40 are in the planning stages. 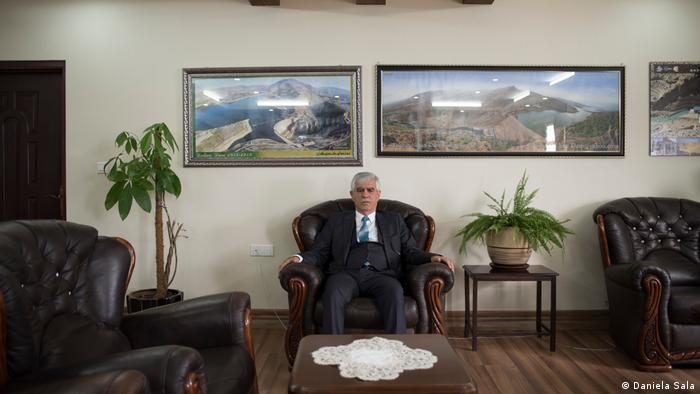 Akram Ahmed Rasul, Director-General of the Directorate of Dams and Water Reservoirs of the KRG believes that more dams are the solution to Iraqi Kurdistan's water woes

Rasul insists the dams would be opened whenever Baghdad requested. But many fear the KRG would simply be hoarding water at the expense of the rest of Iraq, and could use its control of the dams as political leverage in disputes with Baghdad.

Alkharki laughs bitterly that dams have become the go-to solution for water shortages, even in locations so far downstream there isn't enough water for them to be viable, "even in the south," he says, "in Basra, where it would be just impossible to build them. The truth is that you cannot fight dams by doing the same."

Northeastern Syria is experiencing its worst drought in nearly 70 years, with rising temperatures and erratic weather exacerbated by tensions with Turkey.

Flash floods in the southern province of Fars have killed at least 20 people and left several missing, according to state media. Forecasters have warned that more heavy rains are on the way, risking further floods.

From the Euphrates to the Mekong, dams that ensure one country's water supply risk leaving others parched. But shared water resources can be a source of peace as well as conflict.

Somalia pushes with offensive against al-Shabab despite attack