The "Fridays for Future" protests have reinvigorated the debate on climate change around the world. An exhibition in Tel Aviv now shows how cities can use innovative technologies to limit the effects of global warming. 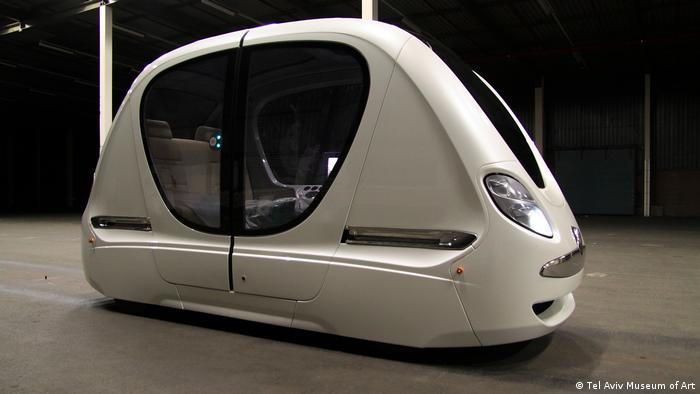 The future of transport: These "Personal Rapid Transit" pods are taking over Masdar City in Abu Dhabi

Just a few days ago, the sizzling winds of the "sharav" desert storm swept across Tel Aviv, resulting in record temperatures throughout Israel of up to 50 degrees Celsius (120 Fahrenheit). With its air conditioning working on overtime, the Tel Aviv Museum of Art provides some convenient relief from the heat, where the latest exhibition "Solar Guerrilla: Constructive Responses to Climate Change" focuses exactly on what's happening outside: changing weather patterns and global warming.

Upon entrance, the first thing you see is a wall covered in strips of colorful lines. This is not just any art installation: These lines meticulously document how the climate has actually changed around the world since the mid-19th century. Blue lines begin to turn orange and eventually reach dark red hues, referring not only to the climate in Israel but in other parts of the world as well.

The average annual temperature of Germany, for example, shifted from 6.6 degrees Celsius (44 Fahrenheit) to 10.3 (50.5 Fahrenheit) during that period, according to the installation. The data used for this visualization comes from the World Meteorological Organization (WMO). However, the exhibition primarily hopes to highlight solutions to climate change and not just document its dangers. 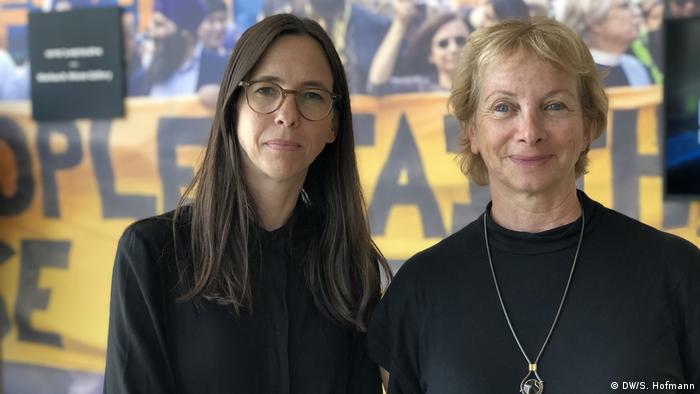 The colorful graphics of this installation are juxtaposed with another work, which documents climate change with layers of rock formations highlighting that over millions of years, the global climate has indeed repeatedly been subject to variation and change — but never over the span of a few decades, as is the case now.

Climate expert Orli Ronen from Tel Aviv University, who joined the museum team as a consultant on the "Solar Guerrilla" exhibition, says that the show aims to convey two important messages: "One is that climate change is real, and has drastic consequences. And it's man-made. The other message is that we can still do something about it. We can no longer stop climate change but there are solutions to, at the very least, slow it down."

Ways to respond to global warming

The exhibition doesn't just document global warming but wants to highlight the efforts of those who are trying to prevent it. Another large collage at the entrance of the museum shows various climate activists fighting for change, featuring pictures of protesters with signs  reading "We are drowning. We are fighting" and "Rise for climate."

These are images from the "Fridays for Future" protests started by the young Swedish climate activist Greta Thunberg. The exhibition hits a nerve.

"It's true, for once we're not just curators but also somehow activists, however, in a rather subdued manner," curator Maya Vinitsky told DW. "We're trying to use this exhibition as a way to show people how they respond (to climate change). There are many possibilities. Joining street demonstration is one of many ways." 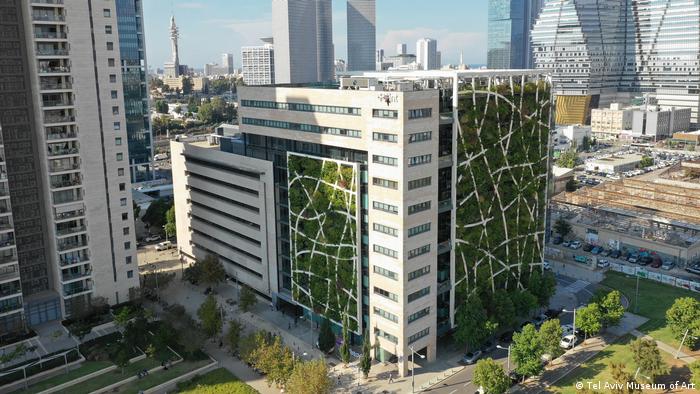 Vertical gardens to the rescue: Many cities like Singapore or Tel Aviv (picture) are trying to offset some of their carbon footprint with innovative ideas

The exhibition highlights numerous solutions to combat global warming through technology, among them a little measuring tool for energy used in your household called "Sense." The device plugs into your electric panel at home and then tells you — via app — how much electricity is being used by each device in your home. That way, you can make more educated decisions on what devices might be worth unplugging and which ones you want to keep on stand-by all the time.

Another such example is Watergen, a company that succeeded in creating a machine that turns humidity in the air into drinkable water. And there's the so-called PodCar, a little vehicle powered by a lithium phosphate battery which is recharged with solar energy.

Abu Dhabi's Masdar City in the United Arab Emirates, which prides itself as being the "city of the future" for its ambitious plans to transform into a sustainable community free of fossil fuels, has been using the little cars since 2010. Many VIPs visiting Abu Dhabi have already ridden the little pod, including leaders like Indian Prime Minister Narendra Modi and German Chancellor Angela Merkel.

The exhibition also looks at cities and municipalities that seek out innovative solutions to deal with climate change. It highlights the vertical gardens of Singapore, the rooftop tree yards of Chicago and the "Eco Wave Power" plant, which powers Tel Aviv itself by harnessing the energy of sea waves.

Among other Israeli inventions and solution, the show also presents a new neighborhood being created in the north of Tel Aviv, designed to be completely climate neutral. Here, electricity will be harnessed by solar energy and room temperature will be controlled not by electricity but using a minuscule amount of natural gas.

Architecture, design and city planning take center stage at the exhibition in general, which makes sense, as one of the main departments of the Tel Aviv Museum of Art actually focuses of architecture and design.

"Let's be honest," says climate expert Orli Ronen, "We failed as scientists. Climate change should be the main talking point anywhere, in every café. But it isn't. But I'm grateful for each and every attempt to mobilize people about climate change, and a museum is the kind of place where people are open to new ideas."

"I think it will be impossible for anyone to see this show and not want to jump into action in some way."

Green and clean: The e-bike taxi

What do urban kids, picnic lovers, animals and bees have in common? They all need nature to be happy. A learning pack about the discovery and creation of green oases in the city. (17.12.2018)

All tickets for outbound flights from French airports will include a green tax from 2020. It is expected to raise €180 million a year, which will pay for more environmentally friendly means of transportation. (09.07.2019)