'Tannhäuser' at the Bayreuth Festival Theater: A play within a play, inside and outside

What is the nature of love? The central question posed in the story line of Richard Wagner's opera "Tannhäuser" is vividly related in the new production opening this year's Bayreuth opera festival. 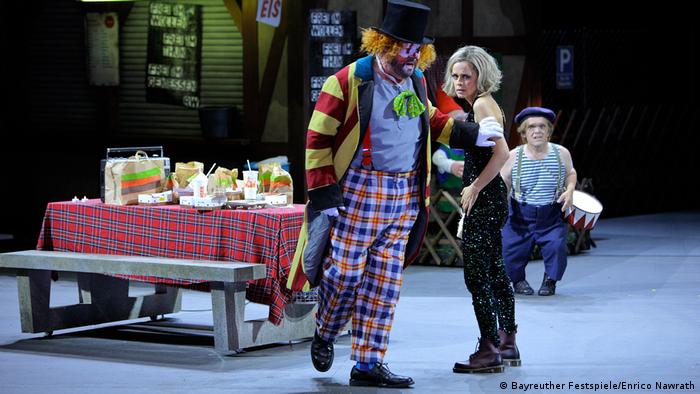 Four misfits — a clown, a vamp in a black sequined pants suit, a black drag queen and a Lilliputian — beg, borrow and steal their way through the countryside in an old truck. Discarding convention and law and order is fun until the vamp behind the wheel, Venus, fatally runs over a policeman. The clown, Tannhäuser, gets cold feet and wants to leave the mini commune.

Such is the background to Wagner's opera Tannhäuser and the Singers' Contest at Wartburg as told by German stage director Tobias Kratzer in a film sequence lasting for less than half the overture. It's only the opening volley in a fascinating and sometimes perplexing production that keeps the viewer on the edge of his seat for four hours of music — and much action. It opened the Bayreuth Festival season on July 25.

Wagner's story line: Tannhäuser, an accomplished minnesinger, has spent a seeming eternity in the sinful realm of Venus, the goddess of love. Growing tired of this, he returns to the minstrel knights at Wartburg Castle and to Elisabeth, a woman of purity and virtue. 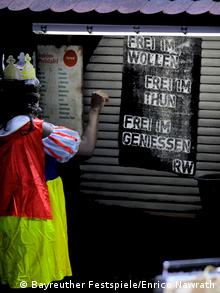 Desiring, acting and enjoying freedom: these, too, were some of Wagner's guiding principles

In a song contest there, singers examine the true nature of love, equating it with a starry sky or a pure wellspring. But tired of the hypocricy and having experienced the sensual delights of physical love, Tannhäuser reveals his past life with Venus. Ostracized from society, he seeks redemption in Rome from the pope. It is refused, but through the intercession of Elisabeth, who sacrifices her life for him, his soul is redeemed.

Modern directors often struggle with the story, its cliches and medieval moral categories. Can it have any relevance to modern life?

That it can is clear in Kratzer's production in Bayreuth. Venus is portrayed as an anarchist who distributes leaflets and glues posters to walls with the saying Frei im Wollen, frei im Thun, frei im Geniessen. It is a quote from Wagner from a phase in his life when he had sympathies with anarchism and translates as "free in your desiring, free in your actions, free in your enjoying." But Tannhäuser experiences freedom in Venus' realm as oppressive and compulsive. He leaves it behind to find himself back at the Wartburg, which on this stage set is actually shown as the Bayreuth Festspielhaus. 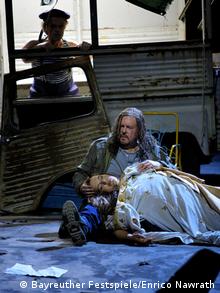 United in tragedy: Tannhäuser, Elisabeth and the silent character Oskar

There is no escaping Venus, however, not even during the intermission after Act One, when that character, portrayed by Russian soprano Elena Zhidkova, is joined by her two cohorts for an outdoor show open to the non-paying public, just down the hill from the Festspielhaus. There, the drag queen (Le Gateau Chocolat) sings while the Lilliputian Oskar (Manni Laudenbach) bangs on a tin drum.

There are more multimedia antics in Act Two, with the stage set a gigantic split screen. The bottom half depicts a real setting within a medieval church, while the upper half shows black-and-white live shots of what goes on backstage: singers waiting nervously for their entrances, stage technicians at work, choristers lining up.

There's a subcurrent of Venus to be heard in Wagner's music even when she's not to be seen. Taking that musical hint literally, the stage direction has Venus and her merry cohorts insinuating themselves into the scene and disrupting courtly society.

Act Three is set in a junkyard. After the pilgrims return from Rome without Tannhäuser, Elisabeth, in despair, has a sexual encounter with Wolfram taking her own life in her dilapidated truck. Tannhäuser does in fact return, but too late. He, Wolfram and Oskar show some kind of closeness in their mourning over Elisabeth.

And about the music…

All three acts were wildly cheered by the audience in the Bayreuth Festspielhaus, with some booing after Act Three largely drowned out by the ovations. Zhidkova, as Venus, earned the strongest applause for her powerful and sultry performance, and it seemed utterly incomprehensible how the finely-polished role, both in the singing and in the acting, could have been mastered on short notice after the soprano who'd been originally cast was incapacitated after a stage accident. 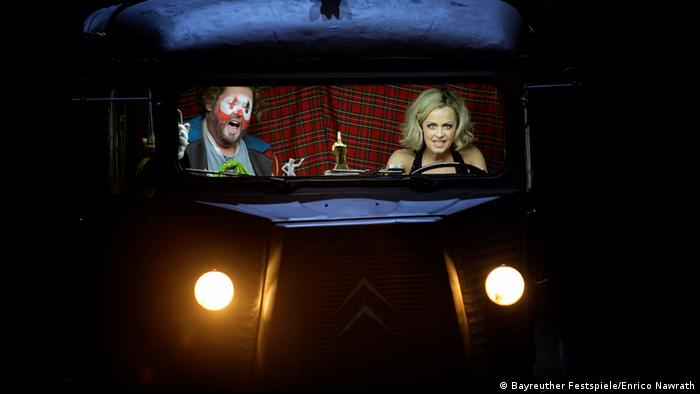 As Tannhäuser and Venus find out, anarchy can be fun — for a while

Norwegian soprano Lise Davidsen sings the role of Elisabeth with a clear, penetrating and pristine voice — and as with Zhidkova, the qualities of the performance fit the character.

Also warmly cheered was the American tenor Stephen Gould for his impeccable pitch and differentiated nuances of expression. And as Wolfram von Eschenbach, German baritone Markus Eiche beautifully sculpted his "song to the evening star."

It was, in fact, a strong cast overall, and the chorus and orchestra performed impeccably under the Russian maestro Valery Gergiev. Giving his Bayreuth debut, Gergiev was the only protagonist to reap some substantial booing at the end. That can probably only be explained politically, by his admiration for Russian President Vladimir Putin, as this reporter has never heard the overture to Tannhäuser rendered more beautifully or meaningfully, or all the musical resources better appointed throughout the four-hour marathon.

That is a feat that many other maestros have failed to attain from the Bayreuth Festspielhaus pit, a place that is notoriously difficult to work in.

So far, it has been difficult to get a hold of documents of the renowned composer. But that will be much easier after the Wagner National Archive has been digitized. (28.05.2018)