Swiss and tourists alike are flocking to a Lake Geneva town to celebrate the region's winemakers in a once-in-a-generation spectacle. Organizers said the festival "highlights the work on the vineyard." 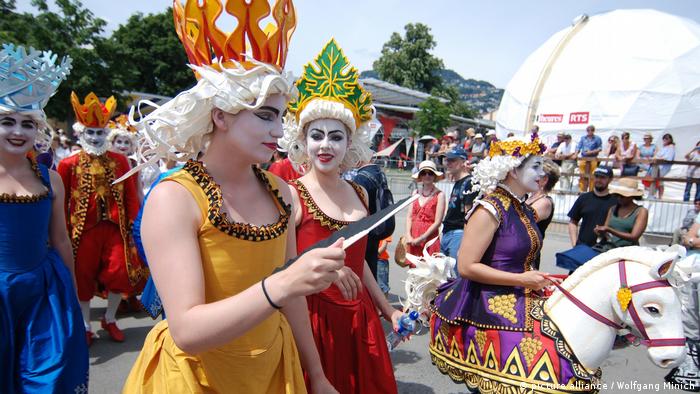 The Swiss town of Vevey this week kicked off its once-in-a-generation winemakers' festival, "Fete des Vignerons."

"It's been 20 years that we've been waiting for this moment now, and it's crazy," said a 31-year-old physical therapist participating in the celebrations in Vevey, a town on Lake Geneva.

Thousands of dancers, actors and extras were brought on for the festival, which has a budget of 100 million Swiss francs (€90 million, $102 million). Some observers even described the kickoff as an Olympics-style show.

Celebrations officially started on Thursday and run through to August. The festival, which began in 1797, now takes place once every 20 years in a purpose-built arena that holds up to 20,000 people. 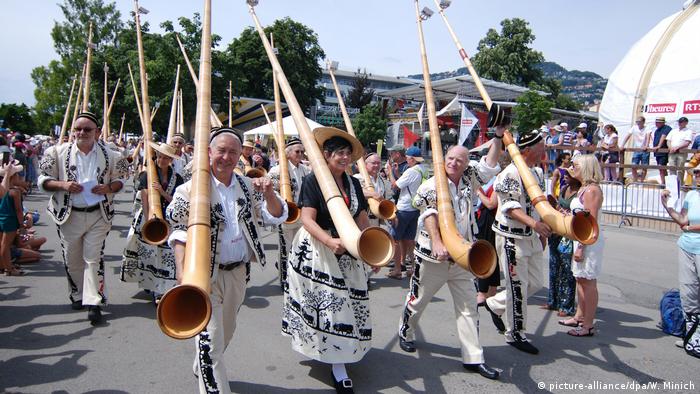 Many participants dressed in traditional Swiss outfits and carried Alphorns

Scarcely known outside of the country due to limited exports, Swiss wine uses several varieties of grapes, including pinot noir, merlot, chasselas and gamay.

"Because of the exceptional scarcity of wine produced in this region, even if you are friends with a winemaker, you might sometimes manage to buy just six bottles — because he likes you," said Frederic Hohl, executive director of the festival.

"How lucky we are in this region to be able to enjoy this wine. And really, this show highlights the work on the vineyard, on the land. And you can feel it when you taste the wine and when you watch the show, you can feel this relation to the land."

Switzerland's Patrouille Suisse squadron has apologized for making a fly-by over the wrong municipality. Instead of marking the centenary of an aviation pioneer's death, it startled visitors at a yodeling event. (08.07.2019)