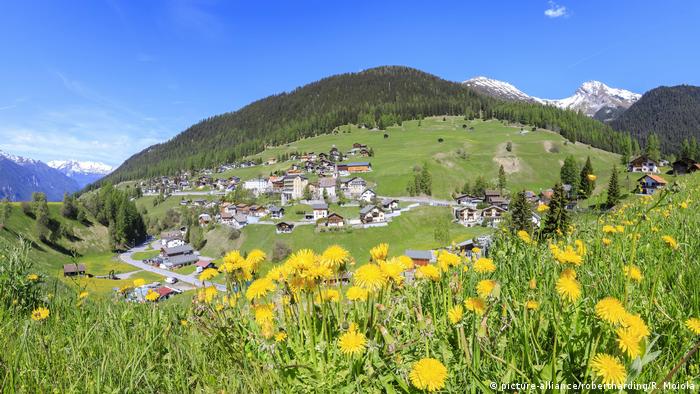 The wholesome world of Heidi? Pesticides and herbicides are commonly used in conventional Swiss agriculture

Wine grower Jean-Denis Perrochet fills his tractor's spray tank with diluted milk. That's what he uses to get rid of fungus on the vines on his vineyard near the town of Neuenburg in northwestern Switzerland.

Perrochet and his family started exclusively using organic farming methods back in 2012. They do not use chemical pesticides, weed killers or artificial fertilizers. Instead, they enrich the soil with homemade compost and remove weeds mechanically.

"We create in a healthier way — that's the advantage of these methods. We don't spread poison," said Perrochet. "Before, with the synthetic sprays, there was a feeling that it wasn't good for people or the environment." 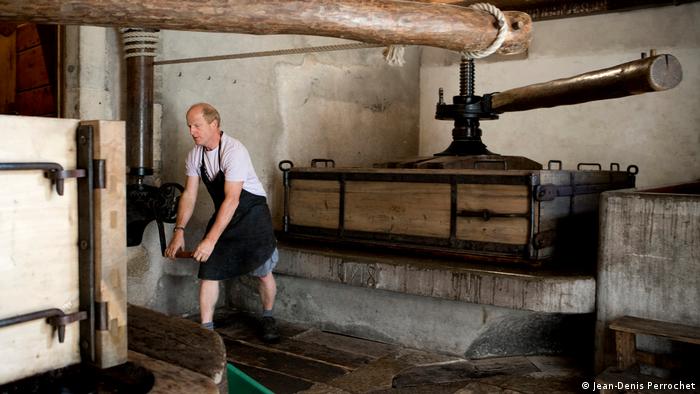 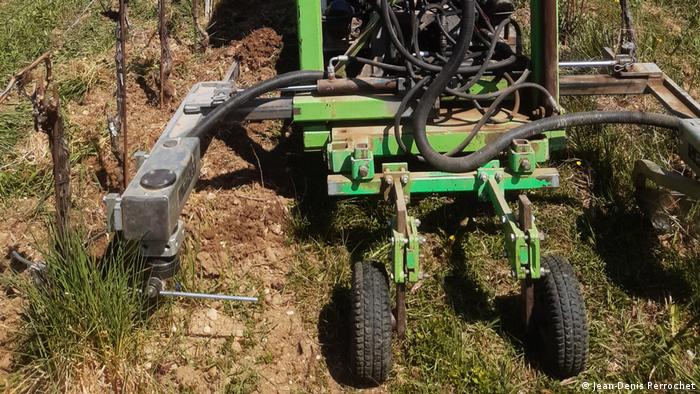 Perrochet does not use chemicals at all in his vineyards. Weeds are removed mechanically

Perrochet says the switch to organic complicates an already difficult job. But he is convinced that all farmers can live without pesticides. That is why the vintner and fellow campaigners launched the people's initiative "For a Switzerland without artificial pesticides" in 2016.

The initiative has since gathered enough support to force the Swiss parliament to hold a referendum on June 13. If successful it would ban all pesticides containing substances that do not exist in nature and would affect not only farmers, but anyone who uses pesticides, including amateur gardeners. Swiss voters will also decide on a second clean drinking water initiative which wouldn't totally ban pesticides but would stop farmers who use them from claiming government subsidies.

Swiss not neutral on pesticides

Pesticides have been a public concern in Switzerland for some time. In 2019, a study by the Swiss Water Research Institute EAWAG on pesticide residues in groundwater made headlines and in 2020, the country banned fungicide chlorothalonil after the EU classified it as a potential health hazard. 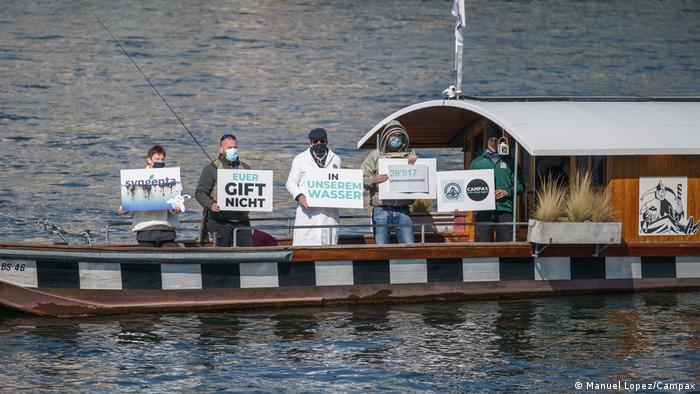 Anti-pesticide demonstration in front of Syngenta headquarters in Basel on April 15, 2021

But big farmers' associations and groups of lobbyists, rallying under the slogan "2x No to the extreme agricultural initiatives," are pushing back against the anti-pesticide campaigns.

In the run-up to the vote, agrochemical giants Syngenta and Bayer have been promoting the benefits of pesticides online and in social media campaigns, while the Swiss government is also urging the public to reject the initiatives.

If the pesticide ban wins out, it would have serious consequences, including a drop in domestic food production that would see a surge in imports to fill the void and a rise in food prices, said Sandra Helfenstein, spokeswoman for the Swiss Farmers' Union.

"These agents are used because there are diseases and pests," said Helfenstein. "They're not going to suddenly go away just because we don't want to use pesticides anymore."

The agricultural sector has been making an effort to cut its dependency on pesticides, adds Helfenstein. Synthetic pesticide use in Switzerland has dropped 40% in the last decade.

Farmers feel they're being singled out and "bashed" unfairly in the debate.

Vegetable farmer Thomas Wyssa wants more understanding from the public about when and why pesticides are necessary. He already has problems producing his Brussels sprouts. They're planted in May and harvested in November. The crop has to contend with insects, diseases and the weather during the long cultivation period. A ban would make his job even more difficult, he says.

"We don't want to poison anyone. We eat our own vegetables ourselves," said Wyssa.

The good and bad of pesticides

Intensive farming  with pesticides protects plants from pests and diseases, increasing yields and allowing more people to be fed than ever before in human history. But it often comes at the expense of the environment.

Pesticides harm insects directly as well as indirectly  through toxins and by killing off the undesirable weeds that are their source of food and refuge. When insects decrease so too do the birds that feed on them.

Chemicals also rarely remain in the fields where they're sprayed. Wind and rain spread pesticides into rivers, lakes and other habitats and studies show extreme declines in flora and fauna on the edges of farmland.

Some pesticides are suspected of causing long-term damage to human health. Studies show farmers are more likely than the average population to suffer from diseases such as nervous system disorder Parkinson's  and cancers like non-Hodgkin's lymphoma. In France, Parkinson's disease is now recognized as an occupational hazard for farmers.

Still, scientists question whether eliminating all synthetic pesticides is possible and if doing so would weaken food security.

Agroscope, the research center of the Swiss Federal Office for Agriculture, studied potentially high-risk synthetic pesticides that could be replaced. Some of these pesticides could be easily eliminated, according to the study. Wine and fruit farmers would have little difficulty in adjusting but cultivating sugar beets, corn and rapeseed would be extremely difficult, if not impossible.

Organic farming has other drawbacks too.

A meta-analysis published in the journal "Nature" found average harvests on organic farms were about 15% smaller compared to conventional farms. A switch to purely organic cultivation would require more land to compensate for lower yields. 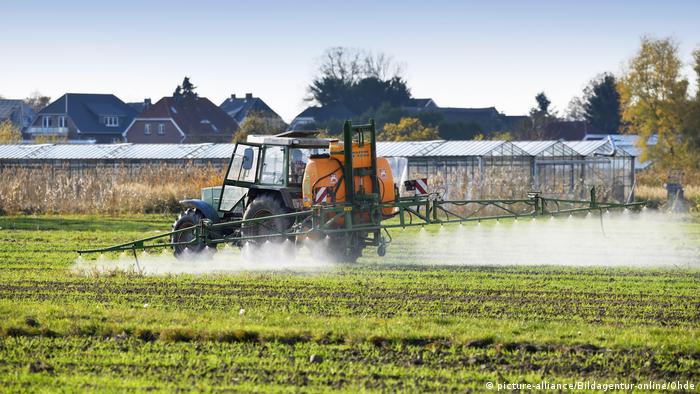 Not all land is suitable for organic farming, said says Arndt Feuerbacher, a researcher in sustainable agriculture at the University of Hohenheim in the German state of Baden-Württemberg.

On organic farms, farmers usually plow the lands to get rid of weeds, but that worsens soil erosion, especially in areas prone to it. Conventional agriculture offers cheaper, less labor-intensive alternatives, including the use of herbicides to kill the unwanted plants.

"100% organic is very difficult to justify from an economic standpoint, and it doesn't necessarily make sense from an ecological standpoint either," said Feuerbacher.

If more soy and corn have to be imported from Brazil due to lower domestic yields, more rainforest will be lost to make way for cultivation. The problems will simply be shifted to other regions of the world, Feuerbacher added.

But a shift to organic agriculture could be feasible if people ate fewer animal products  and wasted less food, say scientists.

Some 71% of the world's arable land is used to grow livestock feed, and 18% is used to cultivate food for human consumption. At the same time, a third of what we produce is never eaten, according to the United Nations Food and Agriculture Organization (FAO).

Switzerland isn't the only place where people are pushing for a pesticide-free future. The alpine village of Mals in northern Italy made headlines in 2014 when residents voted to ban all synthetic pesticide use.

Even without a pesticide ban there is more and more organic farming in Switzerland, like here in Ifenthal

A court eventually overturned the decision after several landowners pushed back. But the local government plans to appeal that ruling. The jury is still out on the ban but Koen Hertoge, one of the people behind the original campaign, said he has seen a shift in attitudes in Italy.

"People have become aware that pesticides are a dead end," said Hertoge. "More and more farmers in this region are converting to organic farming  and use fewer pesticides."

The same goes for Switzerland. One in six farms in the country is now certified as organic and the number is growing, according to organic farming umbrella group, Bio Suisse.

Polls show the Swiss pesticide ban stands only a tiny chance of passing, but campaigners like wine grower Perrochet hope the public debate will at least spur farmers to rethink the issue and that organic farming continues to bloom.

The Alpine country could become the first in Europe to outlaw synthetic pesticides. Swiss voters will also decide whether to limit subsidies to organic farmers who use fewer antibiotics and more locally produced feed.

Mexico's strawberry farms damage soil and are a drain on water. That's why small-scale farmers are shifting toward more sustainable forms of cultivation.

K-pop: The wave of success that won't stop