Swedish justice minister: ′The blame is on Assange, not Sweden′ | Europe | News and current affairs from around the continent | DW | 28.06.2017

Swedish justice minister: 'The blame is on Assange, not Sweden'

After Sweden dropped its investigation into WikiLeaks founder Julian Assange, Justice Minister Morgan Johansson has blamed Assange for the lack of progress on DW’s Conflict Zone. 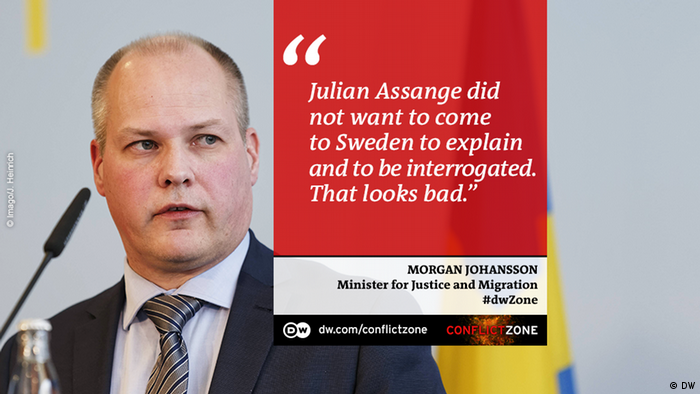 "What is looking bad is that Julian Assange did not want to come to Sweden to explain and to be interrogated," the Swedish Justice and Migration Minister Morgan Johansson told DW.

Swedish prosecutors had dropped an investigation into allegations of rape in May 2017, ending a seven-year standoff with Assange's legal team. Sweden had issued a warrant for the Australian's arrest in November 2010. Assange was accused of having raped a woman in Sweden and of having sexually harassed others. He has denied the charges and criticized the prosecutor's case as being politically motivated.

When it was announced that charges were dropped, Assange told reporters from the Ecuadoran embassy balcony in London that he welcomed the decision but added: "The proper war is just commencing."

Asked why it took Sweden seven years to close the case, Johnsson said: "First of all, it's the prosecutor that is doing this investigation. It's not the government, it's a prosecutor. Second, I mean, the blame is on Julian Assange."

"There are people that have said that they had been victims of wrongdoing, victims of crime that Julian Assange has committed. These people also actually have the right to (…) be vindicated. And that's why the whole system is working," the minister told DW’s Michel Friedman on Conflict Zone.


Has the Swedish model of tolerance reached its limits?

Meanwhile, the Swedish migration system has arguably reached a breaking point. With a population of almost 10 million, Sweden became a top destination for people fleeing conflict. In 2015, the country received more than 160,000 refugees; an estimated 45 percent of all asylum requests were rejected.

Stockholm has voted in favor of tougher rules for new arrivals in June 2016. The rules were "designed to greatly reduce the number of asylum seekers while improving the welcome and settlement," however the law was harshly criticized by the aid organizations Red Cross and Save the Children.

"We have between 400 and 500 asylum seekers each week coming to Sweden. So we haven’t shut our borders but we now have a level which we can handle. And we didn’t have that in 2015," Johnsson said.

He also partially blamed other countries in Europe for the lack of a continental strategy and sufficient cooperation: "Now we have control over that situation. But it all comes down to the problem that Europe does not take this issue as a continent."

Sweden is also confronted with growing levels of Islamophobia, as well as extreme right-wing violence and, early this year, it faced its first major terrorist attack. 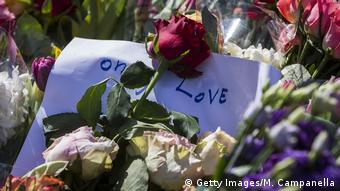 Five people were killed in a terrorist attack in central Stockholm in April 2017.

After an asylum seeker killed five people and injured 19 by driving a truck into pedestrians in central Stockholm in April, Johnsson said Sweden had to "close the gaps" in its terrorism laws. The attacker, who was an asylum-seeker was reportedly wanted for "religious extremism" in his native Uzbekistan.

Asked whether there was a connection between migration and terrorism, Johnsson told DW: "There is no direct link like that. But of course, as in every country, we've had problems with people becoming radicalized in different ways and we have to be better to trace them as soon as we can and also to sentence them for the crimes that they have committed."

Stockholm has already controversially banned fundraising and fighting for terror groups despite fears that the a ban would clash with the Swedish constitution, which guarantees freedom of association. Talking about stopping Swedes from traveling to the Middle East to join the terror group ISIS, Johnsson said: "We criminalized that a year ago. And so by doing, these kinds of journeys have I'd say almost stopped. We've had 300 people going there and 150 coming back."

He added: "We don't ban, we don't ban views but we ban acts as if they are into any kind of activities connected to terrorism. Of course that's an issue for the police."

Swedish authorities have issued a warrant for the arrest of Julian Assange, the founder of the WikiLeaks whistle-blower website. Assange views the charges as a response to his publication of classified war documents. (18.11.2010)

After receiving 160,000 asylum claims in 2015, Stockholm has voted in favor of tougher rules for new arrivals. The regulations will also affect refugees wanting to join their families in Sweden. (21.06.2016)

Denmark, Sweden and Germany have said the passport-free Schengen zone must be preserved even as temporary border checks go up. They said the answer to the refugee crisis lies at the EU's external borders. (06.01.2016)