Sweden has held a nationwide minute of silence to honor the victims of the truck attack in Stockholm. Two suspects have been arrested so far, one of them a rejected asylum seeker from Uzbekistan. 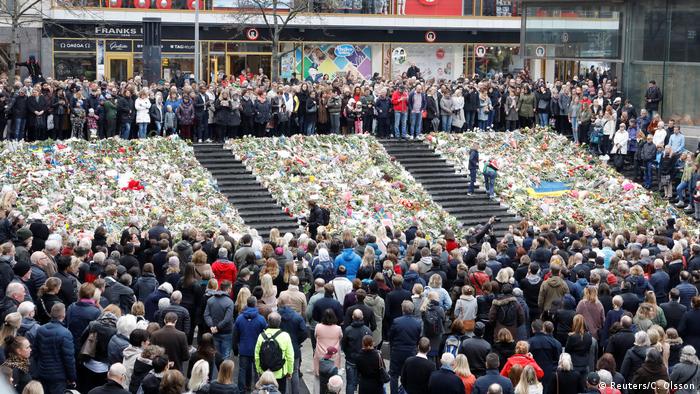 All public life in Sweden halted for one minute at noon local time Monday as the nation remembered four victims killed in the suspected terror attack three days ago.

The victims included two Swedes, one Briton and a Belgian national, who were killed when a rejected asylum seeker drove a stolen beer truck through a crowd in a pedestrian shopping street in downtown Stockholm. Prime Minister Stefan Lofven told a crowd gathered in front of Stockholm City Hall that the countries of the four people killed had all witnessed "horrendous acts of terrorism, but we have also seen the strength and determination and power of our democratic societies."

"We will never surrender to terror. We will get through this together," Lofven said.

Of the 15 injured, 10 remain in hospitals, including a child. At least four of the 10 are considered to be seriously injured.

Thousands of people gathered in central Stockholm on Sunday for a vigil against terrorism and to honor the attack victims.

The main suspect in the attack is a 39-year-old asylum seeker from Uzbekistan who went underground after his application was rejected last year.

While authorities have not named the suspect, Stockholm District Court papers identified him as Rakhmat Akilov.

Akilov, who was arrested hours after the attack, is being held in custody on suspicion of terrorism related offenses.

Police commissioner Dan Eliasson said Monday he was "very confident" they had the right man based on evidence gathered and interviews with the suspect.

"It is up to a prosecutor to prove this in court," he told a news conference.

"We know that he showed interest for extremist organizations like the 'Islamic State,'" said Swedish police chief Jonas Hysing.

The style of the attack resembled other IS-inspired terror attacks, including ramming attacks in Germany, France and Britain.

Meanwhile, Swedish police arrested a second suspect accused of involvement in the attack.

"Police have arrested a person and we appointed a public defender," said Helga Hullmann, a judge at the Stockholm District Court.

Four other people questioned about the attack have been released.

DW reporter Michael Da Silva happened to be in Stockholm when a truck drove into a department store in the center of the Swedish capital. He recounts his impressions of the scene and its aftermath. (08.04.2017)