Swedish police said 15 people were also injured in the attack, with the news agency Reuters reporting that nine of them were in a serious condition.

Police said the first man arrested "may have had some kind of connection" to the attack, but that the driver remains at large.

A second man, said to have ties to the first suspect was arrested overnight in Hjulsta, a suburb northwest of Stockholm, according to Swedish public broadcaster SVT, which cited police sources. However, police spokesperson Lars Bystrom told German press agency dpa that he could not confirm whether the second arrest was indeed connected with the deadly truck attack.

National police chief Stefan Hector said late Friday that a massive manhunt was underway for the driver of the truck, adding that the police's "working hypothesis is that this is a terror attack." 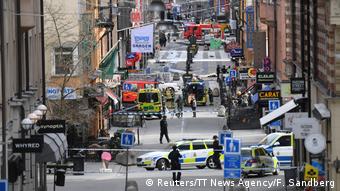 A view of the street scene after the truck crashed into a department store in Stockholm, April 7.

The tabloid "Aftonbladet" reported earlier that a man had been arrested in Marsta, just north of the capital. The man had "slight injuries" and had claimed responsibility for the attack, the daily reported.

Police earlier had released a picture of a man wearing a grey hoodie and said they were looking for him. They did not rule out the possibility that other attackers were involved.

"We went public with information and a picture of a person that we were interested in," regional police official Jan Evensson told a news conference later on Friday. He added that the first person arrested resembled that description.

Lofven said the country is in "a state of shock" over the attack. "The aim of terrorism is to undermine democracy. But such a goal will never be achieved in Sweden," he said. 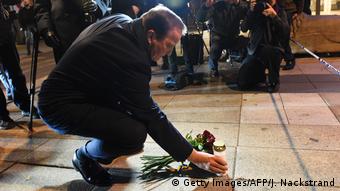 Swedish PM Lofven lays flowers and a candle at the scene

A hijacked beer truck reportedly rammed into the upscale Ahlens department store on the busy Drottninggatan street, a major pedestrianized shopping area in the center of the city and above the city's main railway station.

A spokeswoman for transport company Spendrups told the French news agency AFP that the truck "had been stolen during a delivery to a restaurant."

The area was cordoned off and large numbers of police and emergency services were at the scene. All subway traffic was also closed down in the city and the parliament was put on lockdown.

Police told people to stay away from the city center after reports of shots being fired at two other locations in the city.

"There are deaths, and many injured," Nina Odermalm Schei, a spokeswoman for Swedish intelligence agency Sapo, told AFP shortly after the attacks without giving a precise figure. 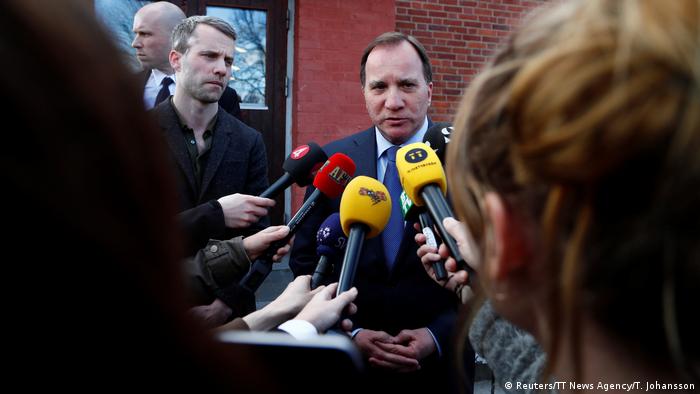 People on the scene were swift to post video footage on social media.

"Police received a call from SOS Alarm that a person in a vehicle has injured other people on Drottninggatan," police wrote on Twitter.

A witness told the news agency Reuters that he had seen a number of body-like forms covered by blankets at the scene of the incident.

"I turned around and saw a big truck coming towards me. It swerved from side to side. It didn't look out of control, it was trying to hit people," Glen Foran, an Australian tourist told Reuters.

Sweden's King Carl XVI Gustaf said in a brief statement that the royal family had noted the attack "with dismay" and sent condolences to the families of the victims and injured. "We follow developments but as of now our thoughts go to the victims and their families," he said.

German Chancellor Angela Merkel's spokesman said her government's "thoughts are with the people in Stockholm, the injured, the relatives, first responders and police." 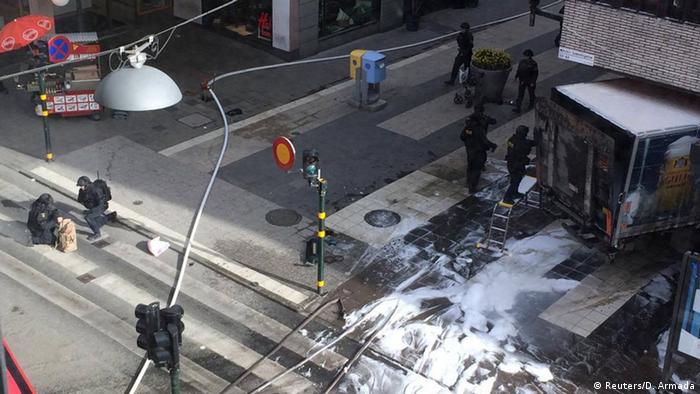 A view of the site where the truck drove into a crowd and into a department store in Stockholm.

"That Sweden is now a victim of such a terrorist attack has also deeply shocked us," the two foreign ministers said at a joint press conference in Mali.

Germany and France experienced deadly truck attacks in 2016 that were claimed by the self-styled "Islamic State" (IS) group.

Police spokesman: 'No contact with the person who drove the truck'

The president of the European People's Party (EPP) wrote: