Suspected shoplifter refused fine option because he is ′a foreigner′ | Germany| News and in-depth reporting from Berlin and beyond | DW | 11.11.2015

Suspected shoplifter refused fine option because he is 'a foreigner'

A shop-lifting case involving an asylum applicant has revived debate on racial profiling in the German police. On the suspect's charge sheet, officers did not give him the option of a fine because he was "a foreigner." A shoplifting case in the eastern German city of Chemnitz has attracted unusual attention this week. The suspect was alleged to have stolen 34.85 euros ($37.40) worth of goods, but though police generally drop such charges in exchange for a fine, this suspect was refused that option - on the grounds that "the accused is a foreigner."

The case became public after the suspect's attorney Mark Feilitzsch tweeted a scan of his client's charge sheet.

Paragraph 153a, mentioned in the tweet, allows suspects to avoid a court case in exchange for a fine if it is considered in the public interest, and if the crime is not serious. It has been used by foreigners in Germany before, and for serious financial crimes: most recently in the high-profile corruption case of Formula One boss Bernie Ecclestone, who paid the Bavarian state $100 million when he faced a major bribery trial in 2014.

As the case spread through social media on Tuesday, bringing outrage in its wake, the Chemnitz police and state prosecutors issued a joint statement explaining why the suspect, an asylum seeker, had been denied the option of a fine.

"Firstly the accused and one co-accused did not cooperate in clearing up the facts of the case," the statement read. "Both also refused the services of an interpreter. That meant it could not be ascertained whether or not the two accused had access to enough cash [... ]. Since they were asylum applicants, the financial means available to them are only for their subsistence."

The statement also tried to explain why the police officer had chosen to sum all that up with the sentence: "The accused is a foreigner." "The note is formally correct but also meant as an 'at first glance' piece of information to indicate the missing preconditions in this simplified procedure," it said.

Feilitzsch was not impressed. "It's new to me that the accused has a duty to cooperate with the investigation," he told DW. "In German law the suspect's rights are relatively central, including the right to silence. There are a lot of cases where I think it's a sensible defense strategy for suspects not to make a statement."

In addition, the attorney said it was not up to the police to assess whether or not a suspect has enough cash (which he estimates in this case would have amounted to around 100 euros) to pay the fine. "Of course, asylum seekers are usually not exactly rich," he said. "But there certainly are asylum seekers who have access to money." He also pointed out that in other cases where the suspect has no money, it is possible to pay in the form of community service.

It's not the first time that Feilitzsch has noticed discrimination from authorities. "I had another verdict where the probation question was very clearly justified on the grounds of the nationality of the client," he said. "That's something I see as equally scandalous. In other cases it's usually not written in the judgment itself - these are things that basically happen subconsciously." 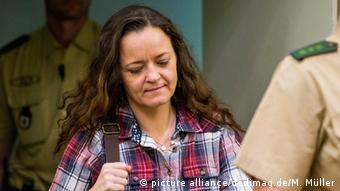 Hendrik Cremer, adviser at the Berlin-based German Institute for Human Rights, said that racial discrimination in the police force has come to light following investigations into the police's handling of far-right murders involving the so-called National Socialist Underground.

"When the investigations into the NSU terror were made public, very one-sided and discriminatory investigation methods were noticed," he told DW. "It certainly became clear that there is a problem in the police and judiciary."

"We have often proposed measures for the police and judiciary, so that anti-discrimination measures become a part of the training," he added. "That has also been covered by European and international human rights organizations."

Though anti-discrimination training is currently part of police training in Germany, Cremer argues that the NSU trials have shown that, "both in training and service guidelines," what is currently in place is not sufficient.

Several international bodies, including the UN's Committee on the Elimination of Racial Discrimination, have called on Germany to do more to tackle institutional racism in its police force. A report published by the European Commission against Racism and Intolerance (ECRI) in 2014, found that in Germany, "there is a lack of support for victims of racist acts or racial discrimination on the part of government bodies, for example through racial profiling."

US President Barack Obama has invited a 14-year-old Muslim boy from Texas to the White House after he was arrested for bringing a homemade clock to school. Police said it could have been mistaken for an explosive. (17.09.2015)

Germany has come under fire from a United Nations panel reviewing efforts to eliminate racism in the country. Recent events, including PEGIDA rallies and the alleged arson attack on a refugee home, have raised concerns. (05.05.2015)

Activists say police officers often pick dark-skinned people out of a white crowd for security checks. The federal police reject the accusations of racism. They say anyone could be checked. (02.07.2013)