Germany has come under fire from a United Nations panel reviewing efforts to eliminate racism in the country. Recent events, including PEGIDA rallies and the alleged arson attack on a refugee home, have raised concerns. 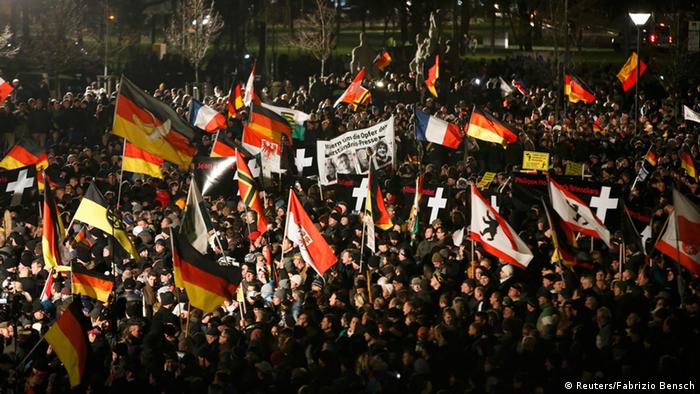 "Racism in Germany is not only found in extreme right-wing circles, but in all parts of society," the German government admitted to the UN Committee on the Elimination of Racial Discrimination in Geneva on Tuesday.

"Many politicians and parties fail to consistently disassociate themselves from racist resentments, stereotypes and prejudices," added Selmin Çaliskan, Secretary General of Amnesty International in Germany. She says this contributes to support for the "stigmatization of minorities," promoted by the anti-immigrant PEGIDA movement among others.

The weekly right-wing PEGIDA rallies saw a huge surge in popularity between October and February, with numbers reaching as high as 25,000 in the eastern German city of Dresden.

But Almut Wittling-Vogel, a Justice Ministry official representing the German government pointed out that the protest movement has since been outnumbered by counter-protesters at demonstrations.

"We are happy that we can also cite examples of an active civil society," she said before the panel.

Wittling-Vogel also promised that Germany would step up the prosecution of racist crimes.

The pledge to increase convictions came in light of concerns raised by the UN convention over alleged investigation blunders into the suspected murders of migrants by the National Socialist Underground (NSU). The trial of the group's last known member, Beate Zschäpe, is currently ongoing in Munich.

On Wednesday, the second day of the two-day hearing, German human rights groups are expected to criticize the government for failures in the fight against racism.

Among other issues put before the panel will be persistent claims of "racial profiling" by German police in routine checks on trains.

"Such actions would undermine the confidence of ethnic minorities in the German police," Amnesty International warned. The German government's report denied the claims.

In around two weeks the panel of 18 independent experts will publish proposals to improve anti-racism efforts in Germany and further implement the UN convention against racism, which came into effect in 1969.

Petra Follmar-Otto, head of the German Institute for Human Rights, said she hoped the hearing would "finally make the fight against racism in Germany a major policy field."

Seventy years after the liberation of Bergen-Belsen, survivors gathered to remember the concentration camp's estimated 53,000 victims. They told DW's Kate Brady of the horrors they saw and some of their fears. (26.04.2015)

It is a seemingly endless source of controversy: the National Democratic Party of Germany (NPD), a far-right group purportedly behind recent protests in Tröglitz. DW looks at a running attempt to have the party banned. (06.04.2015)