Surrounded, but alone: Cracking the co-working conundrum | Germany | News and in-depth reporting from Berlin and beyond | DW | 28.10.2014

Co-working office spaces are booming, and they're filled with interesting freelancers. The problem? They hardly talk to one another. A Dutch entrepreneur sees an enormous opportunity. 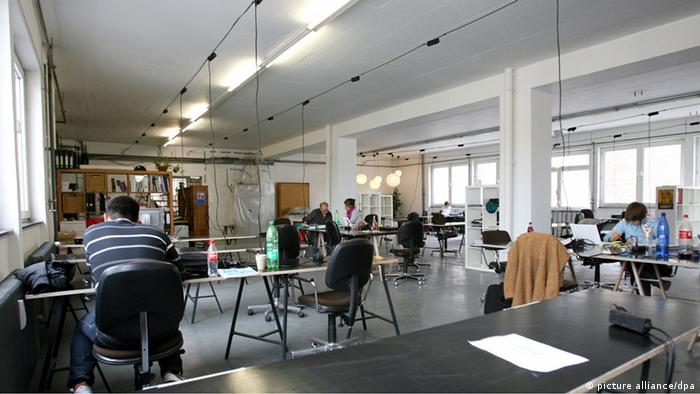 For freelancers in the digital age, co-working spaces are the new budget offices. They combine the quiet of a library with the social atmosphere of a cafe. They attract talented people - programmers, writers, artists - who often sit shoulder-to-shoulder without an idea of what their neighbors actually do.

Co-working spaces are growing apace: 60 percent of existing co-working space owners plan to expand operations this year. In the US, the world's largest market for such spaces, annual growth is even higher at 83 percent year on year.

But according to Jessica Tangelder, a co-working consultant in the Netherlands, co-workers often face social isolation in their new workplaces. Sure, they're in a room full of people. But how often do they interact with their neighbors? Tangelder found social interaction to be rather low in the spaces she studied. So she created a platform that co-working space owners can deploy in order to foster interaction among co-workers.

"The purpose is really to accelerate relevant encounters," Tangelder said. "Some people call it serendipity. It's done in a really short amount of time - 20 minutes - because people are always busy."

Tangelder says that all too often, people with complimentary skills sit next to each other for months but never interact. This means lost friendships and missed business opportunities. 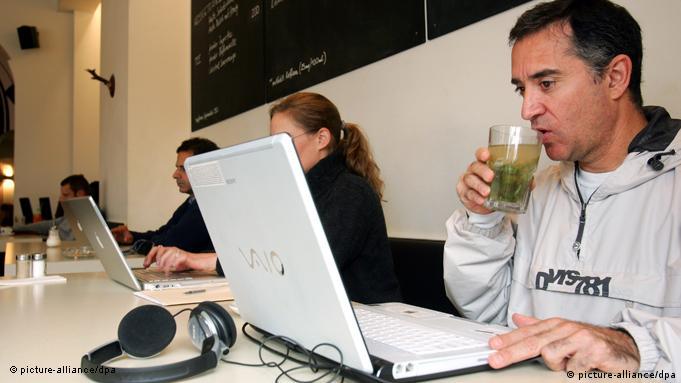 A wasted opportunity to network, trade tips or just make onself happier by talking to a human being

"What happens is, people are hiding behind their laptops," Tangelder explained. "It's not so much that they don't want to share. It's due to a threshold of overcoming their own boundaries of being vulnerable."

Tangelder's platform is moderated by a designated facilitator who's attached to the co-working space. That person's role is to publicize the event and corral co-workers into a common space. In some co-working spaces, such as the one in Utrecht where Tangelder created her program, networking time has actually been made mandatory.

Still other co-working spaces, like Berlin's Betahaus (pictured top), have begun offering free yoga as means of getting techies away from their computers and interacting with one another.

Maike Pulver, the Betahaus' yoga instructor, says she finds that co-workers at her space have to relearn the art of switching off electronic devices and focusing on the self.

"People are ‘thinking' themselves out of their bodies," Pulver said. "They're dealing with problems in India, and are Skyping with people in New Zealand, and can be all over just be all over the place, without really feeling the body."

Her free classes are also a networking opportunity for people at the Betahaus. Usually, after people have met at her yoga class, they begin to take coffee breaks together and perhaps even collaborate on projects.

"My aim is to help people become aware of who's working around them," Pulver said. "I want people to say hi in the hallway and be connected in an offline-way."

"These kinds of networking events at co-working spaces are a way of sharing social capital," Tangelder said. "This is what Pixar and Google do. These are really creative sessions that help you to get out of your comfort zone."

Tangelder says she wants to bring her networking platform to large co-working players like Regus. She also hopes to create a system to rank the world's best co-working spaces by their potential for serendipity - which she says will help co-working spaces and co-working brands set themselves apart as the market continues to grow.

Artists or youngsters looking for better life aren't the only immigrants heading to the German capital. Israeli IT professionals, who can get by quite well in their own country, are discovering Berlin. (09.10.2014)

Berlin Food Week just kicked off, offering visitors cooking demonstrations, lectures and food markets. It's proof of Berlin's food craze and the fact that its culinary scene is catching up with the rest of the world. (08.10.2014)

Listen to the audio report on shared office space