Sudan's protest movement: 'Now we are driven by anger'

Sudanese protesters are even more determined after the violent clampdown of the past days. Meanwhile, key regional players are following their own agendas. 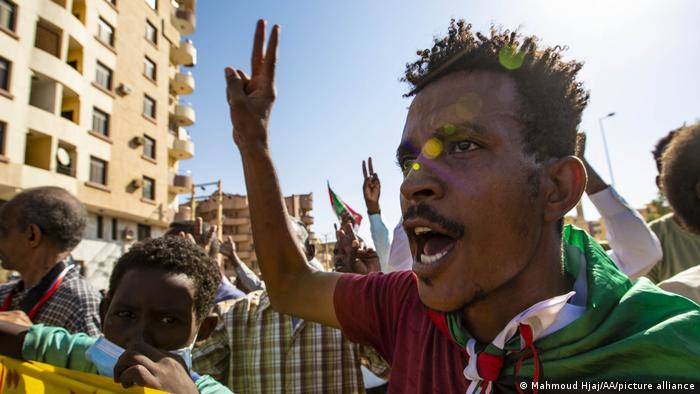 The messages came in without prior warning. On Thursday evening, millions of texts, photos and videos about the protests and the violent clampdown finally reached cell phones in Sudan.

"The footage is horrific," Rania Aziz, a 36-year-old activist in Sudan's capital, Khartoum, told DW in a video call. Then she started crying. "We are experiencing a national shock now," she said.

Almost two dozen protesters were killed by the military junta this week.

Following the coup on October 25, when General Abdel-Fattah Burhan dissolved the Sudanese government and declared a state of emergency, he had shut off mobile networks, internet and phones except for a few landlines in Khartoum, leaving the country of 44 million without digital communications for more than three weeks. 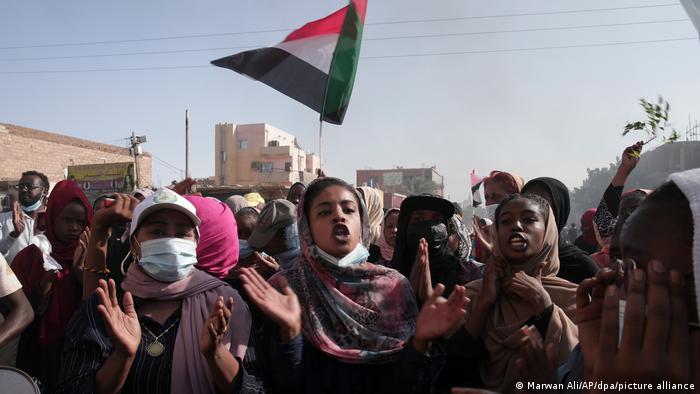 While this cutting of communication channels came as some surprise, the escalation itself didn't come out of the blue for those striving for democracy in Sudan.

And when the coup eventually happened, "people took to the street immediately," she said.

However, to organize the protests, activists were left only with offline methods.

Other activists put notes on cars, placed folded pieces of paper with information in people's hands and organized so-called advertising marches. "Some of us walked through the streets and chanted that there is a big march tomorrow," Aziz said.

Protests have also spread to other Sudanese cities beside Khartoum, with protesters all over the country calling, "No to military rule" or "The people choose civilian rule."

However, the protests have been met with violence by the military junta, and the situation has escalated this week.

Condemnation of the violence and calls for dialogue have come from Germany, the EU and the US, among others.

However, some of Sudan's regional neighbours seem to be following their own agendas.

"Since the transition brought about by the revolution in 2018 and 2019, Sudan's political map is a new reality, and neighboring countries such as Egypt and the Emirates, as well as Saudi Arabia, have different relationships with different parts of that government which impact their position," Theodore Murphy, director of the Africa program at the European Council for Foreign Relations, told DW on the phone. 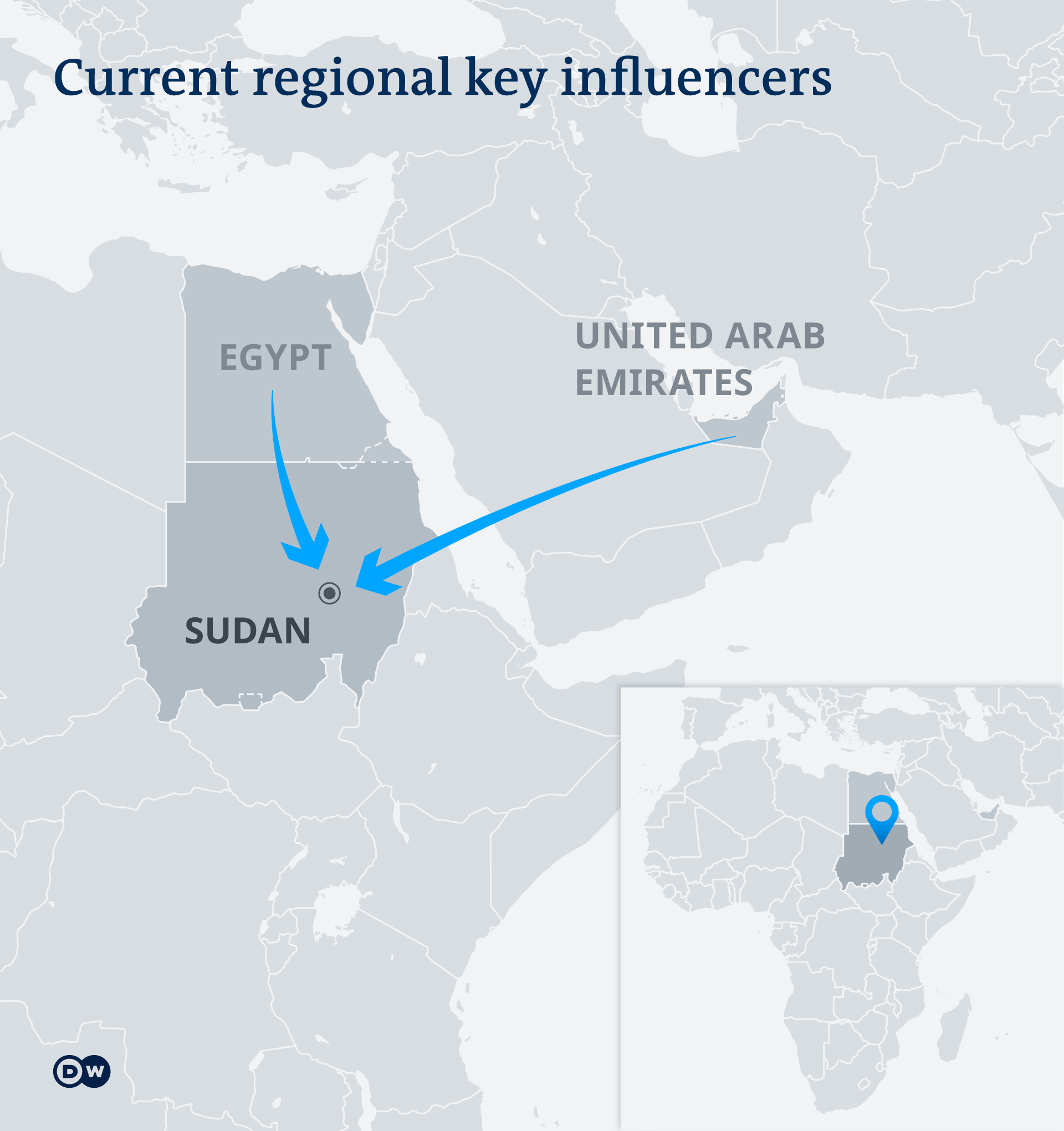 Particularly Egypt has had long-standing ties with Sudan's armed forces. "They see some similarities with their own experience during their own travel through a kind of popular revolution and then establishing stability," Murphy said.

However, instead of openly supporting Burhan, Egypt has remained silent. "We've seen an absence of Egypt's voice in public statements," Murphy observed.

The two other regional key allies of Sudan, the United Arab Emirates and Saudi Arabia, issued a statement on November 3 through their diplomatic formation, called the "Quad."

Together with the US and the UK, they highlighted the need to restore the civilian component of the civilian military transitional government as well as to release the then-detained Prime Minister Abdalla Hamdok, his wife and other senior officials. 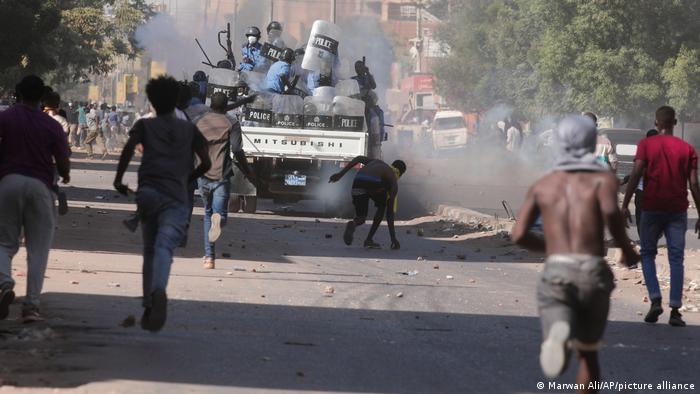 Activists are calling for the return of Prime Minister Abdalla Hamdok, who is now under house arrest

Yet the strongest divergence from Western calls among Sudan's regional neighbors is that there is some "openness for a different kind of civilian government," Murphy said.

He believes that the choice of civilian leader and the way that leader is chosen are delicate matters that could either restore an element of peace or fan the flames of protest.

"Prime Minister Hamdok is so important because the protest movement has seized him as its representative now," he told DW.

If someone else were chosen, he says, it would suggest that the military side was asserting its dominance.

"The political circumstances of that choice will be very difficult to overcome in terms of the protest movement, and I'm not sure that they will accept it at all," Murphy said.

Meawhile, the next demonstrations in major Sudanese cities have been organized.

The next days will show whether the junta can completely suppress and eliminate the popular rallies or whether the protests will keep going and force a standoff with the military and the repressive state apparatus.

"I think the latter is likely. I don't think the protest movement can be quashed and can go back home," Murphy said.

This view is echoed by the activist Aziz.

"They do want people to be fearful and to somehow suppress and oppress the voices. But it's not going to happen, because we are much more committed to our colleagues and our brothers and sisters who took to the streets for the same causes and died," she said.

"Now we are driven by anger."