The military seized power earlier this month from President Omar al-Bashir. Protesters campaigning for a return to civilian rule have called off talks with the interim leaders, urging supporters to step up their rallies. 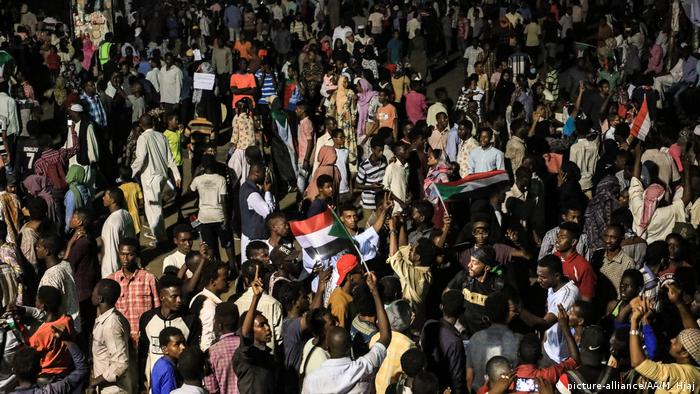 Sudanese protest leaders on Sunday vowed to escalate their demonstrations after the country's military rulers refused to commit to returning power to civilians immediately.

Addressing a rally outside the Defense Ministry in central Khartoum, protest leader Mohamed al-Amid said protesters were suspending their talks with the Transitional Military Council that assumed power after the overthrow of President Omar al-Bashir on April 11.

What did the protest group say?

New army ruler General Abdel Fattah al-Burhan promised on Sunday to respond to demonstrators' demands within a week. He told state TV that the council is "ready to hand over power tomorrow to a civilian government agreed by political forces."

The Sudanese Professionals Association (SPA), which led four months of protests to end al-Bashir's 30-year reign, fears the military — which is still dominated by the ex-president's appointees — will cling to power or appoint another general. The army initially said it would rule for up to two years while elections were organized.

What is the SPA's plan for civilian rule?

The SPA's Mohammed al-Asam told The Associated Press late Saturday that "we are ready with a clear plan for a transition with qualified names." The group was supposed to hold a press conference to announce its plans on Sunday, but it failed to happen.

How al-Bashir's regime was brought down

The 75-year-old's rule was marred by multiple armed conflicts and widespread corruption. He is accused of having used government troops and militias to brutally crack down on minority ethnic groups in the region of Darfur in western Sudan in 2003. It is estimated that 300,000 people lost their lives in the conflict.

Initially, protests were prompted by rising food prices but quickly morphed into a sustained challenge against al-Bashir's leadership. A week before the military coup, tens of thousands of protesters staged a sit-in outside the army headquarters in Khartoum, which also houses al-Bashir's residence.

Alaa Salah became the symbol of the protests in Sudan, standing for all the women who have been driving the movement forward. Could this demonstration of female force trigger an African Spring? (18.04.2019)

Over the past days, thousands have defied violence to camp outside Sudan's Defense Ministry. Growing support within the army and police could tilt the campaign for al-Bashir's ouster in the cheering protesters' favor. (10.04.2019)