Protesters in Sudan have overcome army attempts to disperse their sit-in and resumed their calls for civilian rule. German Chancellor Angela Merkel is among those calling for a quick transition to a civilian government. 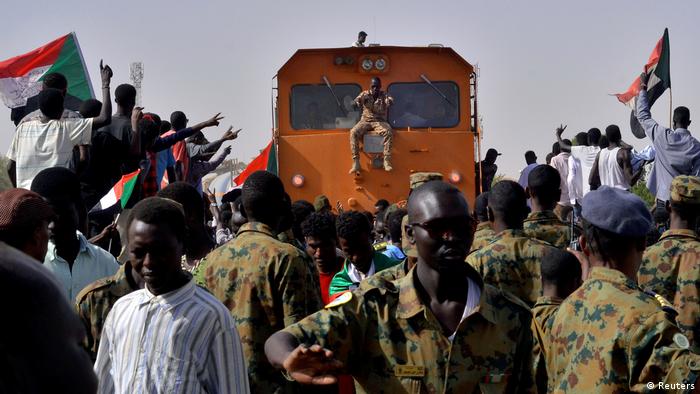 The organizers of ongoing protests in Sudan demanded the new military council be scrapped and reiterated calls for a civilian government on Monday, as protesters continued a sit-in outside the army headquarters in the country's capital of Khartoum.

Thousands of demonstrators continued to rally in support of demands for civilian rule, despite an apparent attempt to disperse them following the army's removal of President Omar al-Bashir last week.

"We want the military council to be dissolved and be replaced by a civilian council having representatives of the army," said Mohamed Naji, a senior leader of the Sudanese Professionals Association.

The organization also demanded the sacking of the country's judiciary chief and prosecutor general.

The African Union on Monday gave Sudan's military 15 days to hand over power to a civilian government.

Should the army fail to achieve this, Sudan's membership in the bloc would be automatically suspended until a return to constitutional order, the AU's Peace and Security Council said.

The AU said Sudan must hold "free, fair and transparent elections" as soon as possible.

The SPA's latest demands came as the military council faced increasing public and diplomatic pressure to hand over power to a civilian administration.

German Chancellor Angela Merkel called for "a rapid transfer of power to a civilian transitional government," in a phone call with Egyptian President Abdel Fattah el-Sissi.

"This must be followed by a credible, inclusive political process that meets the expectations of the Sudanese people with regard to economic and political reforms," her office said in a statement.

Sissi repeated Egypt's support for "the brotherly Sudanese people's will" and said Cairo would "not interfere in its internal affairs", according to a presidential statement.

Their comments come a day after the Khartoum embassies of Britain, the United States and Norway issued a joint statement calling for "inclusive dialogue to effect a transition to civilian rule".

Sudan: Germany calls for restraint from 'all sides' after coup

Germany is supporting the Sudanese in the hope of free elections and has put the crisis on the UN Security Council's agenda. Berlin insists that ousted President Omar al-Bashir face trial for war crimes in The Hague. (14.04.2019)

Sudan's new military rulers say ousted President al-Bashir will not be extradited while they are in power. Protesters, meanwhile, are calling for a swift return to civilian rule. (12.04.2019)