Alaa Salah became the symbol of the protests in Sudan, standing for all the women who have been driving the movement forward. Could this demonstration of female force trigger an African Spring? 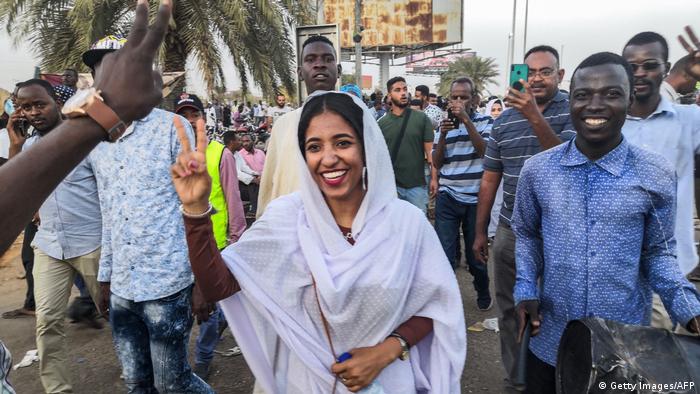 Starting in December last year, people in Sudan took to the streets to demonstrate against President Omar al-Bashir. After his removal in early April, the focus now is on installing a civilian government. Two thirds of the protesters are women — and without them the revolution wouldn't be what it is, says Sara Abdeljalil of the Sudanese Professionals' Association. "Women have died. They have been in the middle of the protests, have been detained, arrested and contributed significantly to this success so far. But they have also suffered a lot and I am always proud that, despite the suppression we have faced, our resistance was far, far larger. They pushed us down and we stood up, and we stood up by ourselves," she told DW.

A tradition of female demonstrations

"They ignited it! Women took it to the streets! They were the ones who said 'enough is enough!' So they are a catalyst. But in addition to that, they are also able to sustain it and in a way that is very peaceful, that is rational and sustainable," she said.

During the last 30 years, Sudanese women have experienced a massive encroachment upon their rights, largely stemming from a strict interpetation of Islam. This triggered the ongoing demonstrations for equal access to politics and education, and against female genital mutilation (FGM) and forced marriages.

Female protest has a tradition in Sudan, says Abdeljalil. Women were at the forefront of organizing protest action in 1964 and 1985, which on both occasions triggered the removal of authoritarian regimes.

"Women would often gather the groups, check if the situation was safe and then give a certain sign so the demonstrators knew they had to move," Abdeljalil said. 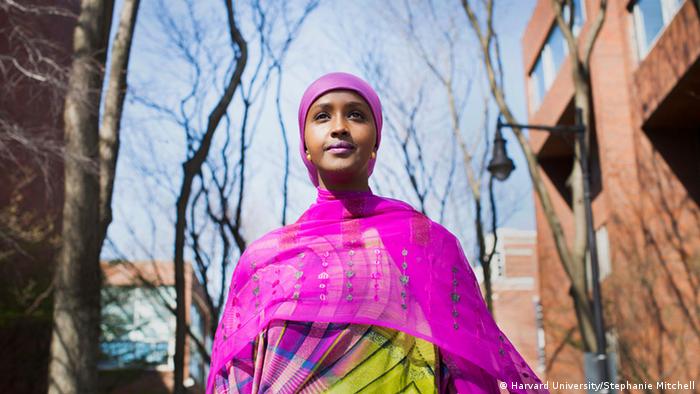 The start of an 'African Spring?'

During the Arab Spring of 2011, popular demonstrations in the Middle East and North Africa toppled several authoritarian regimes. Is such a development also conceivable for Sudan and sub-Saharan Africa?

"I have used the term "African Spring" since the beginning of the uprising in Sudan and I insist that we, as an African nation, are giving an example that peaceful resistance and unity can be successful," Abdeljalil said.

The protesters in Sudan are aware that what happened to many countries after the Arab Spring could also happen in their homeland. Most countries in which civilians chased the rulers out of office haven't experienced any major political or societal changes. Repression, civil war and jihadism are shaping many countries in the Middle East today. In Syria, Libya, Yemen and Iraq, for example, opposition protests and violent state repression escalated into civil war and the growth of terrorist groups such as the so-called Islamic State (IS). In Tunisia, where the Arab Spring began in 2011, initial hopes of genuine reform were later dashed.

Against this background, the Sudanese protesters are closely watching developments in their country since the removal of al-Bashir after three decades in power. The military forced the president to step down but there is still no civilian government. The ruling military council has promised to give power to the people after a transitional period. On Thursday, protesters called for fresh demonstrations to pressure the military council to speed up the transition process.

Sudan could be a pioneer

Fadumo Dayib thinks the protesters in Sudan could ignite a fire of revolution that could spread across Africa. "In other countries, where they feel the leadership is corrupt or undemocratic, I would not be surprised if they had a similar uprising, for example Tanzania and Uganda. There are also people that are very unsatisfied in countries that have relative stability but have dictatorships, I would not be surprised if Sudan became an example that would ignite uprising in those countries."

As the protests in Sudan continue, Fadumo Dayib has a clear vision for the future: "Knowing how feisty and revolutionary the Sudanese women are, I wouldn't be surprised if a woman is in the [presidential] office in the next 10 or 20 years. And that would be a scenario across the continent of Africa. This world soon will be a world for women, as it has been a man's world for centuries."

Sudan President Omar al-Bashir has been transferred to prison after a coup ended his three-decade rule. Uganda is considering granting asylum to the former leader. (17.04.2019)

Protesters in Sudan have overcome army attempts to disperse their sit-in and resumed their calls for civilian rule. German Chancellor Angela Merkel is among those calling for a quick transition to a civilian government. (15.04.2019)

Sudan's new military rulers say ousted President al-Bashir will not be extradited while they are in power. Protesters, meanwhile, are calling for a swift return to civilian rule. (12.04.2019)