Gale-force winds have swept across northern Germany, wreaking havoc for commuters traveling by rail and road, and causing power outages. Police have reported at least two fatalities. Follow DW for the latest.

Storm Ylenia hit northern Germany in the early hours of Thursday morning, with a wind speed of up to 152 kilometers per hour (almost 95 mph) recorded by the German Meteorological Service (DWD).

In Lower Saxony, all trains were canceled because of damage from the storm to the south of Hamburg, DB said, with disruptions across the network expected until Saturday.

Passengers who had bought tickets for the affected period will be able to use them again until February 26, or cancel them free of charge. Similar goodwill arrangements have also been put in place, where people can cancel seat reservations free of charge.

DB tweeted that fallen trees were to blame for disruptions, saying that one fell on the track between Bremen and Hamburg on Thursday morning, and another between Dortmund and Münster on Wednesday evening. Both lines had been cleared, but bad weather caused delays on train routes.

Lufthansa canceled 20 flights and announced there would be delays because of bad weather. The German airline asked people to check their flight status before traveling.

The stormy winds stood to affect mostly northern states like North Rhine-Westphalia and Mecklenburg-Western Pomerania, according to the weather service.

DWD expects the storm to subside by late afternoon and to be more over the North Sea and Baltic coasts by then. Still, gusts of winds up to 120 kilometers per hour (74 mph) are expected in the Harz mountains and in the highlands near the Czech-German border.

Another storm packing gale force winds is expected to strike the northern part of Germany on Friday into Saturday.

Just after midday, local police in the town of Bad Bevensen in Lower Saxony said the winds had caused one casualty — a 37-year-old man who died in a car after a tree collapsed onto a country road.

In the southern part of the Harz Mountains, in the state of Saxony-Anhalt, a 55-year-old man also died as a tree fell onto his vehicle.

Fire departments were put on high alert nationwide and Berlin's fire brigade declared a state of emergency early Thursday morning because of a surge in calls for their services.

Several volunteer fire brigades were put to action in Berlin as some neighborhoods like Lichterfelde reported fallen trees on cars. However, there were no initial reports of injuries from the German capital.

Authorities warned people against entering parks or forests in big cities, and zoos were to remain closed in cities like Berlin, Wuppertal (North Rhine-Westphalia), Magdeburg (Saxony-Anhalt). 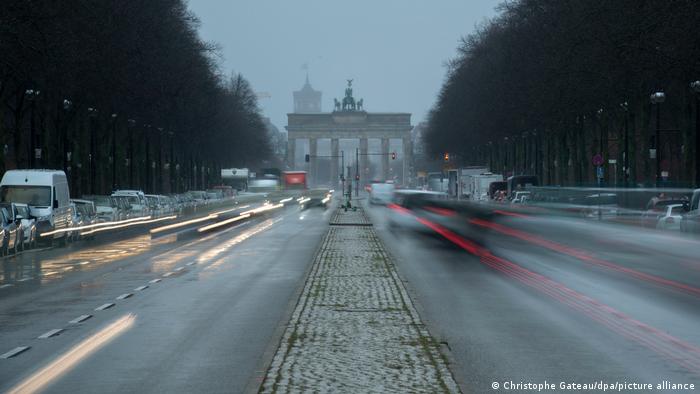 A misty Brandenburg Gate in Berlin

Storm surge leads to flooding in some cities

The Elbe River's waters rose to 1.5 to 2 meters higher than normal. But the storm surge was expected to be over by 5 a.m., with floodwaters expected to be highest in the port city of Hamburg.

Dramatic images of a wave smashing through the windows of a ferry on the Elbe River circulated on social media. 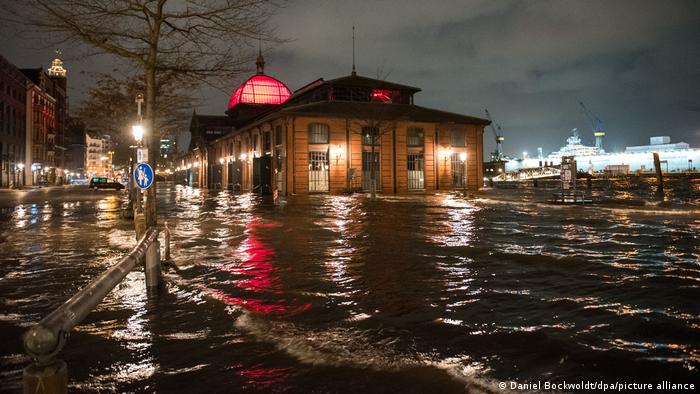 Germany's most populous state, North Rhine-Westphalia (NRW), announced a shuttering of schools. The state government advised parents to look after their children at home, especially if they sent kids to daycare centers. In Poland, more than 500 homes were reported damaged in wind gusts measuring up to 125 kilometres per hour.

Police said two people died and two were injured after a large crane was toppled by heavy wind at a construction site in the southern city of Krakow.

In the UK, a rare "red weather" alert was issued Thursday and Friday, warning of "danger to life" from severe gusts in southwestern England and south Wales.

In pictures: Germany's most expensive storms

German insurance association GDV has calculated the cost of Germany's fiercest storms since 2002.

At least four people have been killed as severe storms lash central Europe. Wind gusts of up to 181 kilometers per hour are being reported. Gales battering northern Germany have created chaos for transportation and knocked out power supplies.

Tornadoes and extreme weather killed one person and left behind a trail of destruction in western Germany. Dozens were injured in Paderborn, located in the most populous German state of North Rhine-Westphalia.

"Ylenia" was one of three storms which made their presence felt across Germany. Train services and flights were cancelled and schools shut. At least three people were killed.