In an exclusive interview with DW, NATO Secretary-General Jens Stoltenberg said that the US presence in Europe is vital to global security, and called for more German leadership in the alliance.

In an exclusive interview with DW, NATO chief Jens Stoltenberg touted the importance of German leadership in the alliance, following US President Donald Trump's controversial move to announce the withdrawal of 9,500 troops from Germany.

The move, which was criticized by German ministers including Defense Minister Annegret Kramp-Karrenbauer and Foreign Minister Heiko Maas, would see the number of US troops in Germany reduced to 25,000.

Upon announcing the plan, Trump claimed that Germany had failed to meet NATO's defense spending target, and accused the country of being "delinquent."

In the interview, Stoltenberg expands upon why he believes cooperation between NATO members is essential to global peace and security, and Germany's relevance as Europe's largest economy.

DW: What are the biggest security threats to emerge in this pandemic?

Jens Stoltenberg: So what you've seen during the pandemic is that the security threats and challenges we had before the pandemic, they are still there, the terrorist threats, the consequences of the rise of China, a more assertive Russia with the aggressive actions against Ukraine or just the fact that we also see new cyber threats, all of these threats are still there.

If anything, they'll just become even more challenging during the pandemic. And therefore, we need to continue to invest in our security and we need to make sure that we are not choosing either between security threats or health threats. We need to be able to deal with both of them at the same time.

Okay, so there's no question there that a strong NATO is needed at this time. And that's something that you're saying. But is this being undermined by internal squabbling and what looks like the pursuit of self-interest by some allies? 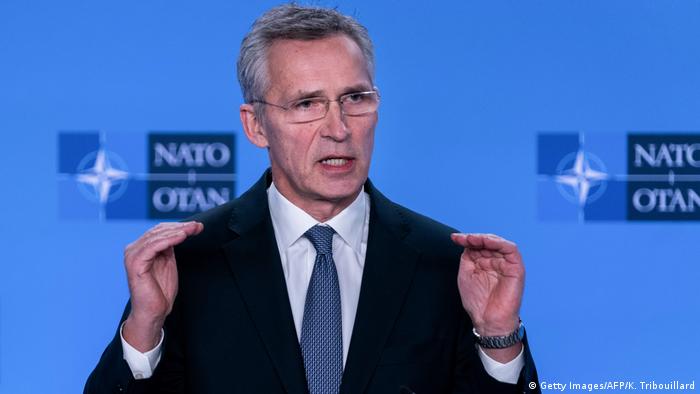 Stoltenberg said the world needed Germany to come to the fore

And the main reason for doing that is not to provoke a conflict. But this is to prevent war, prevent conflict. So as long as we stand together, all our lives are safe and secure, and we preserve peace.

Read more:Berlin says Washington benefits from US troops in Germany

Mr. Stoltenberg, you talk about provoking there. Just last week we were listening to the president of the United States calling Germany delinquent because it's not meeting its defense spending target. Is that a word that you would use? Would you say the Germans are being delinquent?

I value Germany as a very strong and important ally. And Germany is now actually investing significantly more in defense. Germany has added 40% to their defense budget over the last years. And Germany has plans in place to increase it by 80% over a decade. That is significant.

And it also helps to the total NATO defense spending, which has increased by a hundred and thirty billion dollars over the last four years. Germany also plays a key role by leading for instance the battlegroups in the Baltic countries, in Lithuania, and Germany was a lead nation in Afghanistan. Then, of course, we expect Germany to do even more. And expect all allies to make good on their pledge to invest 2% of GDP on that.

The US, Mr. Stoltenberg, is of course, making good on its threats to pull troops from Germany. Today, members of Congress have actually appealed to the president of the United States to reconsider that decision. They say that moving troops out of Germany would play into the hands of Russia and China. Do you agree with that?

I spoke with President Trump before he made the announcement of his intention of reducing the number of US troops in Germany by 9,500 troops. What I told the president is that US presence in Europe is important for NATO. It's important for Europe, but it's also important for the United States.

Peace and stability in Europe adds to the security of North America. And we also have to remember that the US presence in Germany and Europe, it's not only about protecting Europe, but also about projecting power of the United States beyond Europe, into the Middle East, into Africa and Afghanistan and elsewhere.

So I strongly believe that we should be together, stand together. And we had a NATO defense ministerial meeting last week and Secretary [of Defense] Esper of the United States made it clear that no final decision has been taken when it comes to the timelines and the implementation of the plans of the president. And that the United States will consult with our allies on the way forward, and also that the United States stays committed to European security.

Right. I appreciate that, Mr. Stoltenberg. But from where you're sitting, is it best that those troops remain in Germany?

Well, it's a bilateral arrangement between the United States and Germany. What we have seen over the last year was actually that the United States has increased their presence in Europe with more troops, more exercises, more prepositioned equipment. Now, the president has announced a reduction.

I think it's important that we now consult on their way forward and that we also make sure that the US stays committed. And that's also what the secretary said very clearly at the NATO defense ministerial meeting last week.

The interview was conducted by DW correspondent Christine Mhundwa.