Still a danger, US judge rules 'El Chapo' must remain in solitary confinement

A judge has rejected requests to ease the drug lord's prison conditions, saying he still poses a threat. Human rights groups have accused authorities of undermining constitutional rights in their treatment of "El Chapo." 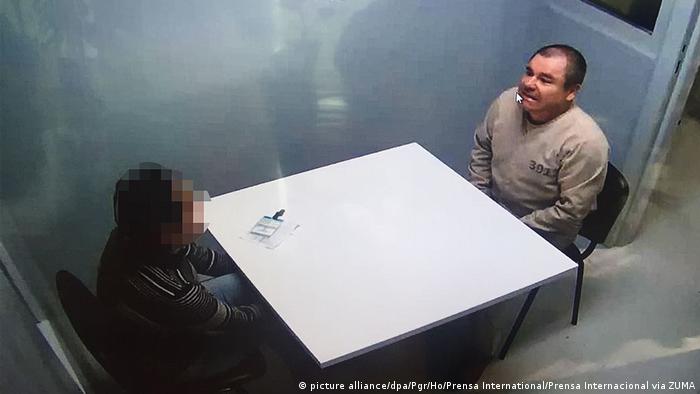 A US judge on Thursday ruled that Mexico's infamous drug lord Joaquin "El Chapo" Guzman must remain in solitary confinement at a high-security New York City to keep him from attempting to control his nacrotics-trafficking empire.

In a written statement, US District Judge Brian Cogan in Brooklyn said that confinement is necessary "to ensure that the defendant cannot coordinate an escape from prison, direct any violence against cooperators or manage any aspect of the Sinaloa cartel's enterprise."

Guzman, who was extradited to the US in January, stands accused of leading Mexico's notorious Sinaloa cartel known for major cross-border drug-trafficking operations and violent attacks against rivals and security forces.

He has denied allegations that he led a multibillion-dollar international drug trafficking operation that involved brutal assassinations and kidnappings.

Since arriving to the US, Guzman has been locked up for 23 hours per days in a 6-by-3.7-meter (20-by-12-foot) cell in Manhattan, which had previously held mafia boss John Gotti  and close associates of former al-Qaeda chief Osama bin Laden.

However, Cogan said he is allowed to write to his wife about hiring lawyers and personal matters, although the communication will continue to be screened by federal authorities.

Human rights group have criticized Guzman's prison conditions, saying it undermines rights enshrined in the constitution and may amount to inhumane treatment.

US authorities have kept a tight least on Guzman most notably for his ability to escape two high-security prisons Mexico, one of them through a complex tunnel built directly under the shower in his cell.