'El Chapo' could be returned to prison he escaped from

A lawyer for Joaquin "El Chapo" Guzman says the drug lord could be returned to a maximum-security prison from which he has already escaped once. Guzman's son was kidnapped earlier this week. 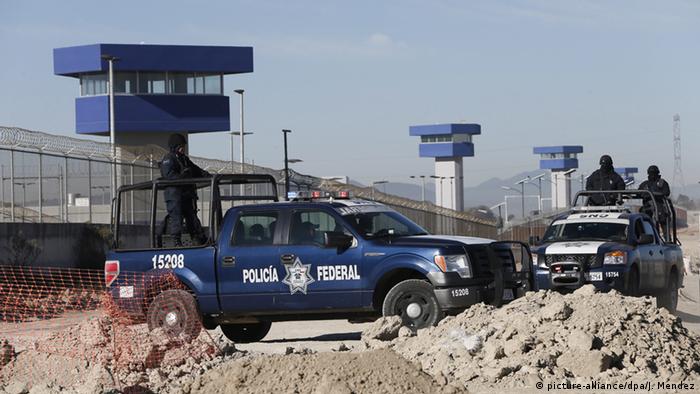 A judge's decision could return Joaquin "Shorty" Guzman to the maximum-security prison from which he escaped in 2015, the narco kingpin's legal team announced. Officials had transferred "El Chapo" to Chihuahua while fortifying the Altiplano prison near Mexico City after recapturing him in January.

Guzman's lawyers successfully argued that holding the drug lord near the border had made it difficult for them to remain in contact with their client. They had not spoken with him since last Thursday, lawyer Jose Refugio Rodriguez said late Wednesday.

In July 2015, Guzman drove a motorcycle through a 1.5-kilometer (1-mile) tunnel from his cell in Altiplano to a pickup point in an unused house. For six months in Sinaloa, he received guests such as aUS actor Sean Penn, who wrote a lengthy article praising the drug lord's hospitality.

Guzman is a conflicting figure in Sinaloa, where his cartel provided social services and security to neglected populations - and with only marginally more brutality than that employed by police and soldiers. Chapo has become the protagonist of folks ballads known as "narcocorridos," which often invert the traditional good guy-bad guy narrative.

More than 166,000 people have died and 27,000 have disappeared since 2006, when President Felipe Calderon declared a war on drugs and his successor, the neoliberal Enrique Pena Nieto, more or less took the baton in 2012. Cartels have battled one another and government troops in their efforts to move their goods north, across the US border. Many of the guns used by Mexico's cartels are brought illegally from the United States.

The Jalisco New Generation Cartel (CJNG) has kidnapped Jesus Alfredo Guzman Salazar, one of El Chapo's sons and a co-leader of the Sinaloa cartel alongside his brother Ivan Archivaldo Guzman, better known as "El Chapito," or "Little Shorty." Formerly allied with the Guzmans' cartel, the CJNG emerged six years ago in Jalisco, two states south of Sinaloa, and has since gone to war with Chapo's gang, perhaps emboldened by the drug lord's arrest. Officials said no ransom request had been made.

"Our investigation quickly identified some of those who perpetrated this action, and their links confirm that they are part of this criminal group," Jalisco state prosecutor Eduardo Almaguer said on Tuesday. "We found ammo for one weapon, but, during the investigation of the vehicles, we didn't find any weapons," he told reporters. "None of the diners had or used a weapon."

acknowledging a bout of flatulence

Politicians across the ideological spectrum in Germany have expressed concern over Giorgia Meloni's electoral success. However, the far-right AfD voiced support for Meloni, who looks likely to be Italy's next leader.

The former NSA contractor and whistleblower was previously given permanent residency by the Russian government in 2020.

The currency took a beating from investors after the government announced plans to cut billions in tax revenues. The new Conservative Party government under Prime Minister Liz Truss has been in power for just 20 days.