Two major Mexican drug lords have been arrested recently, however, the biggest prize - Sinaloa boss Joaquin Guzman Loera, known as Chapo - remains the most wanted narco in the world. 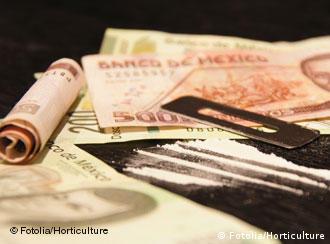 No one's quite sure when he was born - he could be anything between 50 and 58 years old. That's rather long in the tooth for a person in this high-stakes illicit profession, which doesn't tend to retain old timers just to fob them off with retirement gold watches plus a pat on the back.

Much more than just leading a charmed life, Guzman has survived and prospered, due to cunning, ruthlessness, bribery and ingenuity. He's become a billionaire who's been mentioned on Forbes Magazine's Richest and Most Powerful Lists.

One of seven children born poor, in the North Western State of Sinaloa, Guzman reputedly sold oranges as a child, moved on to stealing cars, and then gravitated toward organized crime.

A protégée of Miguel Angel "The Godfather" Felix Gallardo, he took over the leadership of the Sinaloa drug cartel after his mentor's arrest on April 8, 1989. Gallardo has reputedly enjoyed immunity from prosecution, because he supplied the Contras in Nicaragua with weapons and cash.

Mexican Authorities once actually had Guzman under lock and key. Arrested on June 9, 1993 in Guatemala following a tipoff, he was jailed for 20 years after being convicted of drug trafficking, bribery and criminal association charges.

Guzman languished in jail and wasn't able to exert his influence until he was transferred to Puente Grande maximum security prison in the western state of Jalisco. On learning there were well-advanced plans to extradite him to the United States, he bribed his way out of jail, hidden in a laundry basket. Allegedly it took the equivalent of $2.5 million to grease palms.

The Sinaloa cartel is a huge illicit multi-national enterprise, which trafficks multi-ton shipments of Colombian cocaine into the United States. It also sends along heroin, (amapola) marijuana and methamphetamines. The billions of pesos and dollars that this nets are expertly laundered, seeping their way into the economies of many nations.

Mexican forces are facing an uphill battle against the drug cartels

Professor Jorge Chabat is an Investigator in the International Studies Department at CIDE - The Center for Research, Technology and Economics in Mexico City, and specializes in assessing drug cartels.

He says a clue to Guzman's success is his ability to stick to a singular core goal and being prudent.

"Guzman has been very capable of maintaining himself as a leader of this criminal organization. And probably one of the keys of his success, is that he's learned what to do and what not to do. He's not been engaged in kidnapping, extortion and other predatory crimes. He's focused only on drug trafficking, and that's probably a reason he's survived for such a long time. He's learned to bribe the right authorities at the right time. Compared to the Zetas drug cartel he's been wiser, that that's why law and order attention during the past years has been focused on the Zetas. They are more violent criminals than him."

On a Wagnerian evening in Mexico City, punctuated by peals of thunder, flashes of lightning and waves of torrential rain, authors of books about the drug cartels are giving a presentation at the Journalists' Club.

Tough, watchful men are on stage, close at hand, carefully scrutinizing, especially, when it's time for up-close book signings. Since 2000, 173 journalists have paid the supreme price for daring to report about the drug cartels. And that death toll continues to rise. 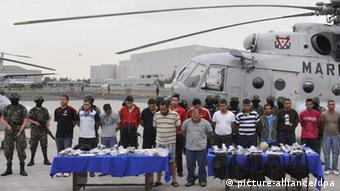 Anabel Hernandez has written a book called: "Los Señores del Narcos." It's due to be published in English under the title: "Narcoland." A photograph of Joaquin Guzman adorns its front cover.

The myth and the man

She stresses that separating the truth from myth isn't easy. "I've been investigating Joaquin Guzman since 2005, so I can confirm that he's everywhere. Most of the things that people say about Guzman are lies. Yet this man is as free as you. He can walk in the street and he can go to a restaurant. He's free because no one wants to catch him."

There is a story that Guzman sauntered into a restaurant, accompanied by a phalanx of heavily armed bodyguards, who prevented diners from leaving, while their boss ate a leisurely lunch. But to make up for all the inconvenience, he paid everyones' bill. Hernandez cites this as a good example of folklore, as she's heard the same story bounced off Guadalajara, Monterrey, Tijuana and a number of other Mexican cities. But it goes to show how the legend gobbles up fact and perpetuates myth.

"Now this man is the most important drug lord in the World. I didn't say that - the DEA says this. I see his business growing, so his power is growing and he's extending his empire into other countries."

Fellow speaker Diego Osorno, author of the book "El Cartel de Sinaloa," describes Guzman as one of the most powerful people in Mexico, whose influence even extends into tourism and the oil business.

Osorno says the popular perception is that the Zetas, whose leadership is made up of ex-Mexican military special forces, are more powerful than Guzman's Sinaloa cartel - a mistaken assumption, says the author. 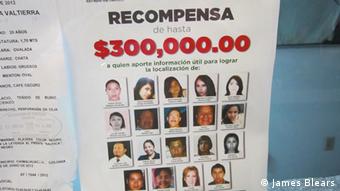 The drug cartels have turned to kidnappings to fund their business

"The Zetas are an emerging group. The previous government converted them into a much larger enemy than they are in reality to justify their political war. They are not really a hindrance to the power of Joaquin Guzman."

Lolita Bosch, a Spanish journalist who's also written about the drug trade, agrees that this double blow to the Zetas might well have provided Guzman with a tactical advantage and even more influence. "He's running his cartel in 12 countries within Latin America. He's laundering money in Europe, selling guns in Africa and keeping drugs in places in India. It's amazing how big he's become. He's had a lifetime of experience, and he's had skilled teachers."

Bosch says that Guzman wants to retire and to do that he needs to vanish, probably after undergoing plastic surgery. But before that there's one final huge challenge, which involves his organization reaching and dominating the triangle of Mexico City, the Federal District and State of Mexico. It's a huge catchment area containing 25 million people.

However Bosch doesn't believe that Guzman, who appears to rather enjoy perpetuating his legend, can ever ride away into the sunset and ensure anonymity for himself and his family. In August 2011, his third wife, Emma Coronel Aispuro, who's a US citizen by birth and has never been charged with any crime, gave birth to their twin girls in Los Angeles County Hospital, before returning to Mexico.

Despite repeated requests by DW via phone calls and emails over a three-week period, the Mexican Attorney General's Office didn't respond to a request to provide a nominated person for an interview about Guzman. As a senior government spokesman put it: "Perhaps they haven't got anything to say?"

For Diego Osorno the case is simple. "We're dealing with a world of shadows," he said.

Mexican officials say they have captured the leader of an organized drug ring known as the Gulf cartel. The arrest is the latest coup for the government, which has vowed a crackdown on the drug gangs. (18.08.2013)

US President Barack Obama's trip to Mexico comes at a time when a number of crucial issues are playing a major role in shaping the respective countries' policies - from immigration to the drug war and gun control. (01.05.2013)