The timing of Guzman's extradition surprised many, including his lawyer who said four appeals remained outstanding. One source said Mexico extradited him while Obama was president, in order to send a message to Trump. 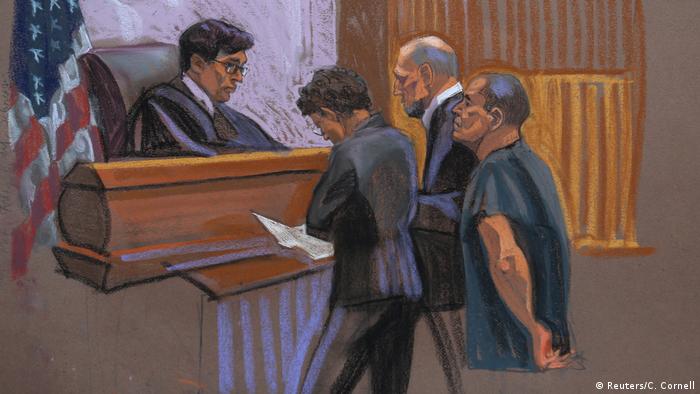 Joaquin "El Chapo" Guzman, a man accused of running the world's largest drug-trafficking organization pleaded not guilty appeared in a US federal court in Brooklyn Friday.

No bail was sought, and he answered questions through an interpreter even though he said he understood the judge's English.

His court appearance came just one day after his surprise extradition from Mexico.

The charges stemming from the 17-count indictment carry a mandatory minimum sentence of life in prison, said Robert Capers, US attorney for the Eastern District of New York.

"Who is Chapo Guzman? In short, he's a man known for no other life but a life of crime, violence, death and destruction, and now he'll have to answer to that," Capers told journalists.

Guzman, 59, arrived at Long Island's MacArthur Airport Thursday night after being taken from prison in the city of Juarez, in the northern state of Chihuahua, where his Sinaloa cartel rules.

Earlier Thursday he was bundled out of his Mexican prison cell block with his hands cuffed above his head, as shown on Mexican television.

Guzman is accused of money laundering, drug trafficking, kidnapping and murder in several cities, including Chicago, Miami and New York.

Federal prosecutors have more than 40 witnesses ready to testify against Guzman, adding that the trial will likely last "many" weeks, Capers told reporters.

US prosecutors assured Mexican officials that El Chapo (Spanish for "Shorty") would not be executed in order to secure his extradition, Capers said. Mexico opposes capital punishment.

One of Guzman's lawyers was surprised at the extradition, saying that four appeals in Mexico were outstanding to stop it.

Michael Vigil, the former head of international operations for the US Drug Enforcement Administration said the timing was no coincidence.

"The Mexican government decided to move up the time frame because they didn't want Trump to be in the presidency when they sent him over," he said. "They wanted Obama to take credit. They wanted to send a message to Trump that they won't be bullied."

Leading the Sinaloa cartel, El Chapo oversaw what is arguably the world's largest transnational drug smuggling operation, which includes cocaine, heroin and methamphetamines. The alleged kingpin played a key role in Mexico's decade-long drug war that has killed over 100,000 people.

"Guzman and the Sinaloa cartel had a veritable army, ready to war with competitors and anyone Guzman deemed to be a traitor," US prosecutors said. He was known to carry a gold-plated AK-47 rifle.

He was captured a year ago after he had fled a high-security prison in Mexico via a mile-long tunnel, his second dramatic prison escape.

US officials, citing security concerns, refused to say where El Chapo will be held while awaiting trial, but they vowed to prevent any further escapes.

"I assure you, no tunnel will be built leading to his bathroom," said Special Agent In Charge Angel Melendez of US Homeland Security Investigations.