Police have found 15 bodies after militants opened fire and set off explosions during a sweep on a suspected Islamist hideout. Authorities are scrambling to track down suspects tied to the deadly Easter Sunday bombings. 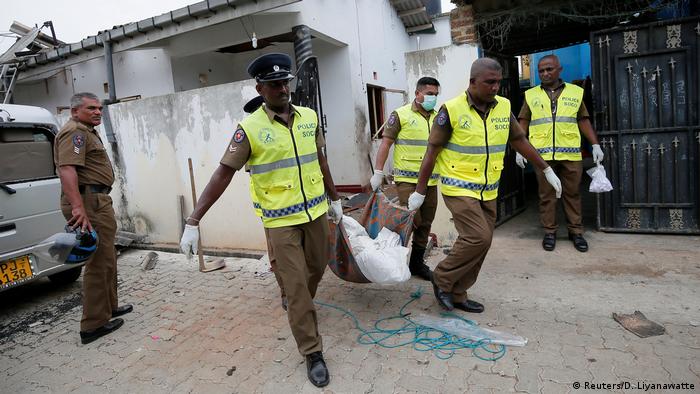 The bodies of 15 people, including six children, have been found following a raid on a house linked to suspected Islamist militants, Sri Lankan police said Saturday.

Three explosions went off Friday night as police commandos, backed by the army, engaged in a gun battle at a suspected militant hideout in Sainthamaruthu, 360 kilometers (224 miles) east of the capital, Colombo, police said.

The militants were believed to be linked with last weekend's spate of deadly Easter bombings, which killed 253 people.

Police said that one or more suicide bombers detonated devices as security forces attempted to storm the house.

"We have searched the place and found 15 bodies, of which 12 of them were inside the house and three outside," police spokesman Ruwan Gunasekara said. Three of the dead were women and six were children.

The military said a civilian also died after getting caught in the crossfire, while a critically injured woman and girl were taken to hospital.

At least three of the dead were suspected members of the National Towheed Jama'at (NTJ), which has been blamed for last Sunday's attacks on churches and luxury hotels.

NTJ and another group, Jamathei Millathu Ibrahim, were banned under emergency powers, President Maithripala Sirisena said in a statement on Saturday. Authorities said they could not ban the two little-known groups earlier because the law required strong evidence against them.

The government has said nine homegrown, well-educated suicide bombers were behind the Easter explosions. Police have identified eight of those individuals. They've also arrested more than 70 people in their investigations so far — 20 of them in the past 24 hours, police said.

Fears there could be more attacks prompted the government to deploy thousands of soldiers across the island to guard religious buildings and carry out searches.

A "major search operation has been undertaken," Sirisena said. "Every household in the country will be checked."

A number of countries updated their travel advice for Sri Lanka in the wake of the attacks. The German Foreign Office advised citizens to avoid nonessential trips to Colombo and the rest of the island, and urged travelers there to be vigilant. The US and UK have issued similar warnings.

Friday's shootout took place in a predominantly Muslim area under indefinite curfew. It came hours after security forces raided a nearby property where they believe the attackers recorded a video pledge to "Islamic State" (IS) leader Abu Bakr Al-Baghdadi before carrying out the Easter bombings.

Police said they seized dozens of sticks of dynamite, an IS flag and uniforms similar to those worn by the eight fighters who appeared in the video, which was released two days after the attacks.

IS has claimed responsibility for the carnage but has provided no evidence to back up its claim.

The persecution of Christians across the world is on the rise, just like the politicization of religion. But in the wake of the terror attacks in Sri Lanka, experts are warning against proclaiming a war between faiths. (24.04.2019)