The search for suspects tied to the deadly Easter bombings in Sri Lanka has intensified amid concerns about possible further attacks. Officials said some 100 fewer people died in the attack than previously announced. 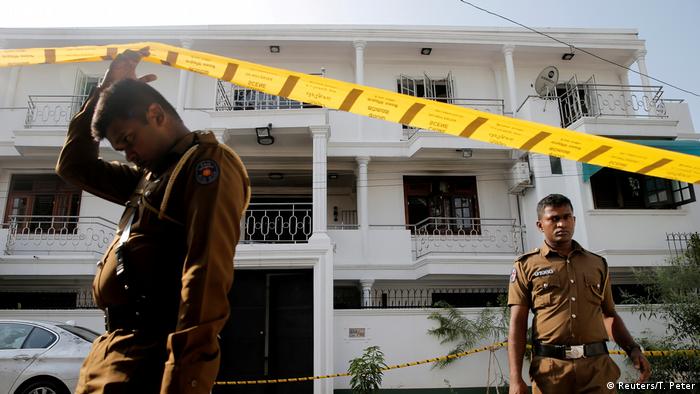 Sri Lankan officials lowered the death toll in the Easter Sunday attack down to 253 from the previous figure of 359, officials said on Thursday.

The country's Health Ministry said that the state of the bodies made it difficult to give a precise figure and that some bodies had been double-counted.

Around 500 other people were injured in suicide bombings that targeted three churches and three luxury hotels on Sunday.

Most of the victims were Sri Lankan and from the nation's Christian minority. At least 38 foreigners were also killed, including 10 Indians, eight UK nationals, four Americans, and three children of the Danish billionaire Anders Holch Povlsen.

Authorities intensified the hunt for suspects possibly linked to the bombings on Thursday, releasing the names of three men and three women wanted for questioning.

Some of the suspects "may go out for a suicide attack," Prime Minister Ranil Wickremesinghe said in an interview with The
Associated Press, stressing that they may well be carrying explosives.

So far, 76 people have been detained in connection with the attack. On Tuesday, the militant group "Islamic State" claimed responsibility for the blasts, although initial investigations indicate a domestic Islamist group, National Thowfeek Jamaath, was behind the attack.

Sri Lanka's Defense Secretary Hemasiri Fernando also resigned from his post on Thursday, although he denied that there had been any failure on his part.

Sri Lankan authorities have been accused of failing to take action on intelligence reports about the attacks that were received in advance.

The British government warned its citizens to avoid all non-essential travel to Sri Lanka amid the ongoing security operation and concerns about possible further attacks.

The US Embassy in Sri Lanka also tweeted a warning, advising people to avoid places of worship over the weekend.

"Sri Lankan authorities are reporting that additional attacks may occur targeting places of worship," the US Embassy wrote on Twitter.

Security has intensified around mosques across in the country ahead of Friday prayers, with members of Sri Lanka's Muslim minority fearing a possible backlash to the attacks.

The suicide bombings on Sunday have rocked the Buddhist-majority island nation, with its 22 million population including minority Christian, Muslim and Hindu communities.

Ahmadi Muslims, many of whom fled persecution in Pakistan, have reported being harassed and threatened following the Sunday bombings. Hundreds of Ahmadi Muslims have since fled the Negombo region on Sri Lanka's west coast.

Prime Minister Ranil Wickremesinghe acknowledged the attacks against the Ahmadi Muslim community in an interview with the Associated Press. He added that authorities will work to ensure their safety.

How did Islamist terrorism take hold in Sri Lanka?

How active are Islamist groups in Sri Lanka? Could they have launched multiple, well-coordinated terrorist attacks in different parts of the country without the support of global jihadi organizations? (22.04.2019)

After the tragedy, Sri Lankan tourism braces for impact

More than 350 people lost their lives in terrorist attacks in Sri Lanka on Sunday. The attacks struck at the heart of the country's vibrant tourism industry, a sector of importance to the country’s fragile economy. (24.04.2019)