Sri Lanka's government reports that a domestic terror cell was behind the series of bomb attacks that killed nearly 300 on Easter. The military have been given sweeping wartime powers to arrest and detain suspects. 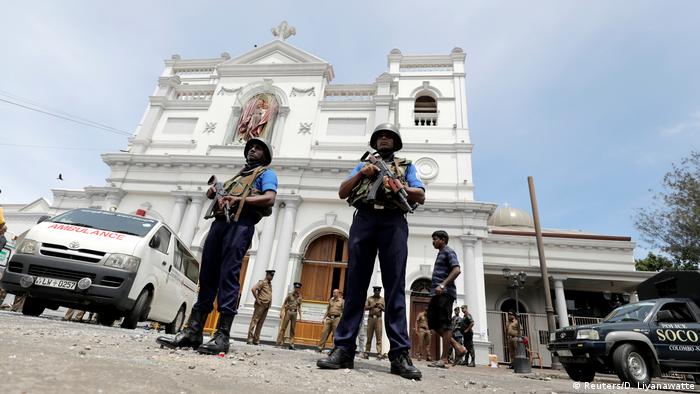 On Monday, Sri Lankan officials said an Islamist militant group called National Thowfeek Jamaath had carried out multiple suicide bomb attacks on Easter in which at least 290 people died and 500 were injured.

Health Minister Rajitha Senaratne told a news conference that all the bombers were Sri Lankan citizens, but that the group likely had foreign links as the attacks seemed too sophisticated to have been carried out without "international support."

Officials said 24 suspects were now in custody for questioning in connection with the attacks.

A government forensic crime investigator said an examination of the attackers' body parts showed that they were suicide bombers. 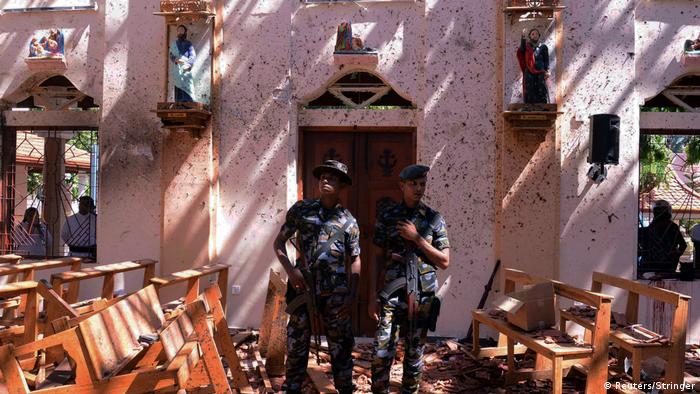 St Anthony's church after the bombing

The attacks, which targeted Christian churches and hotels popular with foreigners, amounted to the deadliest violence to hit Sri Lanka since a civil war ended 10 years ago. More than 500 people were injured in the blasts.

Also on Monday, a police spokesman said that 87 bomb detonators had been found at the main bus station in the capital, Colombo, and a nearby garbage dump. Earlier, police said that they had defused an improvised bomb at the international airport in Colombo.

Sri Lankan authorities have also ordered a state of emergency to be imposed from midnight on Monday, the president's office said.

President Maithripala Sirisena's office announced late Monday that from midnight the military would be given sweeping wartime powers to arrest and detain suspects. A curfew in Colombo is to run from 8 p.m. (1430 UTC) Monday to 4 a.m. on Tuesday, which has been declared a day of national mourning.

The military had been granted police powers during the civil war, which ended in 2009, but these were later withdrawn.

Officials said they would look into possible intelligence failures following reports that security services had ignored warnings of an imminent attack on churches. Sirisena is also to meet with foreign diplomats to seek international assistance following reports from intelligence agencies that "international groups" were involved with the bombings.

Sri Lanka's minister of tourism, John Amaratunga, said 39 foreign tourists were killed and 28 injured in Sunday's attacks. Previous reports said citizens from the United States, Japan, Australia and India were among those to die in the blasts. US Secretary of State Mike Pompeo confirmed on Monday that some of the victims were US nationals.

A German-US dual national was among the victims, the Foreign Ministry in Berlin announced on Monday. "So far as we know, there are no other German nationals among the victims," a spokeswoman said, as she expressed deepest sympathy for those injured or killed in the attack.

The attacks have raised fears of a resurgence of the communal violence that has often plagued the island. Police reported late on Sunday that a mosque in the northwest had suffered a petrol-bomb attack and that two Muslim-owned shops in the west were targeted by arsonists.

"On behalf of the Sri Lankan Muslim community, we offer our condolences to the people of Christian faith and extend our hands of friendship in solidarity," said the All Ceylon Jamiyyathul Ulama, or council of Muslim theologians.

Sri Lankan authorities blocked Facebook and its WhatsApp and Instagram services on Monday, citing the spread of "false news reports" on the platforms regarding the attacks.

Authorities said the blackout would continue until an investigation into the blasts was concluded.

The NetBlocks observatory also reported an intentional blackout of other platforms, including YouTube, Snapchat and Viber. Twitter, however, was not affected.

Sri Lanka's government imposed a weeklong social media ban in March 2018 out of concern that WhatsApp and other platforms were being used to fan anti-Muslim violence in the country's central region.

With the defeat of Tamil separatists in 2009, Sri Lanka had somewhat managed to rein in violence. But experts say that various conflicts continued to plague the country, and these could have triggered the Easter blasts. (21.04.2019)