Sri Lankan Islamic militant leader Zahran Hashim was apparently killed in one of the suicide attacks on Easter, President Sirisena said. Police are now hunting for some 140 people with suspected "Islamic State" ties. 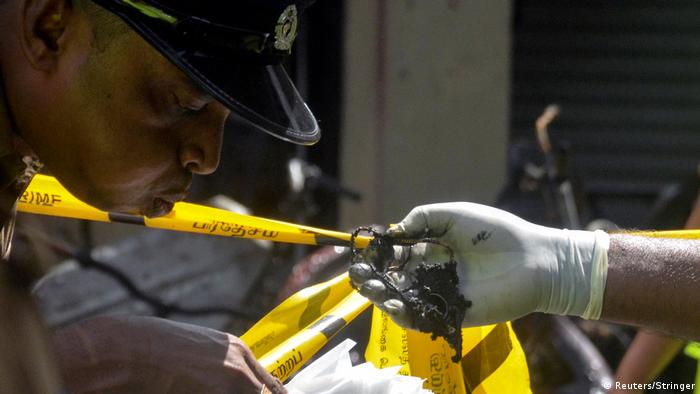 Security forces in Sri Lanka are looking for around 140 people believed to have links with the "Islamic State" (IS) militia over the Easter attacks, President Maithripala Sirisena said on Friday.

In the days following the church and hotel blasts, the government said local militants from the National Thowfeek Jamaath (NTJ) were behind the bombings, likely with help from abroad. Later, a video surfaced with the NTJ leader pledging his allegiance to IS. The attacks launched a nationwide manhunt for Hashim.

On Friday, President Sirisena said the NTJ leader died in one of the six deadly blast while taking part in the attack on the luxury Shangri-la hotel in the capital, Colombo.

"What intelligence agencies have told me is that Zahran was killed during the Shangri-La attack," Sirisena said.

In his address, Sirisena also said the government — led by his rival Prime Minister Ranil Wickremesinghe— should take responsibility for mistakes that allowed the deadly attacks on churches and hotels on Easter to take place.

According to Sirisena, the government had weakened the country's defenses by prosecuting military intelligence officials after the end of Sri Lanka's brutal civil war against the Tamil Tigers. The insurgency suffered a resounding defeat in 2009.

The president also said that he had met his defense secretary and police chief in mid-April. At the time, the security officials had reports from "friendly nations" that an attack was being prepared, but they allegedly failed to share this information with Sirisena.

The president said the country's police chief was about to resign.

Sirisana's remarks come a day after Sri Lankan authorities lowered the death toll of from the blast from 359 to 253.

While talking to reporters, Sirisena also urged the nation to view their Muslim minority as terrorists, and said that the authorities were able to "completely control" IS activities in the country.

Sri Lankan authorities have deployed some 10,000 troops across the island nation to search for suspects and provide security for religious temples, the country's military said.

Separately, officials and Muslim leaders urged Sri Lankan Muslims to pray at home this Friday for fear of retaliatory violence. Ahmadi Muslim refugees from Pakistan have already faced attacks in the Buddhist-majority country in the wake of the attacks.

Christians were also worried about going back to their places of worship after three churches were attacked with bombs. On Friday, Australian officials warned that new terror attacks were "likely" in Sri Lanka.

"Attacks could be indiscriminate, including in places visited by foreigners," they said in a travel advisory to their citizens.