The Social Democrats won the election, but find themselves in an uncomfortable situation. Whether Olaf Scholz will become chancellor depends on the Greens and Free Democrats. How is the SPD dealing with the suspense? 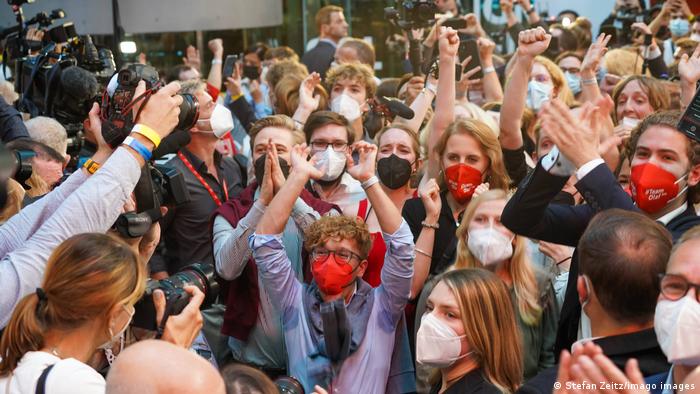 It was a question intended to provoke: Was it acceptable to the center-left Social Democrats (SPD), as the party with the most votes, to be sitting on the sidelines, watching and waiting while the Greens and the pro-free market Free Democrats (FDP) decide who they want to form a coalition with after Germany's election?

It was asked of SPD co-chairwoman Saskia Esken in a TV interview the morning after voting day. The SPD had won the election, but its main rival, the conservative Union bloc (of the center-right Christian Democrats, CDU, and their Bavarian sister party the Christian Social Union, CSU) could, and gladly would form a coalition government with the two smaller parties. 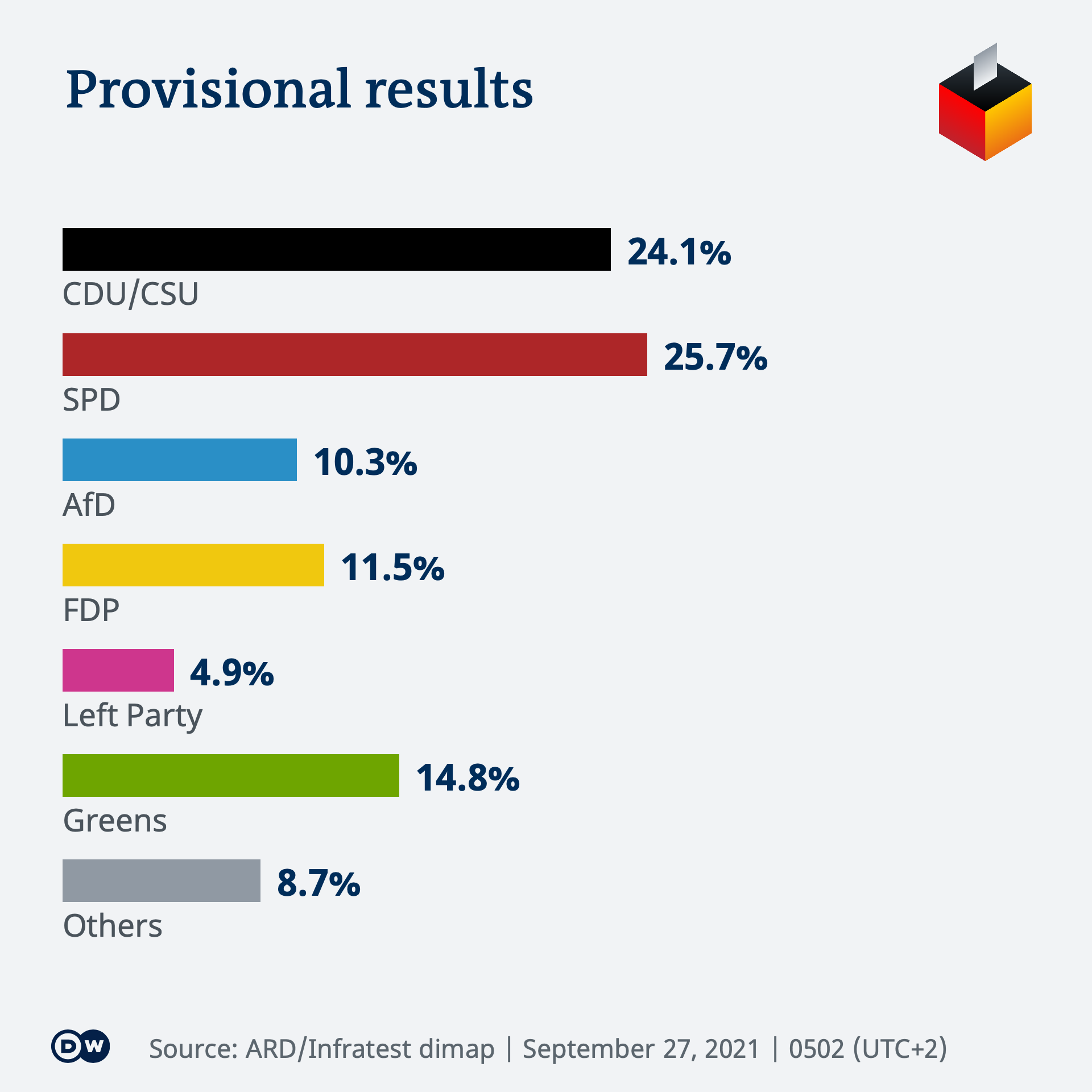 It was clear to see that Esken was irritated, even as she gave her answer with a smile. She finds it "astonishing, how one could think of choosing such a blatant election loser as chancellor," she said of the potential coalition partners, emphasizing that the SPD would of course not just be sitting back and watching but making appointments for talks with the Greens and FDP.

A couple of hours later, after a meeting of the SPD's executive committee, Olaf Scholz gave a more careful answer. "First of all, it is totally fine if those we want to work together with talk among themselves," the SPD chancellor candidate said in Berlin.

Scholz: 'We can derive a mandate to build a government'

But he also made his feelings clear: The election result gave the SPD a mandate "to endeavor to form a government," he stressed, thereby suggesting that a coalition against the SPD would be disregarding the will of the voters. He also wooed the Greens and FDP, saying that they, too, were winners in the election and have their own "narrative of progress for a modern society" to offer.

"If three parties that embrace progress ... can constructively join forces to bring it about, then it can be a good thing even if they have different starting points," he said.

The SPD is prepared. Six politicians will lead the talks with the Greens and the FDP: Scholz, chairpersons Saskia Esken and Norbert Walter-Borjans, general secretary Lars Klingbeil, parliamentary leader Rolf Mützenich and the state premier of Rhineland-Palatinate, Malu Dreyer. 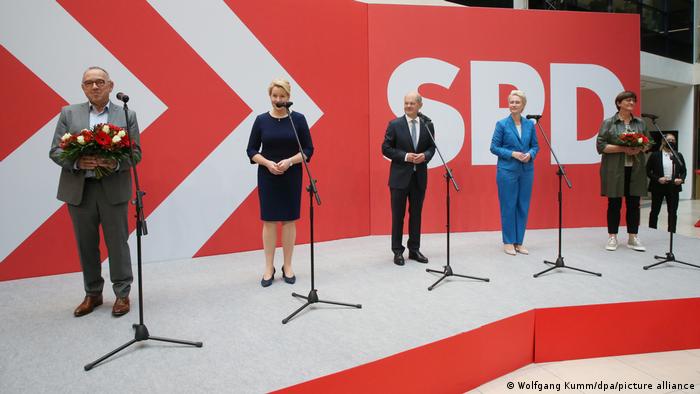 Forming a social-environmental-liberal coalition is the task that is now pending, said Scholz, while looking to history and "the very successful social-liberal coalition between 1969 to 1982" and the "very good period of government with the Greens," from 1998 until 2005. "There are good traditions which we can draw from."

Is that enough to convince those being courted and remove doubts about the viability of a so-called traffic light coalition [named for the party colors of SPD red, FDP yellow and Green]?

It remains to be seen how the SPD will position itself in the coalition talks. What policy concessions would the Social Democrats be willing to make, where would their red lines be? For now, these questions remain unanswered. "I do not believe — and we have all agreed — that now is the time to be discussing individual points," said Scholz. The SPD will do that "with the friends we want to govern with." 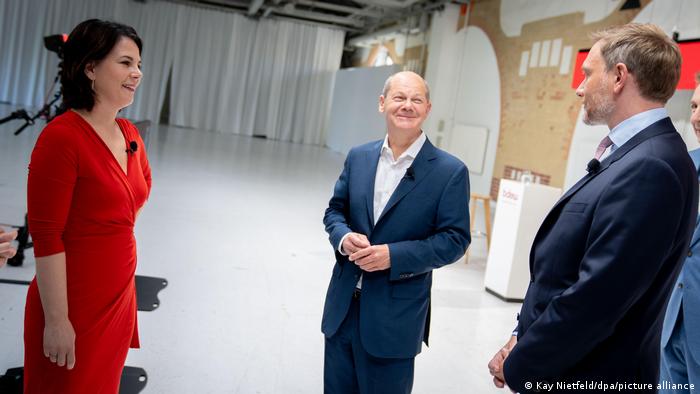 Annalena Baerbock (left, of the Greens), Scholz and Christian Lindner (right, of the FDP) may soon be sitting down for talks

That sounds very familiar, and it should. "The governing parties need to trust each other; they must want to work together and not go behind the others' backs, saying what they are doing badly," Scholz said, citing the FDP's bad experiences with the CDU and CSU in this regard.

'We succeed when we act in unity'

Scholz is also relying on trust within his own party. He is convinced that the unity shown during the election campaign, the "joint management," will continue to "work well" in the future. Nevertheless, it wouldn't be surprising if he had his doubts, especially when it comes to the left-leaning wing of the party, which has long worked to move the party significantly further to the left. This development culminated in 2019 when the left-wing duo of Esken and Walter-Borjans defeated Scholz in the battle for the SPD chairmanship.

In a coalition of SPD, FDP and Greens, a left-wing SPD chairperson and a left-wing SPD parliamentary group could be a strong counterbalance, especially to the FDP with its middle-class liberal positions.

Can Scholz, who has always belonged to the SPD's conservative wing, pull off this balancing act? Or will the SPD sooner or later relapse back to its traditional infighting? For his part, Scholz expects his party has learned from its mistakes.

"The SPD has experienced that we succeed when we act in unity, as we do now," he said during the election campaign. "The party will not forget this experience."

It's time to take a fresh look at the man who revived the SPD. Often likened to a robot, he has never really been popular within his own party. But now he might head the next German government.