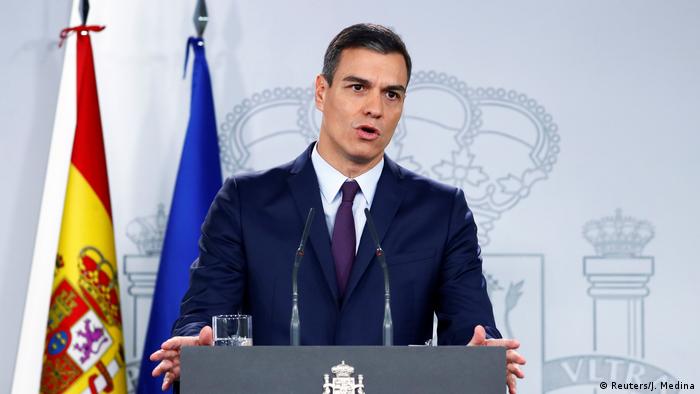 "Spain needs to keep advancing, progressing with tolerance, respect, moderation and common sense," Sanchez told Spaniards in a television address. "I have proposed to dissolve parliament and call elections for April 28," the prime minister said.

The elections will be the third parliamentary vote in Spain in a three-and-a-half year period and will take place roughly one month before EU parliamentary elections are held.

"During these eight months, we have heard things that are very dangerous," Sanchez said of the current political discourse in Spain.

The socialist leader denounced the conservative opposition as obstructionist and decried right-wing accusations that he was an "illegitimate" head of government.

To be approved, Sanchez's budget had hinged on the support of two separatist Catalan parties, who demanded that Spain recognize the region's right to self-determination in exchange for their vote.

The ruling socialist party ultimately rejected their demands and the budget was defeated.

"You may call me traditional, but one cannot govern without a budget," Sanchez conceded to reporters on Friday.

Sanchez has led Spain for merely eight months, after his predecessor Mariano Rajoy of the conservative party was ousted in a dramatic parliamentary no-confidence vote.

Opinion polls project that Sanchez could obtain a large share of the vote, but the socialists would be unable to form a majority in parliament, even with the support of Podemos.

The conservative parties PP, Ciudadanos and far-right Vox, which has seen a surge in support recently, could be able to form a majority together. Such a union has already been formed in regional parliament of Andalusia, after local elections took place there in December.

The leader of PP, Pablo Casado, said on Friday that the new election announcement was a victory for his party, adding that conservatives were the political force that pushed Sanchez to "throw in the towel."

Albert Rivera, leader of Ciudadanos, also welcomed the new vote and hinted at a possible partnership with PP in a coalition, though he stopped short of embracing Vox. What is at stake in the upcoming election, Rivera said, is either "part two of a Frankenstein government or a constitutionalist one."

Thousands of supporters of Spain's right-wing opposition have rallied in Madrid to demand the resignation of Prime Minister Pedro Sanchez. Many are furious his government is negotiating with Catalonian separatists. (10.02.2019)