Spain: Will a snap election spell the end for Pedro Sanchez? | Europe| News and current affairs from around the continent | DW | 14.02.2019

Spain: Will a snap election spell the end for Pedro Sanchez?

The failure to pass a budget vote was the last nail in the coffin of the prime minister's term, marked by bitter confrontation with right-wing parties and Catalan separatists. Santiago Saez reports from Madrid. The parliamentary session to pass a budget law for 2019 was supposed to be a mere formality. But last week, negotiations broke down with the Catalan separatist parties PdeCat and ERC, whose support had been key for Sanchez's bid to become prime minister last year. The pro-independence parties demanded that in exchange for budget support, the government should recognize the region's right to self-determination. But that was a red line the government wasn't prepared to cross.

The crucial budget vote was, thus, essentially dead on its feet. Sanchez, who heads the Socialist PSOE, tried to nominate a rapporteur, but that effort was rejected by pro-independence MPs, who had previously handed the national cabinet a list of 21 demands. These included the right to self-determination, the presence of international mediators, and the end of the trial against Catalan separatist leaders.

Pedro Sanchez threw out the document, however right-wing parties used it to accuse Sanchez of treason for allegedly giving in to some of Catalan leader Quim Torra's conditions. 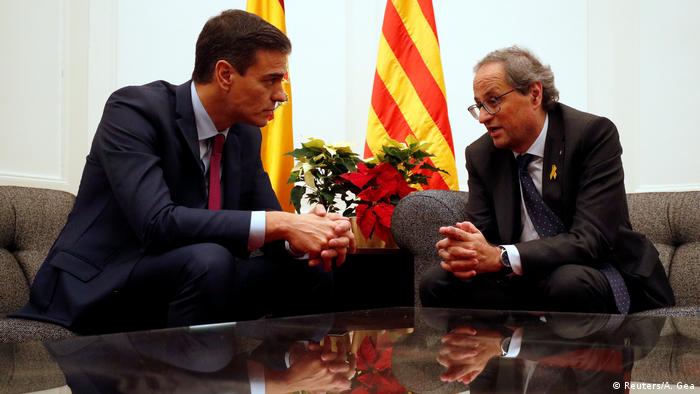 An election for Sanchez to lose?

Now the PSOE leader has called a snap election for April 28, although technically he was not obliged to do so. By law, he could have rolled out last year's budget again and continued governing. Currently the polls show an advantage for right-wing parties, whose followers have been galvanized after a historical win in Andalusia, the most populated region of the country and a socialist stronghold for four decades.

According to a poll aggregate published on the El Pais website, PSOE currently heads the polls with around 24 percent. The Conservative PP are at 21 percent, with the liberal Ciudadanos following closely at 18 percent. The left-wing Podemos party continues to lose steam after months of internal strife and currently sits at 15 percent. Meanwhile the far-right Vox, which made inroads in the recent elections in Andalusia, would attract around 10 percent of the vote.

The rise of Vox, a party advised by former Trump strategist Steve Bannon, has fragmented the conservatives, but also sparked enthusiasm among voters who are against any kind of dialogue with Catalan separatist supporters. At the moment, surveys point to a victory for a triple alliance between PP, Ciudadanos and Vox.

However, there are a number of reasons for Sanchez to call an election now. One of them, according to Pablo Simon, a political scientist and editor at Politikon, is precisely the fact that his rivals now appear united. "Sanchez needs PP, Ciudadanos or Vox to appear as a homogeneous block, with himself on the other side." Regional and local elections scheduled for May 26 may produce alliances between PSOE and Ciudadanos, which would throw a spanner in the works of his plan.

"If the right-wing alliance doesn't obtain an outright majority of 176 seats [of the 350 seats available], Sanchez wins, because there would be another election and in the meantime he could sound out other ways to form a government," said Simon, referring to the unlikelihood that other parties would support any coalition that includes Vox. The way things stand Sanchez won't command a majority, short of the Catalans changing their mind, which would mean further deadlock, prompting yet another election.

Read more: Opinion: Spain and Catalonia have a communication problem 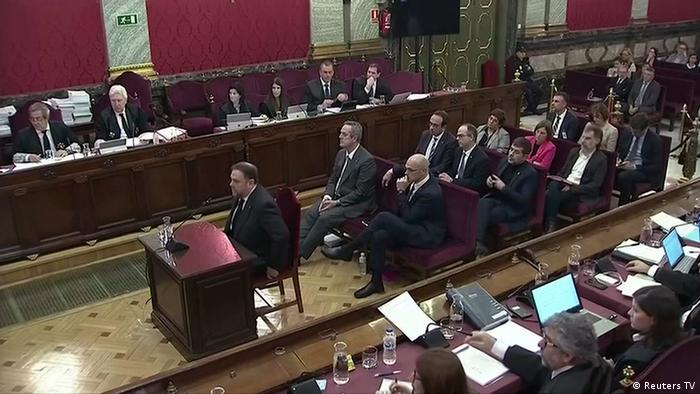 For ERC and PdeCat, a snap election is a gamble too. If the right wing parties win, the north-eastern region could face the application of article 155 of the Constitution, which happened last year under Mariano Rajoy's government, and which would give control of the regional government to Madrid. "If there is a right-wing government applying article 155, things would get ugly, as even Catalans that are not pro-independent would reconsider their position," said Magda Bandera, editor-in-chief of La Marea magazine.

Antonio Barroso, managing director of political analysis firm Teneo, says the trial of the Catalan separatist leaders "adds momentum" to the more radical wing of the pro-independence movement. "During the trial, it would be politically damaging for the pro-independence parties to be perceived as supportive of Madrid," he told DW.

The local elections on May 26 could complicate things still further. The internal competition between ERC and PdeCat, who want to topple Catalan mayor Ada Colau and take power in Barcelona, is growing. "For them, the Spanish political space is secondary. The Catalan government and the Barcelona City Hall is what really matters to them," said Pablo Simon.

The Spanish government has broken off talks with Catalan secessionists, with both sides accusing the other of intransigence. Prime Minister Pedro Sanchez had already faced criticism for agreeing to hold the talks. (08.02.2019)